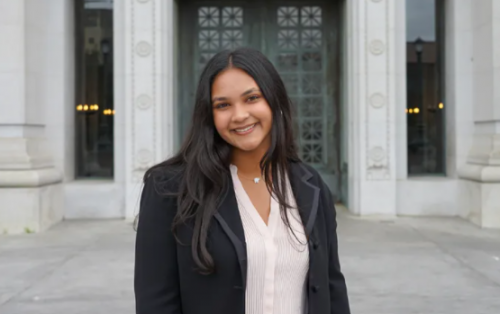 Sattar is double majoring in Political Science and Economics and believes her background and extensive experience make her a qualified candidate for ASUC* Senate. Sattar has worked in the ASUC* since her freshman year and knows what is required to effectively work on behalf of the students of UC Berkeley.

She was a member of both the Mental Health and Sexual Violence Commissions*, working with CAPS* and PATH to Care* to advocate and provide resources to survivors of sexual violence.

Sattar was Chief of Staff to current Senator* Ashley Rehal, last year’s South Asian endorsed candidate. Sattar has a detailed resume working within the ASUC* and advocating for all students on campus, especially the underrepresented South Asian community.

When asked what her first priority in office would be and the most pressing issue students at UC Berkeley face, Sattar explained that she will work towards “increasing representation in the ASUC among communities that have been historically underrepresented and left out of the conversation.” She believes this starts with having public conversations that bring the community together and allow for open dialogue in a safe environment.

Coming from an intersectional South Asian background, Sattar believes that she can best represent South Asian students in a way that can make members feel valued and supported on campus.

Sattar has clear and concrete actions that she hopes to achieve within each one of her platforms. In order to address her first platform (on increasing representation for the South Asian community), Sattar plans to host a speaker series and manage community circles to connect the larger Berkeley community with the South Asian community. In addition, she will be the UC Berkeley South Asian Caucus* Chair next year, which comprises the leadership of the 20+ South Asian organizations at Cal.

Another one of her action items for the South Asian community is to continue her previous work on securing funding for the South Asian dance teams to use Hearst Gym as a rehearsal space. Currently, the ASUC* no longer pays for space in the Hearst Gym. As a result, dance members practice in garages, which increases the risk of SVSH and overall safety concerns.

For her platform on increasing gender equity within pre-professional tracks, Sattar plans to collaborate with the Career Center* to hold more career fairs that feature more women from the South Asian community. She wants to increase professional workshops for female-identifying individuals as well as create resource guides for internships and other job opportunities. Bridging the gender gap in pre-professional tracks is something Sattar is ready to take on if elected.

Finally, Sattar’s goal for increasing mental health on campus starts with SVSH survivors. She wants to partner with PATH to Care*, University Health Services*, and CAPS* to establish survivor-centered approaches in all aspects of SVSH prevention, education, and support. If elected, one of her first tasks is to enforce mandatory SVSH education and prevention training among South Asian RSOs.

Sattar hopes to bring an intersectional lens to increasing representation for the South Asian community, further decreasing the gender divide on campus, and improve the mental health of survivors of SVSH.

*Titles for Identification Purposes only

Ineka Damen is a writer for the Vanguard’s Social Justice Desk. She is from Santa Barbara, CA, and is currently studying Political Science with an emphasis in American Politics as well as a minor in Public Policy at UC Berkeley.