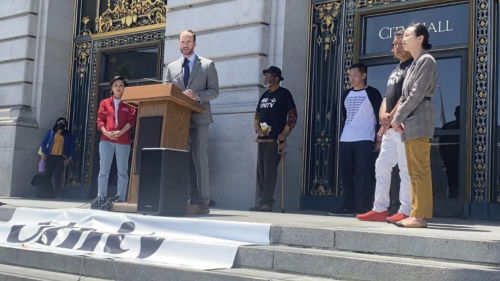 SAN FRANCISCO, CA – A rally on the steps of City Hall was held here Wednesday to “denounce racism and gun violence and to unite Black and AAPI communities,” according to the District Attorney’s Office. See here.

District Attorney Boudin said he condemned the efforts of some to divide Asian and Black communities rather than unite all communities against hate.

“We must remember as Dr. Brown said, racism and white supremacy have deep roots in this country. As far as we come, we have not come far enough,” said District Attorney Boudin.

He added, “We continue to see mass shootings and violence—large and small—targeting immigrants and people of color, and we continue to see many people use fear and division and language barriers as a wedge to divide our communities.

“Continue to expand the Office’s Victim Services Division and continue to request more funding at every city budget cycle;

“Continue the partnership with Attorney General (Rob) Bonta to get and keep guns out of the hands of those who pose a danger to themselves or others; and

“In light of the recent violent hate crimes that have happened in Buffalo, Orange County, and Dallas, targeting the Black and Asian community, and on the birthday of Vincent Chin, who was murdered in 1982 because he was mistaken as Japanese and blamed for the layoffs in the auto industry, we are here in solidarity to denounce hate and white supremacy in our all of our communities,” said President Shamann Walton.

He added, “We still have a lot of work to do in this country and in San Francisco to make sure that no one is targeted because of their race, color of their skin, gender, sexual orientation, age, religion or any other factor. We cannot do this work separated and we are stronger together with our communities united. Racism and white supremacy has no place in our society.”

“Thoughts and prayers are not enough to stop racism and gun violence—action must be taken now,” said Supervisor Connie Chan. “I support District Attorney Boudin’s stance on gun laws and his pursuit to prevent gun violence and ghost guns. I thank him for his crucial investments in victim services so we can prioritize the needs of victims and focus on criminal justice system reform.”