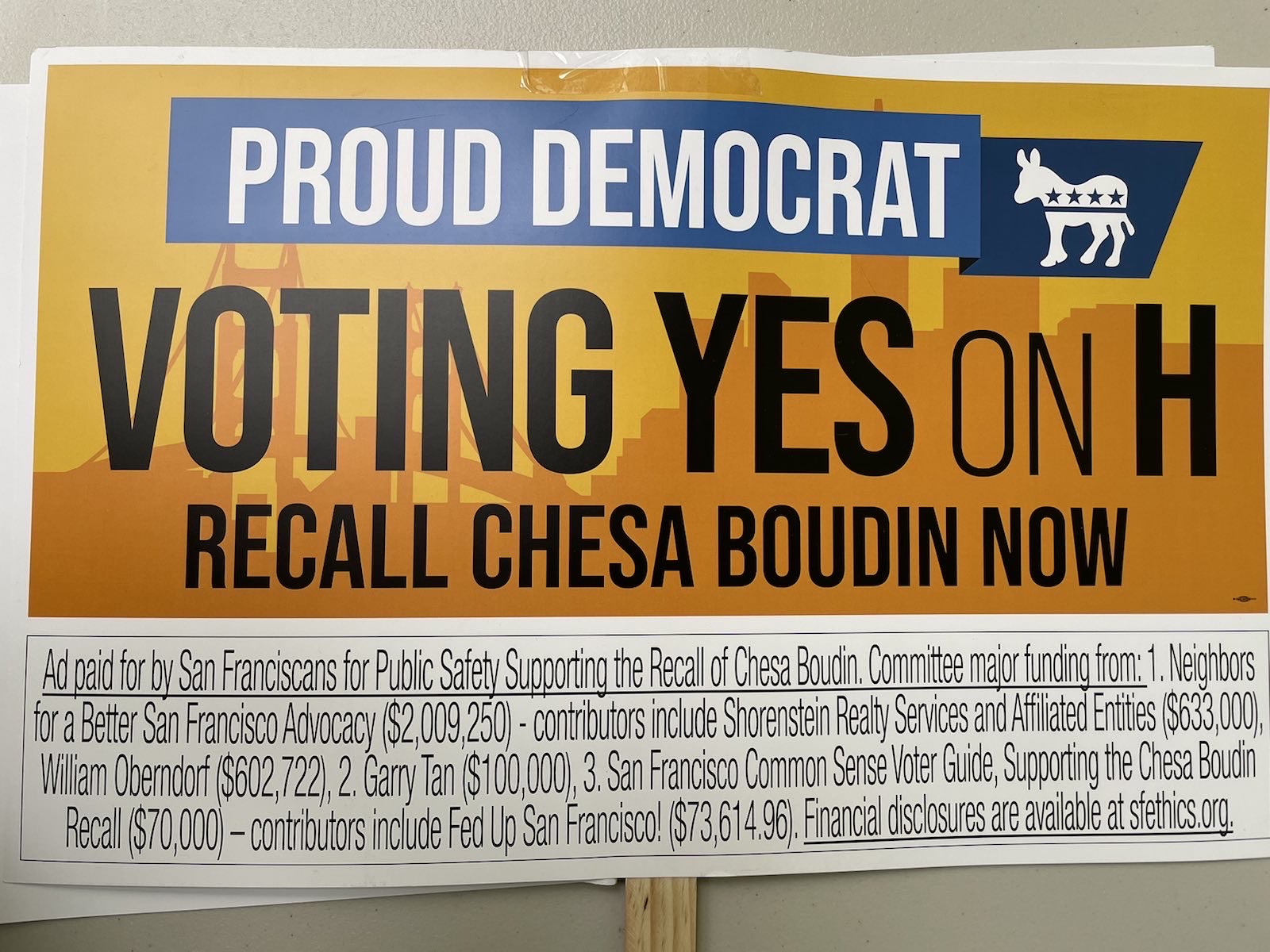 In February, the Democratic Party, voted 20-2 (with only two of Chesa Boudin’s former opponents and possible replacements dissenting) to oppose the recall measure.

“Despite that, recall proponents have sent voters material that clearly states the recall has the support of “San Francisco Democrats,” a

flat-out falsehood,” the party said in a release on Monday.

“The Yes on H recall committee is clearly trying to mislead voters that they have the official support of the Party. They do not,” said Anabel Ibañez, Co-Chair of the San Francisco Democratic Party’s Endorsement Committee. “In fact, we overwhelmingly oppose this recall. On the other hand, the San Francisco Republican Party has endorsed the recall. The Yes on H committee is welcome to use their name on any future materials.”

“We have an obligation as a Party to protect our name and our identity,” said Leah LaCroix, First Vice Chair of the San Francisco Democratic Party. “Voters look to the local Party for trusted information about our endorsements. The Yes on H campaign is violating that trust and is in direct conflict with the Party’s by-laws which requires authorized use of the Party’s name. We are asking them to immediately stop this misinformation campaign.”

“The Yes on H recall committee is blatantly lying to voters,” said Keith Baraka, Second Vice Chair of the San Francisco Democratic Party. “Sadly, it is just the latest in a series of lies they have told voters. Most recently they even claimed that District Attorney Boudin was somehow responsible for a bar that closed before he was even elected. They’ve spent millions of dollars to disseminate these lies and while we cannot stop them from taking contributions from Mitch McConnell donors, we can stop them from misleading voters about where the Democratic Party really stands.”

On Monday evening, the Vanguard spoke with Peter Gallota, Vice Chair of Partnerships who provided the news site with several examples of the campaign material in question.

Two of them say, “San Francisco Democrats agree…” with the recall and use the likeness of the Donkey, the official mascot of the Democratic Party.  Another one states, “Proud Democrat Voting Yes on H” “Recall Chesa Boudin Now” and also has the donkey.

As Gallota pointed out, this isn’t just an astroturf group.  Rather the ad is paid for by San Franciscans for Public Safety Supporting the Recall of Chesa Boudin and lists their major funding sources.

“That’s the primary committee that is in support of the recall,” he said.  “They’re using imagery like the donkey, which we often see used as a reference to the Democratic Party.  They’re using that kind of imagery and making claims that San Francisco Democrats agree on the recall.”

There is nothing new about this of course.

“This is kind of unfortunately, a tried and true tactic that has been utilized over the years,” Gallota said by phone.  “Since we’re a really blue city, the majority of voters in San Francisco are Democrats. So having the say Francisco democratic party’s endorsement really means something.”

In addition, the Recall Campaign has been attempting to sidestep charges that they are funded heavily by out of town, Republican interests and that only one elected Democratic Official has endorsed the recall.

Why a cease and desist?

“I think it’s our job as the San Francisco Democratic Party to protect our brand, which is trusted amongst voters in the city,” he said.  “We recognize that not everyone may agree with the party’s endorsement.  But we want to make sure that the voters know who the party has endorsed officially or not.”

But why did they wait until two weeks before the election to file this?

“We wanted to get out there sooner,” he explained.  “We had to make it work with our legal counsel, just to advise on the letter to make sure we had the letter fully drafted and reviewed.”

He added, “We felt strongly that we still needed to clear up the confusion.”

He also pointed out that while this has been going on for month, the ballots dropped just a few weeks ago and now we are in crunch time.

“We were really focused about getting our mail piece out so that we could counter what was happening.  And we wanted to also make sure we were making this statement and preventing hopefully any sort of additional misleading campaign mailers going out because we know this next few weeks is also kind of a blitz period where a lot of information is going to be put out.”