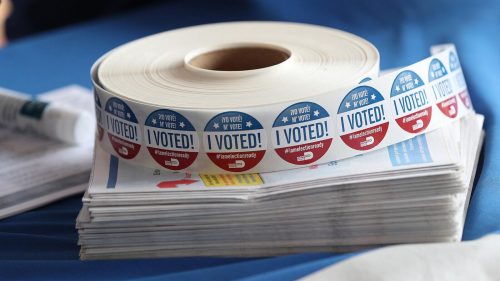 WASHINGTON, D.C – A national poll has revealed that 56 percent of voters “[support] a law to guarantee the eligibility to vote for all citizens 18 and older.”

The survey was run by Lake Research Partners and commissioned by Stand Up America, The Sentencing Project, Common Cause, and State Innovation Exchange to explore what voting rights voters supported.

According to survey results, questions included whether or not voters believed that voting rights should be restored to “citizens completing their sentence, both inside and outside of prison.”

Noted the Sentencing Project, “5.2 million Americans are forbidden to vote because of felony disenfranchisement, or laws restricting voting rights for those convicted of felony-level crimes.”

Nicole D. Porter, Senior Director of Advocacy with the Sentencing Project, said, “This poll reveals that the majority of Americans believe the right to vote should be guaranteed for every person in our society – including those who have been impacted by the criminal legal system.

“It is time for lawmakers to listen to the will of the people and guarantee voting rights for people who are currently incarcerated and those with felony convictions,” she added. “We cannot continue to allow the state to take away our citizens’ inalienable right to cast their ballot in our democracy.”

The survey revealed, even when “felony convictions” was used instead of “completing their sentence,” the majority of voters preferred allowing all citizens impacted by justice to vote.

“The data confirms that most voters—a majority, in fact—are ready for a country where the right to vote is truly guaranteed for all Americans,” said Daniel Gotoff, Partner at Lake Research Partners. “Voters believe that every citizen of the United States has an obligation and a duty to vote and should have an equal say in what happens in our country and our community.”

He continued, “Denying Americans the ability to vote not only denies a right, but it denies them the ability to fulfill their civic obligation to our democracy.”

Carmen López, Senior Director of Democracy with the State Innovation Exchange, added, “The poll demonstrates that a majority of voters believe it is all of our responsibility to protect the freedom to vote, including the freedom of individuals who are completing their sentences in and out of prison.”

“The State Innovation Exchange will continue to work with movement leaders and legislators to build the shared power needed to protect the freedom to vote,” Lopez added.

When studying trends, the poll showed support was generally high among voters who were young, Black, or Latino, tied to the criminal system through a work connection, or had personal involvement or connections in the criminal justice system. This support remained regardless of which term was used.

Fifty-three percent of independents, 50 percent of white voters, and 54 percent of non-college educated voters also agreed. Overall, a majority of voters—54 percent—agreed with the aforementioned statement.

“Guaranteeing the right to vote for all citizens, including those who are incarcerated, keeps people involved in their communities and gives justice impacted citizens a political stake in them when they return home,” said Reggie Thedford, deputy political director of Stand Up America.

“If citizenship does not stop at the prison gates, neither should the right to vote,” Thedford maintained. “It’s time for our country to reject the remnants of Jim Crow and commit to safer, more equitable communities.”

The survey also found that 34 percent of voters had no idea whether or not incarcerated citizens in their state could vote. Similarly, 33 percent were unaware of how past felony convictions impacted a citizen’s ability to vote.

“Americans have made it very clear that they believe no father, son, mother, or daughter, should ever lose the right to vote, once they become eligible,” said Keshia Morris Desir, Common Cause Census & Mass Incarceration Project Manager. “For too long voting rights have been the privilege of select Americans.”

“Poll taxes, literacy tests, and property ownership have historically been barriers to the right to vote, now felony disenfranchisement is the most pervasive form of voter suppression.