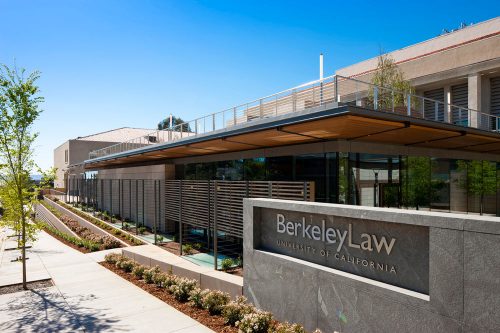 The bylaw indicates that the club “includes a Palestine-centered and de-colonial approach to holding club activities,” including the omission of Zionist speakers and events that promote Zionism and public stipulation of anti-racism and anti-settler colonialism. While supporters of the measures hold they are important for the safety and security of Palestinian students, in the last few weeks the groups have faced backlash and threats for their stance, with claims that their anti-Zionism equates to anti-semitism.

The response from the Berkeley Law Faculty has been restrained. The faculty released a statement defending students’ right to free speech yet condemning the groups for anti-Zionism, which they believe goes against a core component of Jewish identity. Furthermore, supporters of Zionism like Noa Tishby have come to campus and released viral videos like this one looking to question pro-Palestinian students on their stance without addressing the issue that was most central to the establishment of the bylaws—apartheid in Israel.

Multiple anonymous students from the law groups who signed the bylaws have also noted a double standard in the school’s response. The students in these groups have faced death threats over email, sexual assault threats, and threats to employment from various companies should they continue to support Palestine publicly. Many students, especially student leaders, are also getting threatened by name, as pro-Zionist students have used Callink (the UC Berkeley student organization database) to look up the members of the organization and dox them, which is illegal in California.

Such action has forced some students to leave their clubs and remove all affiliations with pro-Palestinian stances for fear of losing employment and other opportunities. The students of these groups have been extremely clear on their stance: they are not prohibiting speakers on the basis of race, religion, or sexual orientation, but based on pro-Israel viewpoints that can be extremely harmful to Palestinian students.

Furthermore, anonymous sources have stated that Jewish students and organizations themselves have expressed support for the bylaws, furthering the argument that the bylaws are not religious/racial discrimination but a condemnation of colonialism. Thus, these students have noted that the dean has seemingly denounced their stance on Israel but claimed their access to free speech, and then also inadequately addressed the harassment these students have faced in the first place.

This is not the first time the issue of Israeli apartheid has manifested on Berkeley’s campus. CAIR (Council on American-Islamic Relations) noted that in 2020, there were multiple instances of harassment and abuse towards pro-Palestinian voices on campus. In a February 2020 statement, Bears for Palestine wrote “in the past week, a hijabi woman was spat on, and another had her hijab torn off her head. A Black student was attacked with urine, another student was followed home, another was called a ‘terrorist sympathizer.’” At an ASUC meeting regarding censorship, “a Palestinian student who spoke during the public comment session was spit on while giving a campus tour to Yemeni students from an Oakland high school. In the ensuing weeks, the student felt unsafe walking on campus.”

Another Palestinian student was told by an ASUC senator that the senator would “personally make sure that she was added to the blacklisting site Canary Mission. As a result, she was unable to participate in the public comments for fear of being recorded and doxed, and in the ensuing weeks, the student had difficulty sleeping and experienced nightmares of her family being doxed, getting hurt, and no longer being allowed to visit family in Palestine.” An anonymous student at an ASUC meeting in February told students that he plans “after [he] graduates, on joining the IDF to eliminate Palestinian nationalism and Palestinians from the world.” These are only a handful of instances of stress, harassment, and violence that have been reported.

The adoption of the bylaws remains a contentious issue at the UC Berkeley campus, and it remains to be seen whether and how the university will uphold the safety of Palestinian students as it relates to the student community as a whole.