Davis, CA – The Council, while not being asked to vote yet on the final Climate Action and Adaptation Plan, will get an opportunity this week to weigh in and provide further direction to staff.

The CAAP gained a lot of attention because of the controversy surrounding the proposed building energy action, “electrification at point of sale” which was modified based on community input.

In mid-October, the city announced that this requirement would be modified, eliminating the point of sale electrification approach, eliminating “the proposed three-year timeframe to develop and adopt a point of sale ordinance and to focus instead on voluntary existing building electrification, using education and outreach materials and development of incentives to help property owners make informed decisions.”

In May 2022, the Council approved the 2020-2040 CAAP prioritized actions which included 28 actions in combination of mitigation and adaptation which were reportedly developed through extensive community engagement along with professional review. 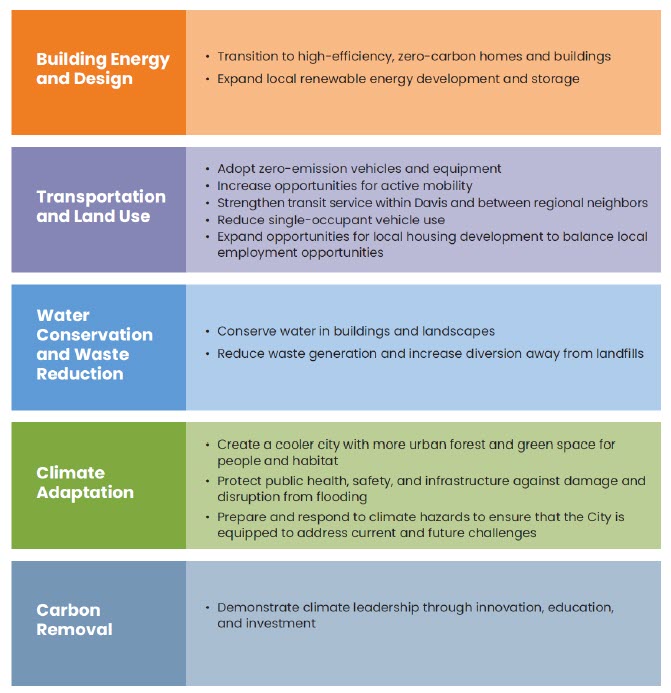 According to the staff report, “The 2020-2040 CAAP identifies a measurable, enforceable, equitable and implementable path to carbon neutrality, and will also bring Davis into compliance with state legislation related to climate action and General Plan requirements. The CAAP identifies maximum efforts to implement carbon reduction actions by 2030, in alignment with state goals and City Council direction.”

Staff also noted that CAAP is “founded on the premise that Davis carbon neutrality by 2040 is achievable with strong leadership and a community engaged around a common vision, yet this 2040 goal will need further study and deeper commitments as implementation evolves.”

Staff acknowledges, “While it may not be possible to provide certainty about goal attainment at the outset of implementing actions, the CAAP structure is in place to

The City anticipates “that there will be emerging technology, funding and partnering opportunities from regional, state and federal organizations over time to help Davis accomplish climate action and adaptation goals. To this end the CAAP is a living document and is expected to adapt over time as these evolutions unfold.”

Funding and financing are important considerations.  Staff notes the city is “developing a three-year grant strategy to identify specific opportunities that staff would like to target for grant applications.”

The biggest change at this point is the change in the electrification mandate.

City staff said that they heard from multiple community members and business leaders, including those in the real estate industry, “that point-of-sale electrification would hinder and place undue burdens on those wishing to sell their home.”

Research and develop an ordinance requiring building energy efficiency upgrades and electric (or other non-fossil fuel) equipment replacement at time of sale for residential and commercial properties with a defined implementation schedule for ordinance requirements. Develop Home Energy Score (HES) program. Include specific provisions for low-income and vulnerable populations. Address financing/incentive options. Preferred approach is to start immediately with voluntary implementation supported by education and outreach; transition to mandatory requirements by 2025.

Draft Action A.2 will now read:

Provide education and outreach to assist property owners in making informed decisions for building energy/efficiency upgrades (including information about replacement with electric or other non-fossil fuel equipment replacement) for residential and commercial properties, including any existing or anticipated incentive and financing programs. Develop a Home Energy Score (HES) program. Include specific provisions for low-income and vulnerable populations.

Even with the change, however, there is some controversy.  In an op-ed in the Enterprise this week, Nick Marin of the Yolo County Association of Realtors, while acknowledging that climate change “is a problem and without some action will get worse,” took issue with the city approach.

He wrote, “While mandatory point of sale measures requiring gas appliances to be retrofitted with electric appliances has reportedly been removed from consideration other mandatory measures still play a prominent role in the important proposal. It clearly places the cart before the horse.”

Marin writes, “The CAAP relies heavily on what has come to be known as ‘end of useful life’ which would require, at some level, residents replacing broken or worn out gas appliances with electric models. In theory it makes some sense especially when we understand that the sale of certain gas appliances may be banned by the state or other jurisdictions. However, the mandatory nature of the measure will doom it to fail.”

“Our experience tells us that this simple retrofit from a gas to electric range could cost as much as $15,000 or more,” he argued.  “Again, we aren’t denying climate change nor are we suggesting that a climate action plan isn’t imperative. We merely want to change the focus.”

Instead, he argues, “We’d like the City Council to direct staff to design and develop a program in which City vetted contractors would be given a package of incentives to offer homeowners swapping out gas appliances for electric equipment voluntarily.”

3 thoughts on “Final CAAP Comes to Council This Week – But Even with Changes to Electrification, There Still May Be Pushback”