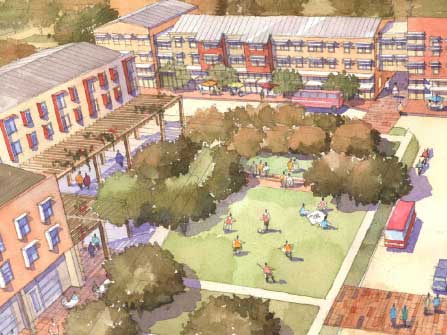 As construction has already begun on West Village, the issue of annexation becomes more urgent.  There are philosophical reasons to support the notion of annexation.  Namely, you would have a large number of residents living on the city’s edge who are effectively disenfranchised from municipal decisions.  The first part of the project calls for about 1000 students houses and another nearly five hundred homes.  This would be workable but far from ideal.

There are also fiscal considerations that make such an annexation very difficult.  The county, the university, and the city all have fiscal stakes in the outcome no matter what is decided.  This report will briefly highlight the city staff report and also discuss the consequences that could occur in the future.

Back in April of 2007, at that time Mayor Sue Greenwald supported a very basic motion:

“It shall be the position of the City of Davis that annexation of the University’s West Davis neighborhood is a goal that we strongly support in concept.”

However Councilmember Don Saylor led the charge to shout it down:

The irony of course is that the reason no staff analysis existed at that time, was that the council majority refused to allow this to be agendized as a normal agenda item and instead had to be brought before the council as an item submitted by a councilmember which allows for no staff work to be done on it.

By June there was a full staff analysis that laid out the costs to the city as well as the complexity of overlapping jurisdictions.

However, what pushed council to support the annexation in concept was the fact that in May of 2007, ASUCD passed a resolution in support of annexation of the West Village Development and it was read into the record.

As a result, the council passed a serious of motions to affirm direction to pursue annexation of West Village project if it could be accomplished in a manner that was fiscally feasible with a goal of fiscal neutrality.

One of the motions included the appointment of a Council Subcommittee to discuss potential revenue-sharing options with the UC Davis campus and property tax sharing options with Yolo County that would cover the costs of key urban services and return no later than mid-September with information needed for the City Council to make a final determination on whether to annex the project area.

There are several key findings in the new staff report.

First, it was the Council subcommittee’s assessment that revenue-generation potential for the West Village project is insufficient to cover short and long term costs to annex and service West Village under likely service arrangements that have been identified to date due to the projected average assessed value for the 530 single family unit and the 1,980 student apartments that will be tax-exempt that in sum total, fall well below the break even point for fiscal neutrality.

Second, annexation without the City assuming many of the services typically provided within the annexed area (to achieve fiscal neutrality) may create circumstances whereby future West Village residents might approach the City with service/governance issues that the City would have minimal control over. Land use is a primary example. Given that one or both public safety functions are also likely to remain a UC Davis provided service due to fiscal/service cost issues, the City would not have direct oversight on those functions and would result in a smaller type of disconnect. The Council must consider whether good governance is forwarded in a scenario whereby they City annexes West Village but provides few if any primary services.

Third, legal and practical factors may hinder the ability to facilitate annexation without concurrence and agreement of all three entities. UC Davis has been clear that agreement between the City and County would be necessary for them to consent to annexation. Without UC Davis consent, the annexation cannot proceed. The County was clear in their most recent communication on this matter, that they will not concur with any scenario that reduces their potential revenue below what is available under the nonannexation scenario.

Staff report argues that while the city could challenge the County’s stance during property tax sharing negotiations as part of the annexation process, there is little case history to suggest that the city would be successful.

Finally the suggest reaffirming interest in working with UC Davis on a new agreement:

In summary, while there are many reasons (civic engagement, integration into community culture, etc.) why staff and the Council have supported the annexation of West Village, at a conceptual level, since the project emerged in the early 2000’s, we are confronted with fiscal and service realities that make annexation feasible under only very limited scenarios, and even those have potential negative consequences to the City from either a cost and/or service delivery standpoint. We simply have not been able to evolve a scenario that addresses prior council direction to strive for fiscal neutrality and develop sufficient revenues to meet short and long term service costs. The City could simply absorb some of the costs like we have with some affordable housing projects. However, West Village is a much larger project than these projects and it is also much larger than Aggie Village, which is probably the closest example of the type of equity controlled university project. This renders potential annual fiscal costs with West Village higher and more difficult to absorb, particularly given today’s already challenged fiscal environment. Staff would certainly be willing to continue negotiating and exploring options that might lead to annexation of West Village. This willingness is tempered by the reality that nearly 10 years have elapsed since discussions began with an acceptable solution yet to emerge. If the Council were interested in continued exploration of this matter we have about one year left before it would become impractical based on West Village’s current construction schedule.

We should also go back to 2007, the city’s finance director, Paul Navazio laid out the fiscal reality.

“The current assessment of the fiscal analysis, on the operating revenues and the operating costs, is that overall the project does not generate sufficient revenue to cover costs.  But, it generates more revenue under an annexation, than in a non-annexation.  If the city with council direction sat down with the campus to explore revenue sharing or supplemental revenues, to help off-set the city costs, it’s our sense it would be potentially cost effective from a fiscal standpoint and it would cost the tenants and the residents less and make-up the costs of the campus providing services.”

In other words, the project will lose money regardless.  However, it does generate more revenue under an annexation than a non-annexation.  That would suggest it would be in the university’s interest to find a revenue and cost sharing plan to make annexation work.

If the project is not annexed, the fiscal analysis prepared for the West Village project suggests that – at build-out – the City would receive a modest annual fiscal benefit in the range of $220,000, largely from increased Sales Tax revenues contributed by project residents to the local economy. Conversely, under the “base case” annexation scenario where the City provides all municipal services (except utilities) the City would incur a short-fall – at build-out – of approximately $600,000 per year.

Several “hybrid” annexation scenarios have been evaluated with the goal of providing cost effective municipal services while mitigating fiscal impacts for the service-providing agencies.  Included among these are scenarios where the campus would continue to provide Police and/or Fire services, with the West Village project either exempt from selected City taxes as well as significant local property tax collected by the City essentially rebated to the campus to offset these service costs. However, the scenarios evaluated to date all assume that the County would accept a tax-sharing agreement whereby they would forgo any fiscal benefit it would realize under the non-annexation scenario.

Moreover, even if a fiscally neutral annexation scenario were to be developed, based on the projected funding gap at build-out, a refinement of the fiscal model to reflect the City’s approach to fiscal neutrality for development project suggests greater challenges. The projected shortfall for the City under the base case annexation scenario – using constant dollars – grows from $600,000/year to approximately $1.5 million per year. In addition, this gap would continue to grow, post build-out to over $2.0 million within six-years after build-out. To date, consideration has not been given to addressing either the “current dollars” shortfall that would accrue to the City at build-out, nor the requirements to ensure that the City would remain fiscally neutral beyond the build-out time frame.

The fundamental challenge from a fiscal perspective is West Village’s affordability goals. Homes intended to sell for less than market rates generate lower property taxes. While at buildout the 530 housing units representing market-rate cottages and single-family units are expected to have an average assessed value of over $400,000, the student apartments would not be owner occupied, and thus these would be tax-exempt, University-owned housing units. Both the affordability level and tax status of the overall project, yield a ‘taxable” average assessed value per unit of less than $250,000 for the entire project. This assessed value is well below the value required for the City to “break-even” relative to the cost of providing municipal services. The general challenge of residential development of achieving fiscal neutrality is therefore exacerbated in West Village.

The key hang up at this point seems to be the county.  The county of course has been looking for revenue sources in part because they were losing money even before the latest fiscal crisis.  Without the county’s support this appears dead in the water.

From a fiscal standpoint, one could understand the county’s reluctance, but to me it makes little sense to create a huge urban enclave on the outskirts of existing development that is not in the city.  That seems to go against most land-use policies.

Moreover there is the enfranchisement issue as people who live on the outskirts of Davis will be Davis residents in most senses, relying on food and other services for their livelihood but unable to vote on municipal policies that impact them.

However, the overall problems of multiple government entities fighting over a very small pie may make annexation an impossibility.  At the very least it probably takes the decision out of the hands of the council, although certainly with forceful advocacy, the idea may become more workable.

Share:
Previous : End of the Line for Yolo Judicial Watch
Next : Commentary: The War Against People by Our Own Government