Voters in Davis will go to the polls today if they have not already voted by mail.  Turnout figures to be on the low side, although probably higher than the Measure P election and also the 2008 City Council Election.  It is one of those instances where the actual stakes exceed the level of passion and commitment from the voters.

As we surmised yesterday, perhaps one reason why the voters are not nearly as engaged as they have been in the past is twofold.  First, growth seems to be off the table and growth has always been the instigator of contention.  However, we also know that growth being on the table in November, while it created a polarized electorate, or at least a contentious one, it did not drive out voters.

Second, the voters do not perceive a huge difference between the candidates.  I would dispute that, but there is something to be said for the rhetoric being similar.  Moreover, one of the issues that might have created that wedge, firefighter money, never materialized.

The four biggest things at stake right now are the budget, the roads, Measure R, and Measure Q.

From our standpoint, the city is facing an unparalleled fiscal crisis.  The genesis of the fiscal crisis was born in a period that began around 2000 that saw huge increases in the amount that we contributed to pensions and retiree health care benefits, neither of which have been fully funded, and both of which may well come due in the next five years.  The second problem has been the explosion employee salaries, led by a 36% pay increase over four years for the firefighters back in 2005.

What we see is from 2003-04 to 2007-08 was an explosion of costs for employees.  These were funded by two factors.  First over that five year period, the property tax revenues in the city nearly doubled, at the same time the city passed a half-cent sales tax that added $3 million in revenues, all of which went to employee salary increase despite promises that it would go to provide “additional police protection and meet park and recreation and open space commitments we have made to our citizens.”

The problem is now, we are in a flat revenue situation.  The real estate market is not expected to recover, sales taxes are flat or declining.  We may get a temporary bump from Target, but that is not going to be a sustainable increase in revenue.

At the same time, costs continue to increase.  The current MOUs temporarily decreased spending in the initial year, but increase spending in the subsequent years, meaning the savings that the city has boasted about is going to decrease over time. 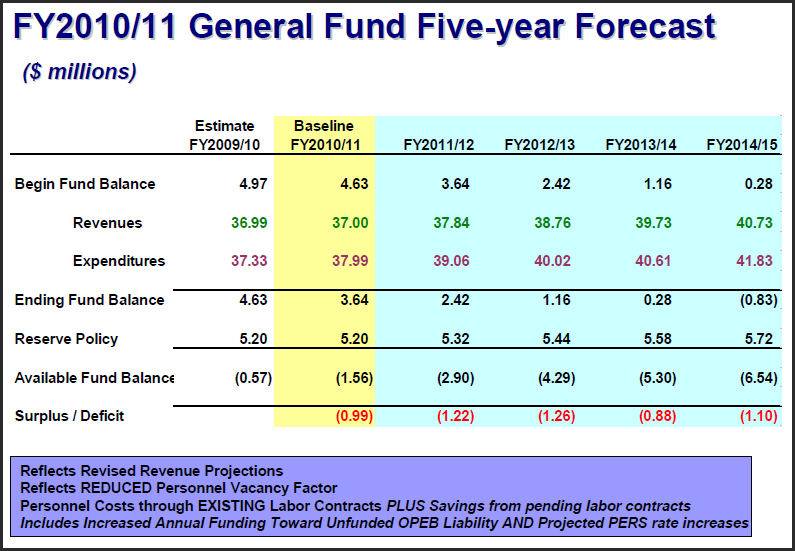 No one wants to talk about this, but our budget forecast not only contains a year deficit, but it also projects that our revenue will increase by nearly $4 million over the course of the five years.  After a flat revenue project for the 2010-11 budget, we are projecting modest increases the next four years.  Meanwhile expenditures are also expected to increase over the next four years by four million.

That is based on the failure to arrest two key trends.

First, we have a $60 million unfunded retire health liability that we will have to pay off, which means four million in additional dollars over the next thirty years, assuming health premiums do not increase in that time above what has been projected.

Our pay-in contribution numbers figure to increase by large margins over the next five years. 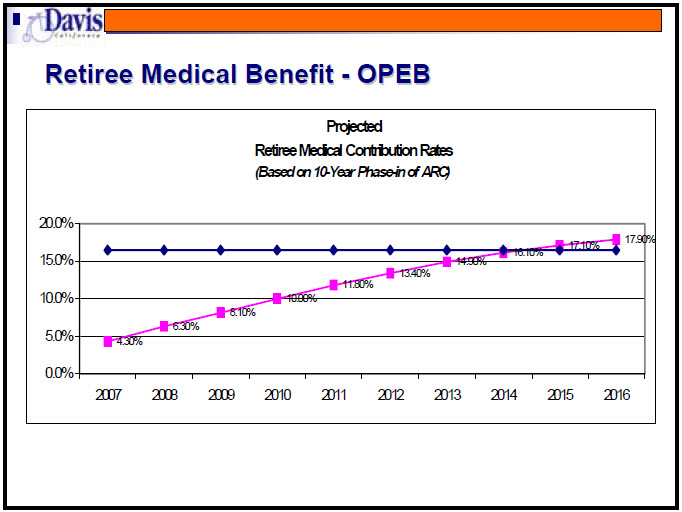 However, we have reason to believe the amount budgeted for retiree medical set-aside is too low.  And we will have to pay in more than is currently projected.  Moreover, as we slowly creep up the spending side, the question is, at what point are we actually fully funding future liabilities and then at what point are we actually putting money towards closing that $40 to $60 million liability.  From our standpoint, we have done too little to arrest this trend. 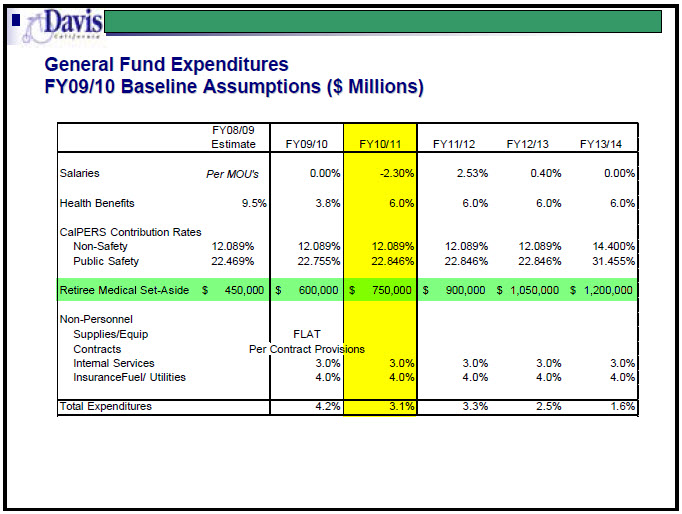 Second, we have an increasingly large portion of the city’s PERS contributions that we have to pay.

Since 2000, PERS contributions have exploded from less than $1 million to nearly $8 million per year.

The city plans to try to slowly raise the rates, so that the rate increases are somewhat smoothed. 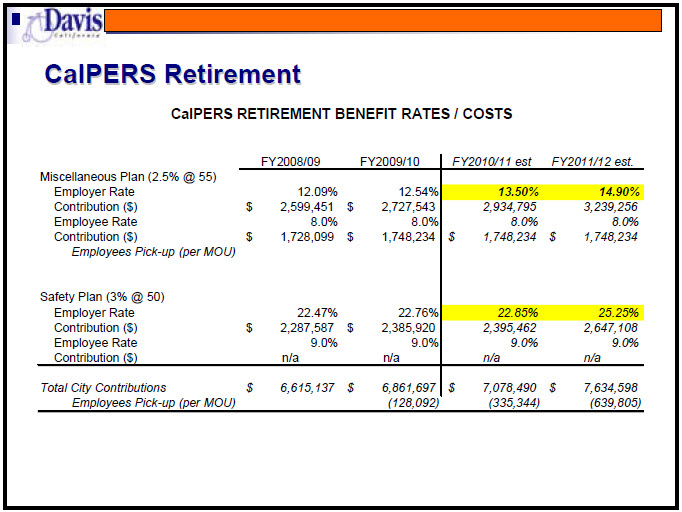 So just by 2011/12 they are projected $7.6 million in total city contributions.  But the problem appears to be two-fold, the worst rate hikes will take place after that time, we may be underestimating the PERS rate increases, and we have done little to arrest the overall trend which has seen nearly an 8-fold increase over the last decade.  If we continue to increase our PERS costs by half a million to a million for year, we are looking at doubling our current costs by 2015-16.

Right now, the city’s budget is banking on the fact that PERS will not downwardly revise it’s 30 year growth projections.

The other problem is that the city’s deficit underestimates the actual shortfall in terms of delivering needed goods and services.

Two years ago, the city of Davis gave a dire report where they talked about nearly $6 million in unmet road repair needs.

“The cost to maintain or repair roads exponentially increases as time goes on,” the report continued.

For years, the city has operated on a budget of $800,000 per year for road repairs when the actual costs were closer to $2 million.  Now that $800,000 is going down to nearly a third of that for this year and there is no available money after this year for future road repairs.

Acting public works director Bob Clarke reported two weeks ago, “In addition to the staffing cuts our approximately $1 million a year road maintenance budget is down to $250,000 next year, which won’t buy us much pavement out in the field next year.” 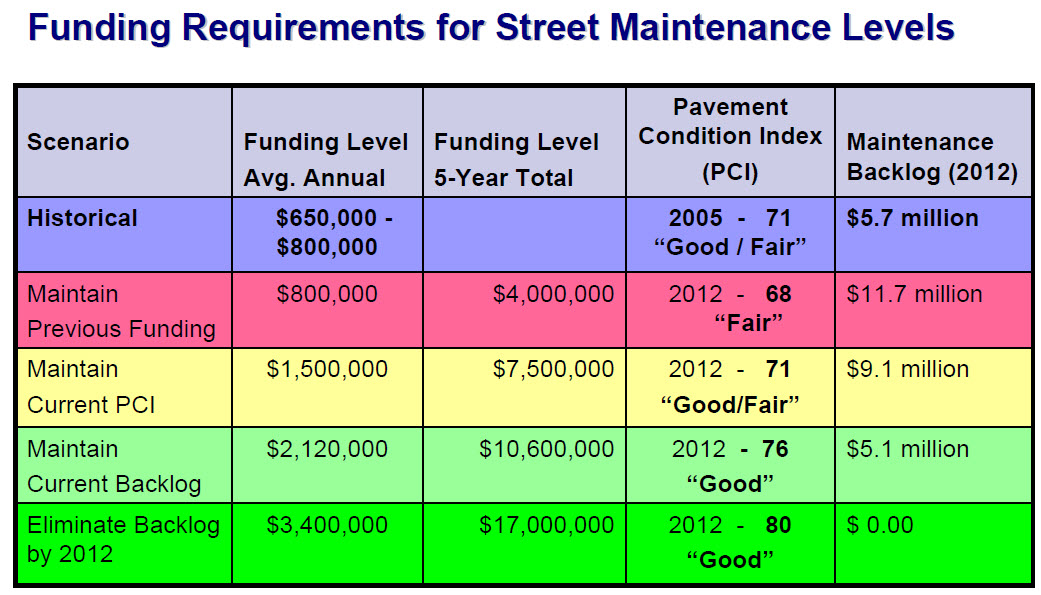 The bad news, just by maintaining previous funding levels will build the backlog to $11.7 million up from $5.7 million by 2012.  That would reduce our PCI (Pavement Condition Index) to 68 which would be fair, it’s currently 71, (Good/ Fair).

Our analysis right now shows about one-third of Davis’ streets at a rating of 50 or less.

The worst news is that number does not reflect the $250,000 for this year or the zero which is the amount of money we have after this year.

The budget and the city’s roads are not the only things at stake right now.  Davis Voters have two ballot measure to consider.

Measure R is the renewal of Measure J.  Despite the depressed housing market, we see the current council continuing to support additional development projects.  In the months after Measure P was handily defeated, the council has not gotten the message it appears.  They have already approved Willowbank, rushing through the process despite concerns from neighbors and despite the lack of need for a 29 unit project.

We have also seen the council agree to extend the entitlement on nearly 300 units that have been approved but not built.

In order to convince developers to build, the council is now considering lowering the impact fees for Verona, approved in 2008, by nearly half a million.

While we are hopeful the new council will at least moderate their views on land use, we know that without Measure J in place, the city would be facing a lot more growth pressures than it.

They continue, “Ten years later the pressure to sprawl remains very strong—and, if the recent past is any indication, a return to the old planning process prior to Measure J would again result in more ill-timed, ill-sized and ill-conceived projects.   Without Measure J the planning process would again be unable to manage peripheral development pressures in ways consistent with voters’ vision of Davis as a small city surrounded by agricultural and open space land.”

While Joe Whitcombe has created a little interest and controversy with some of his statements and tactics, the fact remains that Measure R is largely unopposed.  All five of the current councilmembers support it as do the five council candidates.

In 2004, the voters of Davis passed a half-percent sales tax measure.  It was supposed to, as we discussed above do two things.  First, it would prevent service cuts.  Second, it would provide “additional police protection and meet park and recreation and open space commitments we have made to our citizens.”

Sounds good, but that is not what happened as we described above, nearly the entire increase went to pay for the firefighter’s 36% salary increase.

Based on this and the lack of ability of the city to achieve the needed savings on their latest round of negotiations, it seems like this would be an easy no vote for me.  And indeed for a number of people it will be.

The problem that we face, is that I have yet to see a good analysis of what happens to city services if we cut $3 million at this point.  Employee bargaining negotiations are largely off the table for the next few years.  Whether the employees would be willing to talk about reduced salary without having to face massive amounts of layoffs is questionable and speculative.  It took three years of layoffs at DJUSD to get the teacher’s to take just $1 million in salary concessions.

Employee compensation accounts for 71% of all general fund spending, so if we do not cut compensation, we have to reduce our workforce. 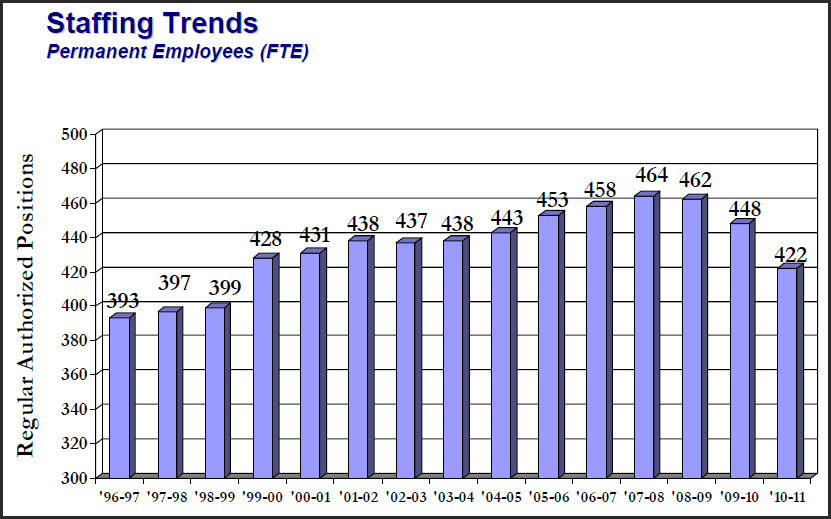 Already we are at our lowest staffing level since 1998-99.  That is in absolute terms without accounting for population changes.  That has mostly been achieved through attrition, taking advantage of retirements.  While we have terms things re-organization, most of it has taken place without planning.  There has been some shuffling of positions, but the bottom line is that we have no really had to lay off more than a few handfuls of people.

That will change.  The question is how that will impact our vital services.

Ultimately the voters will have a choice to make between the appeal of sending the city a message for fiscal mismanagement and hamstringing a new council that had little to do with this current mess.

These and other decisions are ones that voters will have to ponder as they step into the polls.

4 thoughts on “Stakes Are High As Voters Hit The Polls”