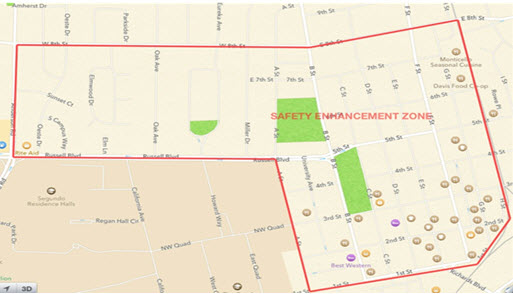 “In an effort to change the culture of Picnic Day, city and university officials, along with both police departments and community members have been working  to prepare for the April 20, 2013 Picnic Day,” a press release from the Davis Police Department reads.  The city council has renewed the “Safety Enhancement Zone” for the downtown core area for Picnic Day 2013.

The 2013 Picnic Day resolution has already been approved and will go into effect April 19 at 6pm and end on April 21 at 6am. Those who are cited for possessing open containers of alcohol, urinating in public, violating the smoking ordinance, and violating the general noise ordinance in the safety zone will face a minimum fine of $408.00.

According to the release, “City and university officials have worked together with their communities through various workgroups to find effective ways to address the issues identified as being problematic and bring forth solutions.”

One such effort from the Davis Downtown Business Association (DDBA) and Davis Chamber of Commerce resulted in the drafting a covenant, which has been distributed to all alcohol licensees.

The covenant “obtains a commitment from those who sell alcohol to refrain from offering drink specials, refrain from engaging in  the sales of alcohol early in the day/morning, and refrain from creating a nightclub atmosphere.”

The full covenant can be viewed on the DDBA website. So far, sixty-eight businesses have signed on to participate as covenant signers.

City and university officials, police representatives, and community members have been reaching out to community groups to educate them on what to expect, come Picnic Day. The Davis Police Department, the University of California at Davis Police Department, and staff from the UC Davis Safe Party Initiative have been working with student groups in an effort to provide educational materials on hosting responsible, safe parties.

According to the release, “This will be accomplished through the distribution of ‘party packs’ to identified apartment complexes and residences that have a history of Picnic Day parties or party complaints.”

Debate Over Effectiveness of the Measure

The question is how effective past practices have been.  While the scene was completely out of control in 2010, tougher enforcement and student-led campaigns like “Handle Your Sh**” reduced the most serious offenses down to nuisance and drinking citations for the most part in the last two years.

Columnist Bob Dunning wrote on Wednesday, “When I first heard about the ‘Safety Enhancement Zone’ the city has set up to deal with Picnic Day drunkenness, debauchery and just plain bad behavior, I figured this zone would be a safe-and-sane sanctuary where families with young children could put down a blanket with a basket of food and sit back to enjoy the festivities.”

“Turns out I have it all wrong,” he argues.

“Figures don’t lie,” he writes, “turns out that during Picnic Day 2012, police issued 72 citations within the Safety Enhancement Zone and only 44 citations everywhere else … in other words, there’s a whole lot more lawbreaking taking place inside the safety zone than outside … seems to me it’s much safer to keep the family as far away as possible from this clearly misnamed territory …”

The figures may not lie, but without rigorous scrutiny they do not mean a whole lot.  By looking only at the number of citations and their location, Mr. Dunning missed crucial intervening variables.

First, Mr. Dunning assumes that the number of citations indicates the frequency of lawbreaking.

But there are additional variables he fails to consider.

First, in order to give someone a citation, there must be a law enforcement official who observes the law-breaking activity.  While the city calls in additional law enforcement officers from around the region on Picnic Day and they patrol the entire city, it is also true that a huge amount of the police are centered in the core area.

More police in the core area – the safety zone – means the higher the percentage of those lawbreakers being caught, while others participating and engaging in the same activity in other parts of town might not be caught as readily.

Second, along the same lines, the police have created the safety enhancement zone for a reason.  That means in the zone they are more likely to have zero tolerance for conduct that, in other parts of town, they might be inclined to let off with a warning.  With the double fines, the city has an incentive to enforce laws much more rigorously in the safety enhancement zone than outside of it.

In short, we cannot tell from the data that there was more lawbreaking inside than outside.  We only know that, because of deployment and police strategies, more people were caught – which shouldn’t surprise us.

But aside from Mr. Dunning’s methodologically faulty assumptions is a more subjective question – whether the presence of drinking and the high incidence of citations means it’s safer to keep his family away from the core of town.

It seems that, while the number of drinking citations has risen, which is not surprising given changes to enforcement, the number of serious incidents has been greatly reduced.  That would seem to suggest that the tougher enforcement has taken potentially problematic drinkers and removed them from the scene before they cause real problems.

Nevertheless, Mr. Dunning apparently believes that alcohol ought to be banned, but recognizes that given the amount of money involved it won’t be.

“You don’t need an advanced degree from UC Davis to realize that alcohol fueled the vast majority of those 116 citations last year, but getting downtown bars and restaurants to ban booze on Picnic Day is akin to asking See’s not to sell chocolate on Valentine’s Day … there’s just too much money involved to shut things down completely,” he writes.

“Unfortunately, as long as the party atmosphere remains downtown, Picnic Day will serve as a magnet for troublemakers near and far … ,” he continues.  “Which is why our family long ago decided to avoid downtown Davis altogether on Picnic Day and spend all of our time on campus, which tends to be almost exclusively alcohol-free and hence trouble-free … the choice is yours …”

While I’m hesitant to ban alcohol, it is worth noting that of the many businesses in the downtown, those majorities that do not serve alcohol have mostly chosen to close, rather than deal with drunken people in search of public restrooms.

The last time we attended, the temperature was warm, but water was difficult to come by and so too were public restrooms.  You have the strange dichotomy of a city attempting to crack down on public urination while at the same time failing to provide places for people – many of whom have been drinking – to urinate.

The bottom line is that the new measures have improved safety but have not eliminated the nuisance and hassle of the event, and that’s too bad.