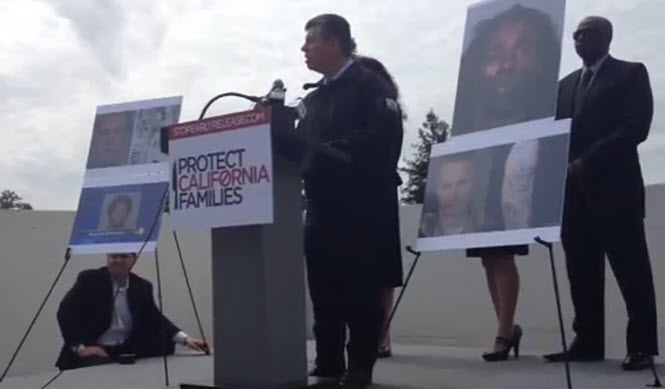 “I’m here because across the street, in that beautiful building owned by the people of California we have folks who don’t want to fix early release, and we’re in a parking structure where a lot of people hesitate to walk in because of early release,” former Lt. Governor and Former State Senator Abel Maldonado told reporters in Sacramento on Wednesday as he launched both his campaign and the campaign to repeal AB 109.

He told reporters on Wednesday that he was planning to file a ballot initiation repealing realignment – an issue that some believe is a potential liability for Governor Jerry Brown.  However, most observers believe that neither Abel Maldonado nor any of the other announced Republican Candidates pose much of a threat to the governor, who has solid approval in a heavily Democratic state.

Mr. Maldonado was appointed Lt. Governor by then-Governor Arnold Schwarzenneger, but lost in his effort to win the position on his own and then recently lost his bid for a hotly-contested Congressional seat.

“I’m here to address an issue that threatens the lives of every Californian, an issue that is the most important issue in California in a generation,” Mr. Maldonado said. “It is an issue that affects the quality of life and the safety of every citizen of my home state of California.  Today will be the beginning and the end of early release.”

During questions from the media, Mr. Maldonado indicated that he was in the process of forming a political committee to gether signatures, but acknowledged that he does not have the financial backing for a statewide signature drive.

Additionally, he did not offer his own plan to address prison crowding or satisfy the Supreme Court’s mandate.  However, he said his plan would likely include the construction of new facilities.

That was the approach of Governor Brown’s predecessor, Arnold Schwarzenegger.  The legislature would approve about $4.1 billion in bonds for new prisons, and Governor Brown, upon arrival in office and amid a budget crisis, would cancel those plans.

Mr. Maldonado, in an interview with the Los Angeles Times, told the paper, that this issue threatens the lives of Californians.

“This notion of families being afraid to go out on the street, being afraid of parking garages, families who are just afraid,” he said.  “The governor uses a fancy word called realignment.  At the end of the day, it’s early release…. A shell game is what it is.”

However, the evidence backing Mr. Maldonado’s claims are questionable, at best.

However, the LA Times reports, “Rogers’ alleged crime appeared to have little or no connection with realignment. California corrections officials said he was released from state prison in 2000 and finished parole in 2003, eight years before Brown’s policy change took effect.

“San Bernardino County corrections officials confirmed that Rogers, who has pleaded not guilty to murder in the woman’s slaying, had no other criminal record in San Bernardino until December 2012, when he was sentenced to, and served, 13 days in jail for failing to register his address as a transient sex offender. That time behind bars occurred one month after the slaying.”

These facts did not stop Mr. Maldonado’s adviser from telling the Times that Mr. Rogers’ case was touted because “he is a prime example” of the public safety threat created by prison realignment.

“It’s people like him who are being released,” said the advisor, Jeffrey Corless.

The paper stated, “He could not specify, however, what about Rogers would put him in that category.”

The crime rate and the impact of AB 109 is going to be difficult to assess.

Yesterday, the Vanguard noted in the Grand Jury report that, while there has been a lengthy period of decline of crimes, this trend may be changing.  Writes the Grand Jury: “Yolo County cities have reported a general decline in crimes over the same period.  However, this may be changing. Woodland reported a 28 percent increase in major crimes in 2012 compared to 2011; West Sacramento reported an increase of 8 percent. Only Davis, among Yolo County’s three largest cities, showed no increase at all in 2012 – after a drop of 37 percent since 2008.”

However, it is a one year trend.

Crime rates across the state have both increased in some localities and decreased in others.

In addition to realignment, one big factor may be that the economic downturn and series of bankruptcies and budget cuts have forced many communities to lay off police officers.

At the same time, the impact of the economic downturn may have a delayed effect on the crime rate, particularly as unemployment rates remain high.

Furthermore, the individuals released through AB 109 would have been released at some point, anyway.  These are individuals, many of whom were charged with non-dangerous, non-sex offenses.  The release of a large number of inmates at the same time may have had a temporary impact on the crime rate, however.

The key question is not year one of the crime data.  The first several years are necessary to see if this has been a trend upward in crime after decades of decline, or a temporary blip caused by the confluence of several factors.