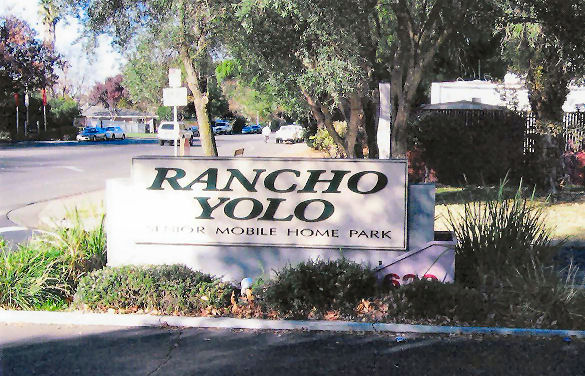 Staff is recommending the city council deny the request of Rancho Yolo to create a special water rate class, following discussions during and after the election in which leadership of the mobile home park proposed to have their water rates increase by the same percentages as single-family residential rates.

The controversy began publicly in February, when Rancho Yolo President Jerry Hallee wrote, upon seeing the city’s proposed water rates, “We were shocked, then angry, because the consequence of applying the MFR to Rancho Yolo makes the average Rancho Yolo household – senior, fixed-income, single-resident home – pay hugely more than the SFR household.”

The reason for that differential is that Rancho Yolo has far more in common with a multi-family residence because they are master-metered the same way that Multi-Family Residences are metered.  The system is plumbed privately, with connections to city water on East Eighth Street and Pole Line Road.  It is plumbed the same way as an apartment complex.

As staff writes, “In practice, mobile home parks are typically classified along with other multi-family residential projects because of their similarity in occupied space, onsite distribution systems and because the units do not include individual water meters.”

On the other hand, a typical single-family residence has an individual water meter and the water system delivering water to the residence is owned by the city.

City staff suggests, as the Vanguard did back in February and March, “In order for Rancho Yolo to be considered single family residential, the City could require that Rancho Yolo install water meters at every coach site (and possibly irrigation meters). Not only is the initial capital improvement component cost prohibitive, but the total of the fixed charge portion of the rate for the 262 individual meters would greatly exceed the cost of the two 3-inch meters.”

The Vanguard noted at the time, that the residents were advantaged by falling under the multi-family status.

In his letter, Mr. Hallee acknowledges this, “While it is true that Rancho Yolo has paid less overall for water when factoring in the meter/fixed charges, this arrangement was made many years ago when meters were first installed in Davis. And there are good reasons for Rancho Yolo’s lower water charges.”

Nevertheless, the city took the residents’ concerns very seriously.  In a letter dated March 15, Rancho Yolo requested “that the City create a mobile home park customer class that begins with the existing multi-family rate and increases by the same percentage as the ‘average single family’ home rate  increases for the first two years.”

As city staff notes in the current staff report, “Rancho Yolo believes that their requested rates are fair and proportional and differentiates between other multi-family users, such as apartments, and Rancho Yolo residents. Rancho Yolo further states that apartment owners may choose not to pass-on the full water rate increases to avoid rising vacancy levels, but the Rancho Yolo owner/manager has indicated he will pass-on all the increases because Rancho Yolo operates at full occupancy.”

The city referred the matter to Bartle Wells – at city cost – to determine the feasibility of the Rancho Yolo proposal.

In a memo dated May 23, 2013, Bartle Wells noted that they re-ran the water rate model with mobile home parks as a separate customer class.

They write, “If all the mobile home parks were placed in a separate customer class, the combined annual water cost increase to mobile homes would be $23,221.64.”  They conclude that, by separating mobile homes from the multi-family class, it would actually “result in a significant (about 19%) increase in annual costs to mobile home customers.”

Bartle Wells argued that the water rates that were ultimately approved by the city council “are based on a careful cost of service analysis prepared by BWA with the review and input of the Water Advisory Committee. Under Proposition 218 (Article 13D of the California Constitution), the City’s rates must be proportional, based on a cost of service analysis and one customer class cannot subsidize another.”

They argue here, “The rates proposed by Rancho Yolo are not based on a cost of service analysis and therefore would not comply with the requirements of Prop 218.”

“Staff concurs with the BWA conclusions,” the staff report says. “The alternative water rate structure proposed by Rancho Yolo to increase the mobile home park rates by the same percentages as single-family residential does not conform to the cost of service analysis for these varying types of customers.”

They add, “Specifically, Rancho Yolo’s proposed rate design does not conform with the City’s use of the Commodity-Demand method of rate design in which costs are proportionately allocated to each customer class based on their peak demand.”

This matter became a major controversy relatively late in the election as Davis Enterprise columnist Bob Dunning used the matter to attack the city, the council and the water project.

Wrote Mr. Dunning, “What’s alarming is that none of the council members who voted 5-0 to impose these rates on Rancho Yolo could explain the basis of the increase or why they voted for something they find so alarming in the first place …”

A week later, in noting that the “lack of answers” was “startling,” Mr. Dunning wrote, “the thing that struck me most about last week’s troubling story concerning the water rates the good folks in the Rancho Yolo Senior Community will be paying compared to the rest of homeowners in town was how utterly incapable council members were of explaining the rates to those directly affected.”

But, as noted at the time, water rates and water law is quite complex, and the expectation that the councilmembers would be able to explain on the spot what experts had to study was not exactly reasonable.

It is one thing for the council to understand and approve the basic structure of  water rates and how the components of those rates are derived.  It is another for them to – on the spot, without the consultation of the city’s experts –  understand the particulars, complex and site-specific, about how it worked at an individual site like Rancho Yolo.

In fact, Mr. Dunning, as we cited in a series in late March following the election, well before he wrote the initial Rancho Yolo column on February 21 and the follow up on February 26, had lengthy email exchanges with Brett Lee and Mayor Joe Krovoza, that showed they understood the basics of the proposed water rates and were able to articulate that understanding in some depth and detail.