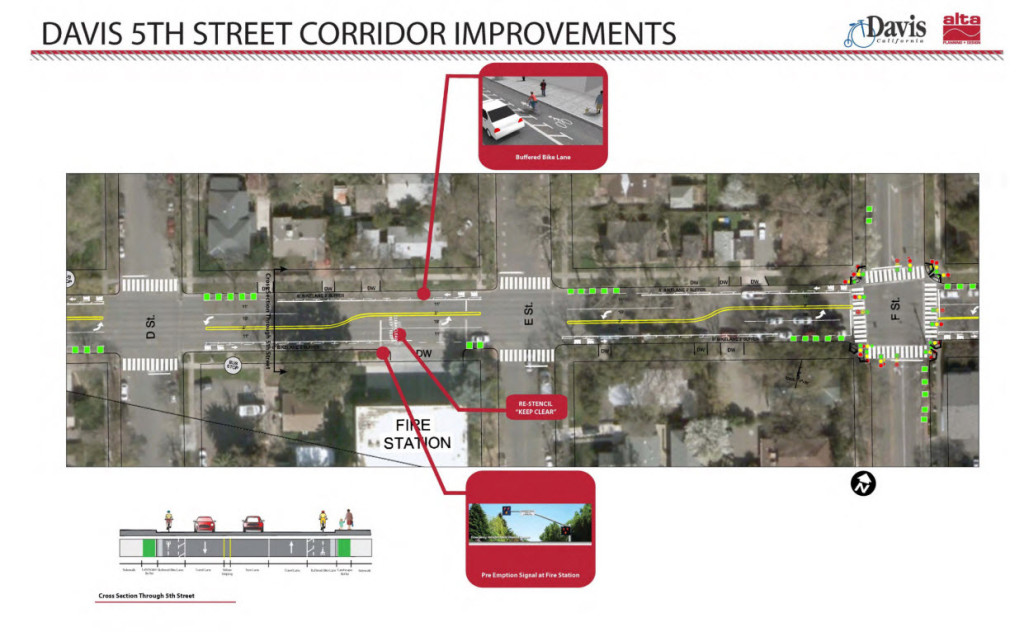 Construction Project Improves Safety for All Road-Users – In 2009, the City of Davis endorsed a travel-lane reduction on Fifth Street between B and L Streets to improve connectivity, safety and the ease of travel along the corridor.

The city announced on Thursday, that the “final construction phase of the Fifth Street Improvements Project will begin mid-July. The Fifth Street corridor between A and L Streets provides a critical connection to the downtown area and UC Davis; however, the corridor has historically lacked bicycle and pedestrian facilities and an efficient roadway design.”

The city stated, “The completion of the Fifth Street improvements project will result in a safer, more attractive and efficient street for all road-users. Planned enhancements include bicycle and pedestrian facilities to engender safe, easy, and convenient access to and from the downtown area. Features include marked crosswalks, dedicated bike lanes, pedestrian-activated flashing beacons, vehicle left turn lanes, improved traffic signals and timing, and streetlights throughout the corridor.”

“The lane reduction from four lanes to two lanes will not exacerbate traffic congestion through the addition of dedicated left turn lanes, while the improved traffic signals and timing will create shorter wait times for all road users,” the city added.

“The City of Davis thanks the community for their continued patience throughout the multiple construction phases of this project. The City will work proactively to minimize construction impacts for local residents and businesses and we invite you to contact us with any questions or concerns at fifth@cityofdavis.org. Residents may also visit traffic.cityofdavis.org for more information,” the city concluded.

The city, after years of discussion, debate, some would say delay and obstruction, has finally commenced the Fifth Street Corridor project between A and L Streets.  Construction began back on October 7 at A Street and will work toward L St.

“This is the largest of the City of Davis’ upcoming roadwork projects,” the city said in a press release last fall. “Some lane and sidewalk closures are expected in the next seven weeks, but full street closures are not anticipated.”

The project reduces the number of motor vehicle travel lanes from four to two lanes between B and L streets, to accommodate new bike and center turn lanes, the release continued.

The project also improves and adds access ramps at intersection corners, provides additional striped crosswalks, streetlights and pedestrian activated signals (at C and J intersections). It will upgrade traffic signals at A, B and L, and will include new signals at the F and G intersections to accommodate new lane configurations. In addition, an emergency traffic signal will be added at E Street, providing access to the Fire Station.

The contractor, Vanguard Construction Services of Livermore, began cutting curbs to complete ADA ramp installation, and will place conduits and foundations for street lighting. This phase was completed just before Thanksgiving.

Traffic signal work was done in January (where the signals are up but not operational at this time), followed by final striping.

Funding for this project is mostly from grants from the Sacramento Area Council of Governments, Highway Safety Improvement Program and Community Development block grants, with some local funds.

The redesign seeks to improve safety through the fifth street corridor, both by adding complete street road features such as bicycle lanes, medians, turn pockets and safer pedestrian crossings, as well as improving traffic flow through a reduction in lanes from four to two, which will slow down traffic but also allow it to flow more smoothly.

Currently, there are safety concerns with the speed, the difficulty of left turns both on and off the road, and the lack of safe pedestrian crossing opportunities and bike lanes.

“The Initial Study analyzed the project and determined that potential environmental impacts were less than significant,” according to a 2011 staff report.

“Potential impacts to emergency response plans and traffic during the project construction will be mitigated through a Construction Traffic Control Plan,” the report finds.

One of the concerns is the impact of construction on the fire station located in the heart of the project area.  According to city staff, “The plan will ensure emergency access through the corridor during the construction. A further Mitigation Measure requires the project design to include improvements for fire engine access after completion of the project.”

The Initial Study concluded that “impacts to the roadway system resulting from changed level or service or hazards would be less than significant.”

However, staff added, “Although there are no traffic impacts under CEQA, staff is very aware of neighborhood concerns about ‘cut-through’ traffic and its impacts on local streets. Staff is also concerned that delays along the corridor would result in drivers making inappropriately risky moves, which would increase the risk of collisions with other vehicles, bicyclists, and pedestrians.”

First, “After construction, the City shall monitor trips and speeds in adjacent neighborhoods and parallel streets, along with travel times along the corridor. If cut-through traffic increases to unacceptable levels as a result of the project, the City shall develop and implement a neighborhood traffic plan to reduce speeds and trips in the residential neighborhoods.”

After a series of compromises and mitigation measures, the council finally gave the project the green light earlier this year and now the construction has finally commenced.