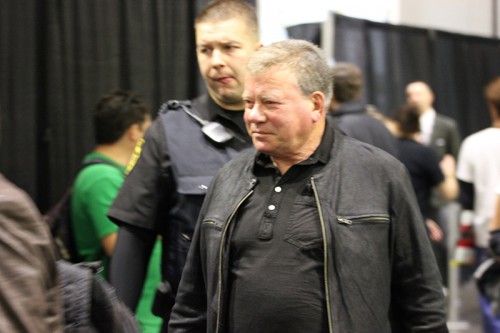 Sci-fi enthusiasts had their day in Sacramento, as crowds of over 25,000 people came to experience an array of stars at the Sacramento Comic Con – Wizard World edition. Among the big names were William Shatner of Star Trek, Evan Peters of American Horror Story, Norman Reedus and Michael Cudlitz from the Walking Dead, Caroll Spinney of Sesame Street, Superman actor Dean Cain, Billy Boyd from The Lord of the Rings, WWE wrestling star “Big Show”, Denis O’Hare of True Blood, Haley Atwell of Captain America, and more. The weekend-long event, which was hosted at the Downtown Convention Center, included countless photo and autograph ops, in addition to hundreds of memorabilia booths that featured all things big and small in the domain of fantasy, sci-fi, and pop culture.

William Shatner was the biggest name on everyone’s lips, who will be celebrating the 50-year anniversary of Star Trek in August. Yet, the excitement of Shatner’s presence was rivaled by a collective mourning over the loss of Star Trek actor Anton Yelchin, who died from a freak accident early Sunday morning. Despite the sad news, many were making the best of their Father’s Day, by taking dad out to the extravaganza. Local enthusiasts showed off their own artistic talents in homemade costumes. Apart from the classic Star Wars and Star Trek themes, Deadpool was the most popular motif – although Harry Potter, Dr. Who, Marvel and DC characters were in no short supply.

Greg Willis was among many event goers who dressed up. He said he was stopped over 100 times as people asked to take pictures with him dressed as R2-D2. “This is the highlight of my year. I don’t get to go to the gran daddy San Diego convention, but this is the next best thing. It’s just great to see everyone come out and enjoy the culture. I spent months making my getup – it cost around $2,000 but it was totally worth it! It makes a lot of people smile and the diehard Star Wars fans really get a kick out of it.”

The event was equipped with arcade-style video games, an art section where visitors could paint their own replicas, a tattoo parlor and an indoor airsoft shooting range.

Share:
Previous : Monday Morning Thoughts: The Devil Is Always in the Details
Next : Attorney Alleges Katehi Conflict in Disciplinary Action Against Employee

One thought on “William Shatner, Evan Peters Among Highlights of Sacramento Comic Con”