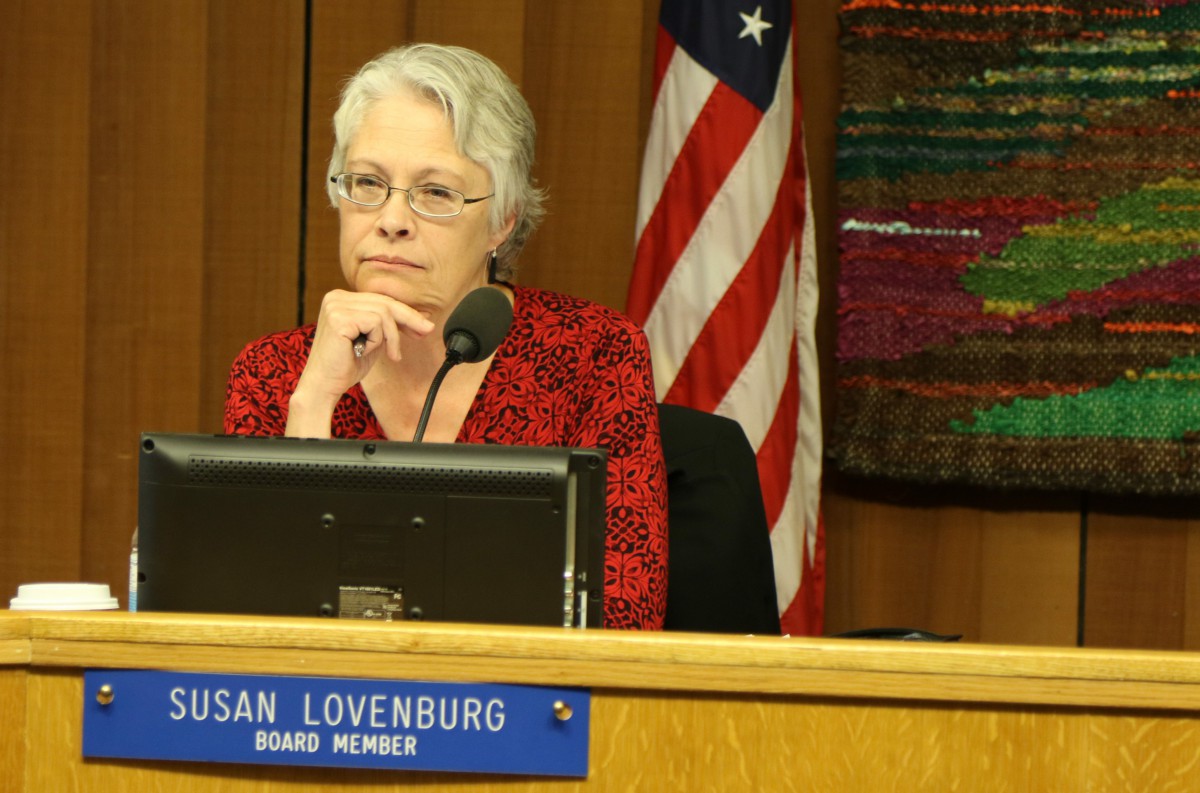 At the most recent Davis school board regular meeting, outgoing trustee Susan Lovenburg was acknowledged for her nine years of distinguished service.

One by one, local dignitaries, educators and community members stood at the podium inside the Davis Community Chambers and recognized the achievements of Lovenburg, from both the past and present.

Davis Teachers Association President Blair Howard began the show of appreciation, thanking Lovenburg, on behalf of the organization, “for her years of work on behalf of students, employees and the community of Davis.”

“Susan was involved in supporting schools in Davis long before she became a board member and her time on the board she’s always done the hard work of gathering information, seeking out various viewpoints and understanding the concerns of stakeholders before working publicly and behind the scenes for which she uses the best for the district as a whole,” Howard said.

Jim Herrington, President of the California State Employees Association Local Chapter 572, harkened back to when Lovenburg first was elected to the board.

Herrington explained that, at the time, he had been frustrated and ready to move on from his position with CSEA, but the partnership of Lovenburg and fellow trustee Sheila Allen as two by two reps made a noticeable difference.

Herrington said that, from there, he saw leadership, the development of an acumen for the budget, a genuine interest in all things district-related, and “discovered that she had a real passion for reforming things, fixing things (and) thought that if you got the right people together you could fix just about anything, you could get through just about anything.”

“And along the way I discovered that we were friends, which is very, very important to me. From me and my bargaining unit, lots of love, lots of respect.”

Former State Superintendent of Public Instruction Delaine Eastin acknowledged Lovenburg for her leadership qualities, including the courage to have care and concern for all children in the district.

“She recognizes that there might be a Down’s syndrome child who can nonetheless have a life of dignity and hope because he or she finds a place to go, as well as our AIM students who are really on a very high path,” Eastin said. “But she cares about every kid in between and that’s one of the things that I think is about courage.”

Other qualities of Lovenburg’s standing out to Eastin are her vision and planning ability.

“I always love the song, ‘Don’t Stop Thinking About Tomorrow,’ Eastin said. “But really if you’re really going to make things work you have to think down the road and I honestly believe that I’m proud that Susan’s really helped the district to be transparent but also to be visionary.”

Mayor Davis shared a tale from a few years back when the school board was experiencing fallout from internal issues.

“When things were challenging around the former board and there was a desire to understand how to deal with conflict differently in the school district, Susan reached out to several of us and said ‘what are the tools that we have in our community to do that?’” Davis said. “And I thought that that spoke very well of her desire to draw on the strengths already existing in the community to try to find resolutions to conflict that was brewing and I think it served this district well.”

He said two achievements, in particular, stand out among the rest.

“Leading the charge on the 1,000 Mentors for Youth Challenge just a year ago, which exceeded the goal of providing over a thousand mentors for Davis youth,” Davis said. “And for me personally something that I’m so proud that you’ve done for us is co-founded the Yolo County Chapter of the Brady Campaign and Gun Violence. Thank you.”

Yolo County Supervisor Don Saylor presented a proclamation signed by him and fellow Supervisor Jim Provenza, who both served on the school board.

“We acknowledge and recognize the hard work that you put in, all five of you and we know that you go home at night and wonder how you’re going to make things work for every student in the district,” Saylor said. “And Susan, you have three daughters of your own but I know that you consider every child in this community to be your child and your actions every day for the last nine years have reflected that.”

Saylor talked about the level of commitment shown time and again by Lovenburg, who he said is thorough and asks the same of others.

“Susan insists that you understand the details of every issue,” said Saylor. “If you attempt to (say) just ‘that’s enough I got it I got enough I think I can go on’ she’ll say ‘no you have to understand the rest of it.’”

He added: “And she knows that our community is insatiable when it comes to that kind of deep analysis and understanding. And so in her early days as a school board member I think it was another parcel tax measure she wanted to make sure that everybody understood exactly what went into the budget and she worked hard with community volunteers and school district staff and came up with District Dollars so that people could really get into the details of exactly what the budget meant and how it worked and how things all fit together.”

Jesse Ortiz, the Yolo County Superintendent of Schools, said that he sensed an underlying theme from the other speakers, which was the level of time commitment and dedication Lovenburg gave to the kids of Davis.

Sheila Allen, who eschewed filling out the requisite blue card, thanked Lovenburg for being a team player.

Allen noted her “great calm and thoughtful approaches to the very difficult times that were in the beginning.”

She also gave an example of Lovenburg’s attention to detail.

“Susan and I were on the Board Policy Sub-Committee but it was never publically posted this but we call it the arduous and perpetual board policy sub-committee. That was the actual name for it and it’s when we moved from binders of things that were stapled and stuffed together from, I think it was 1987 was the banner year for making policies, and Susan and I read every single word of the policies that came to us from CSBA to make sure that we didn’t just say, okay alright alright. We wanted to make sure that they fit Davis.”

Another former fellow trustee, Richard Harris, gave a personal anecdote about getting to know her when the two were running for the board in 2007.

“Sat down with her over coffee, learned she was a librarian, listened to her discuss issues that I had no idea were issues,” Harris said. “I didn’t even know someone had thought they might be an issue. I went home and I started thinking about it. I said, man I am in trouble. So I did the one thing that you could only do in a situation like that, I just made sure that if I got elected to the board all I was supposed to do was before every board meeting find some little slice of time where I could get a hold of her notes and her book and read through all of her homework.”

Trustee Tom Adams, the Deputy Superintendent of the Instruction and Learning Support Branch, represented State Superintendent of Public Instruction Tom Torlakson with applause and appreciation for Lovenburg’s service to Davis, along with her commitment to earning the respect and admiration of colleagues.

Adams, however, had some accolades of his own for Lovenburg.

“One way of defining courage is grace under pressure and I think that really is someone that has exhibited that more than anyone else on this board, it has been you,” Adams said. “You’ve been open to all points of view you’ve welcomed participation of all groups. There was not a constituent at our Davis site that you would not meet with, even quizzical ones, maybe difficult ones from South Davis.”

Adams also noted his colleague’s passion for transparency and ensuring the building of the District Dollars website, which he said was a major influence in the recent passage of Measure H.

Of the four trustees, perhaps it is Vice-President Barbara Archer who can relate best to Lovenburg.

“Susan and I met as parent volunteers about a decade ago at Willits Elementary,” Archer said. “At Willits, Susan was what I refer to as a super parent. She was one of those parents who was at every event, a parent who put in literally hundreds of hours in personal time to make the school campus a better place so it was no surprise to me at least when she decided to turn her boundless energy and her dedication to our schools into a run for school board. In fact, I took over the Willits school newsletter so she could do that.”

Archer said that, while Lovenburg did the newsletter for nine years, she only lasted five.

“Her board service in my opinion has been remarkable, in her preparedness, her thorough research on issues and her quest to ensure that everyone in our community has a stake in Davis schools,” said Archer.

Archer noted that, as a trustee, Lovenburg was a constant presence, attending what seemed like practically every district event on the docket

She added: “All those examples of her work, they illustrate how she encouraged outreach to foster healthy solid partnerships between our school district and our families. You can’t just expect it if you don’t connect with people.”