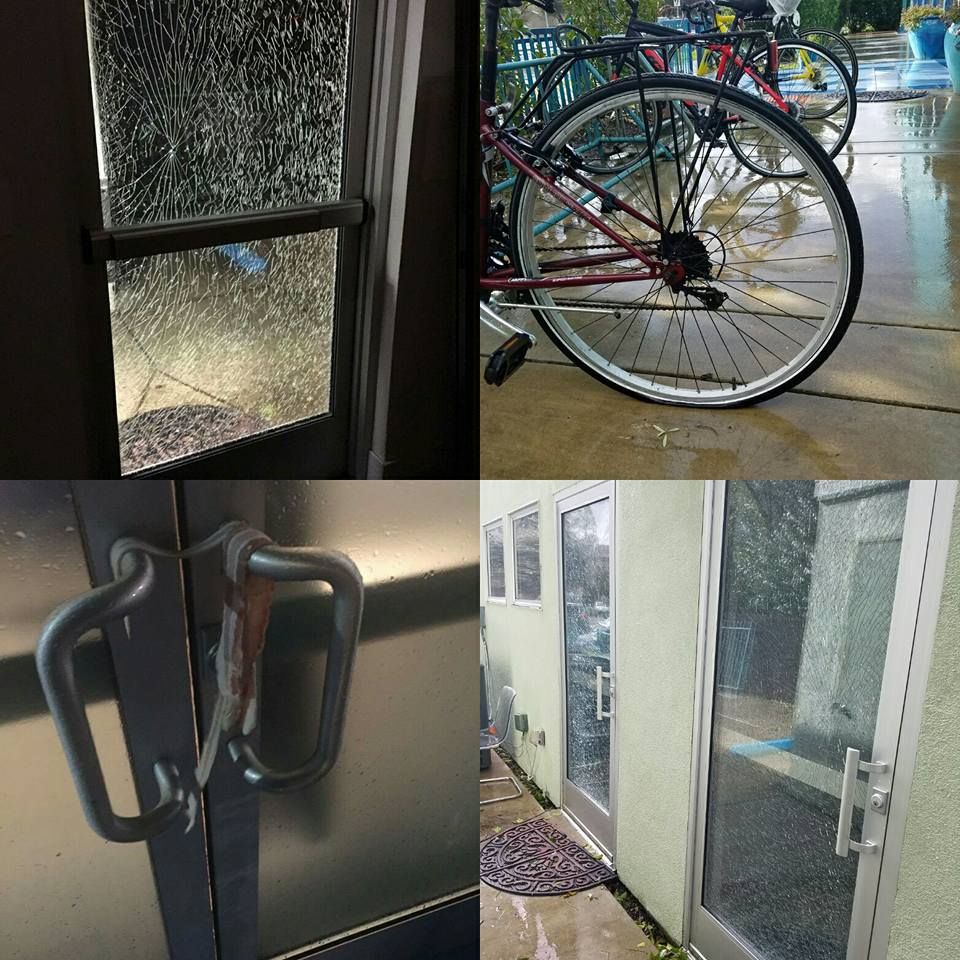 In the early morning hours of Sunday as a storm was brewing in Davis, another storm was brewing at the Davis Islamic Center as a female perpetrator broke windows, placed uncooked bacon on an exterior door handle, and destroyed two bikes parked on the property.

Davis Police Lt. Tom Waltz told the Vanguard on Sunday that Davis Police are treating the reported vandalism as a hate crime.  While there was no message left by the suspect, the use of bacon, prohibited under Islamic Law, was a clear indicator of intent.

Based on surveillance video from the scene, it appears the crime occurred between 3:45 a.m and 4:00 a.m. the morning of January 22.

Officers found that an unidentified suspect had used an unknown type of device to shatter six window panes on the building’s exterior. The same suspect also placed strips of uncooked bacon on an exterior door handle and destroyed two bikes parked on the property.

Tom Waltz said that the video gave a pretty good description of the suspect, that he described as a white female adult, between 25-35 years old, 5’4″-5’8″ tall and approximately 160-180 lbs.

Islamic civil rights group CAIR (Council on American-Islamic Relations), sent out a release on Sunday urging the FBI to probe the vandalism.  The Muslim civil rights group offers $1,000 reward for information leading to conviction of the perpetrator.

CAIR-SV (the Sacramento Valley chapter) said a glass door was smashed early Sunday  morning at the Islamic Center of Davis in Davis, Calif., and what appeared to be bacon was left on a door handle of the house of worship. Surveillance video shows someone who appears to be female placing the bacon on the door handle.

The release noted, “Muslims are prohibited from consuming pork products and bigots often use pigs or pork to offend Muslim sensibilities.”

“We ask state law enforcement authorities and the FBI to investigate the apparent bias motive for this vandalism and to bring the perpetrator to justice,” said CAIR-SV Executive Director Basim Elkarra. “The swift apprehension and punishment of those responsible for this act of religious intimidation will send the message that the growing Islamophobia we are witnessing in our nation will not be tolerated or ignored.”

CAIR’s national headquarters in Washington, D.C., has noted an unprecedented spike in hate incidents targeting Muslims and other minority groups since the November 8 election.

ASCUD issued a terse statement, “Just over a week since a student organization invited an Islamophobic, transphobic speaker on campus, a hate crime has occurred targeting our Muslim community.

“It is with the deepest sympathy and regret that we express our solidarity with our Muslim students here on campus and in the wider Davis community,” the statement continued.  “This is what happens when we invite hate into our community and allow it to proliferate under the guise of ‘free speech.’ As a student government, it is our collective duty to protect our students.”

The College Republicans quickly put out a statement condemning the actions of “the criminals who vandalized the Islamic Center, breaking windows and leaving bacon on site.  We do not condone violence and/or hate crimes.

“The Islamic Center of Davis is a peaceful organization, and one of the few proponents of open discussion and education about their culture and religion.  As fellow victims of violence and intolerance, we stand with the Islamic Center as they search for the perpetrators of this crime, and hope that they find the criminals so that we all may live in a peaceful atmosphere.”

They responded to the ASUCD statement: “The ASUCD Senate has made a statement today implying that our Milo event caused the vandalism at the Islamic Center of Davis. Our right to free speech was infringed when protesters became violent enough to force the UC Davis administration to stop our event. ASUCD, the body representing our students, has claimed that ‘[a]s a student government, it is our collective duty to protect our students.'”

They continued, “As a student government, it is your duty to protect the rights of all students, not just those with whom you agree. You should have publicly defended our right to free speech. Instead, you have wrongly cast blame on an organization interested in diversity of thought, alienating a minority group of students on campus. You are part of the reason why conservatives feel that they cannot openly express their beliefs.”

“’Condemning'” this act simply does not communicate our true feelings,” Mayor Robb Davis said in a comment on Facebook.

He added, “First, this is the act of a coward. We should all feel pity for a person so emotionally stunted that she stoops to this act. Second, our Muslim brothers and sisters are part of the fabric of our community and we will never abandon them–ever. And third, let us all take the time to reaffirm, in any way we can, our commitment to inclusion and support of all members of our community.”

Back in December after a hate letter was sent to the Islamic Center, Yolo County DA Jeff Reisig said that leaders “have come together to declare our commitment to standing up and fighting against hate crimes and hate incidents.

“We stand with our diverse communities at a time when hate crimes across the nation and the region are on the rise,” he said.  “As the District Attorney I simply want the community to know that we will vigorously investigate and prosecute all crimes that we can prove in this regard.”

Davis Police Chief Darren Pytel said, “Words of hatred and terror such as this serve no rational or legitimate purpose.”  He said that Davis is a community that celebrates its diversity, “we’re not just tolerant, we embrace each other for who we each are.”

The community members, he said, “are aligning to stand up against hate and those who spread hate.”  As a community, he said “we are coming together to protect each other against hateful words, messages, threats and violence.  Hate is not a value that is welcome in Davis.”

Share:
Tags:ASUCDCAIRDarren PytelDavis Policehate crimeIslamic CenterJeff ReisigRobb Davis
Previous : Monday Morning Thoughts: The Dawn of a New Era
Next : Future of Police Reform Will Be Forged at the City and County Level