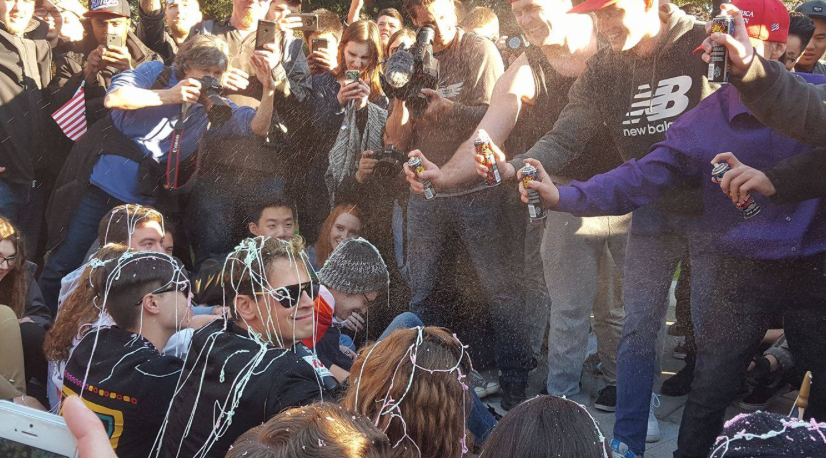 On January 13, 2017 on a cold winter night on the UC Davis campus I saw some 250 people come together, which included students, faculty, families with children and other community members came out to protest Milo Yiannopoulos and Martin Shkreli talk.

They were exercising their right to assemble and to protest as guaranteed by the First Amendment.

The protesters were successful as they blocked access to the venue forcing the Davis College Republicans to cancel the event. Contrary to Milo’s posts and following comments “violence from left-wing protesters” did not force the cancellation of the event. No “hammers” were used by protesters to “smash windows” on campus.

Milo and his cabal did march through the campus the following day to protest the cancellation of the event.

During the protest his cabal recreated the “Pepper Spray University,” when on November 18, 2011, during an Occupy movement demonstration, officer Lt. John Pike, a university police officer, pepper sprayed a group of demonstrators as they were peacefully seated on a paved path on the campus quad protesting tuition hikes, violent assaults by police on other UC campuses, and as they defended their right to education.

Milo was smiling as he was sitting down being sprayed with silly string.

Milo and his cabal were trivializing the targeting of students protesters by police officers in riot gear with chemical weapons.

This was not what the protesters did to Milo the night before.

On November 18, 2011 the UC Davis administration felt the only way to “secure” the campus was by displaying and using military acts of power against political protest and intellectual dissent.

On January 13, 2017 students and community members used signs and sang chants to display their opposition to what Milo and Martin stand for.

What is so hurtful and harmful of what Milo and his cabal have done is that they are laughing at the abuses of police power and police violence that target disproportionately radical and progressive student activism.  They are also normalizing the militarization of police which have intensified the surveillance and criminalization of communities of color.