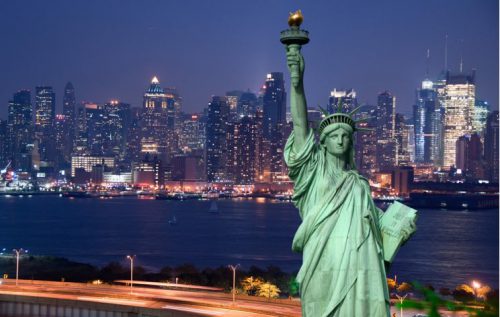 “Nothing changes on New Year’s Day” – U2

Truth be told, I’m not usually very big on New Year’s Day.  Aside from being kind of an artificial holiday – it is a reminder that another year has passed and that we are a year older.  Nevertheless, for the first time in years, I found myself staying up until midnight to see the passage of time.

For many, 2016 was just not a good year.  It has been almost amusing to see people’s horror grow in December with the passing of several celebrities.  While I’m a bit nostalgic for the loss of some of my 1980s icons from growing up – I largely rejected the pop culture they were a part of.

The loss of George Michael, like Prince this year and Michael Jackson and Whitney Houston from a few years ago, provides closure to an empty time of vacuous pop music and raw consumerism.  As Paul Simon once lamented, “It’s every generation throws a hero up the pop charts.”

But 2016 was much more sinister than the loss of an artist who once implored us all to “Wake Me Up Before You Go-Go.”  And, in fact, in a way 2016 is the nightmare that keeps on giving.

The truth is we should have seen the Election 2016 coming from a mile away.  Throughout the election, still foolishly convinced he would not win, I feared the future of political discourse after all the rules were essentially thrown out.  Now that he has improbably won, I don’t know that this nation can really continue without a real reckoning.

I never thought I would see the day where the American people elected someone to the office of the presidency who was, quite simply, publicly mean.  This was a man who belittled his opponents, made personal swipes about his adversaries, mocked people with disabilities, and worse.

But all of this was essentially predictable.  In the 1990s, people were convinced that the Clintons were behind of the death of Vince Foster.  The Whitewater scandal lead to the impeachment, but not removal, of President Clinton when it was discovered he lied under oath about having some sort of sexual relationship with a White House intern.

The right, as it turns out, was not alone in fanciful conspiracy theories.  I know lefty-activists who to this day are convinced that 9/11 was an inside job.  They believe that flying a plane into a building was insufficient to bring that building down and that, therefore, George W. Bush manufactured 9/11 to bring us the justification for the war on terror and ultimately the invasion of Iraq.

Many believe that, while the Bush White House misread intelligence reports and suffered from confirmation bias on weapons of mass destruction, the President’s culpability went further – that he intentionally lied about the presence of these weapons again to finish the job he saw his father, President George H.W. Bush, not finishing.

The Obama years pushed us further on the path to a polarized country.  There were many who were convinced that President Obama was a non-native born illegitimate president, who lied about being Christian and that, in fact, he was Muslim.

This rejection and polarization led to the rise of Donald Trump, the most improbable president in the history of this nation.

The truth is that there are a lot of things that deeply concern me about Donald Trump.  His longtime views on the Central Park 5 do not give me comfort.  His claims during the campaign about building a wall, mass deportations, and Muslim exclusion are concerning.

He has at least given aid and comfort to white supremacy and forces of tyranny like Russian leader Putin.  His cabinet picks are not reassuring, given their lack of experience and their extremist views.

At the top of a very long list, though, is his casual disregard for facts.

There were the comments last month by Scottie Nell Hughes, a Trump surrogate, who basically stated facts no longer exist.

He said, “Everybody has a way of interpreting them to be the truth, or not truth. There’s no such thing, unfortunately, anymore as facts. And so Mr. Trump’s tweet, amongst a certain crowd—a large part of the population—are truth. When he says that millions of people illegally voted, he has some—amongst him and his supporters, and people believe they have facts to back that up. Those that do not like Mr. Trump, they say that those are lies and that there are no facts to back it up.”

In George Orwell’s 1984, the hero was broken when he was forced to believe that 2+2=5.  But the more sinister problem was that the ruling party could simply alter history at their whim – “Oceania was at war with Eurasia; therefore Oceania had always been at war with Eurasia.”  Even though Winston remembered there was a point in time when that was not true.

The truth is that facts haven’t mattered for a long time.  The left made the mistake of trying to factually disprove things like the birth conspiracy, whereas the reality is that those who believed it were never going to be convinced otherwise.

“The media is always taking him literally instead of seriously,” tech billionaire Peter Thiel said at a National Press Club event in Washington, D.C., prior to the election.  “I think a lot of voters for Trump take Trump seriously, not literally.”

Instead, Mr. Thiel said he thinks Trump voters correctly “sense that the U.S. is very badly off track.” And while Mr. Trump’s comments about women are “unacceptable,” he said, the country is “at such a crucial point that you have to overlook personal characteristics.”

I don’t know what January 20 brings, but I fear that we are witnessing the end of the great American Democratic Experiment.  And the downfall will be the ironic fact that, in a world of instant information and infinite fact-checking ability, the truth no longer matters.

We shall see, but I am no longer optimistic about the future of this nation.