The Davis City Council will receive tonight an update on the General Plan Housing Element Progress report for the year of 2016.  This is a check in with the council in order to ensure consistency with the city’s one percent growth resolution that caps growth to 260 base units, not including exempted affordable housing, ADUs (Accessory Dwelling Units) or units in mixed-use buildings

A total of 266 residential units were issued building permits in 2016, consisting of the following:

As you can see, 2016 is the first time in a decade that the city reached a numerical 260 units (including the deed restricted affordable units). 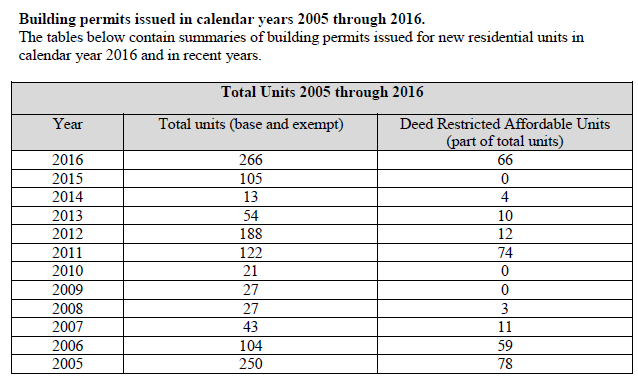 Staff believes that over the next five years, from 2017 to 2021, the city will issue roughly 1098 building permits for potential residential units. 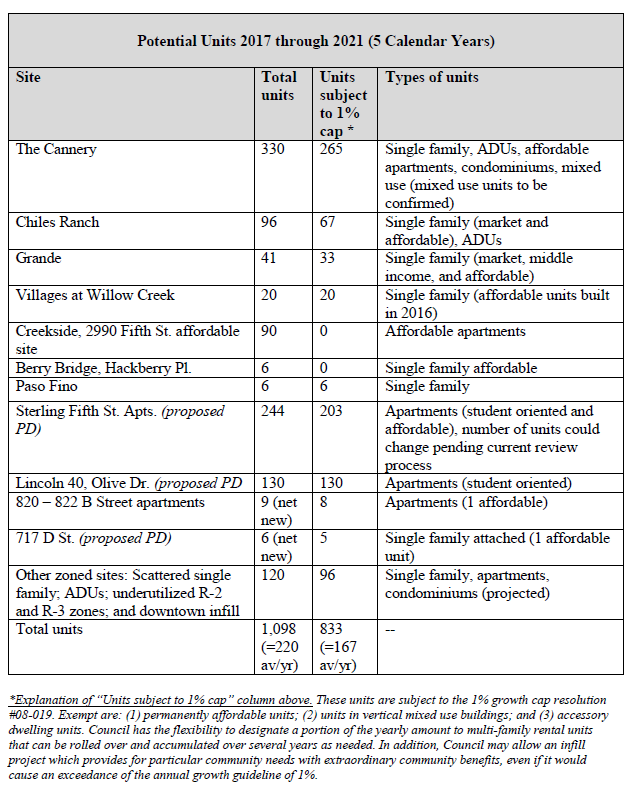 There are some potential additions to those – residential units in the proposed West Davis Active Adult community, and apartment projects such as Sterling and Lincoln40.

As noted in yesterday’s article, “the UC Davis Office of Student Housing conducted an annual Apartment Vacancy and Rental Rate Survey to collect data on vacancy and rental rates, as well as other characteristics, for rental units located within the Davis community (in City and on campus). The objective of the survey is to provide information that will help inform planning decisions on campus, and throughout the broader Davis community.”

The survey represents about 83 percent of total multi-family housing stock in Davis.  They surveyed 8105 units and found that the vacancy rate was 0.2 percent whereas the previous years it was 0.2 percent and 0.3 percent.  The average rent increased 5.8 percent to $1576.

In Spring of 2017, staff intends to schedule for City Council an overview of the RHNA (Regional Housing Needs Allocation) process for the next Housing Element.

In addition, on January 10, 2017, the City Council directed staff to proceed with Core Area policy/code updates and a General Plan update, in a partially-overlapping process with a total timeframe of approximately 3 to 3-1/2 years.

Share:
Tags:Affordable HousingGeneral PlanHousing Elementland use
Previous : What is Davis’ Missing Ingredient?
Next : Commentary: Community Outrage Made a Difference for GE