The Davis Chamber hosted a 10-person forum on Tuesday at the Vet’s Memorial with a number of business and government leaders on the 10-person panel.  There were a number of very serious complaints aired during this time, the most serious by talk radio host Jack Armstrong, who described a recent incident where his family, including his five- and seven-year-old kids, was eating dinner and was brutally accosted by a homeless individual.

Davis Police Chief Darren Pytel, responding to a question about panhandling, explained that “not all homeless are panhandlers, and not all panhandlers are homeless.”  He went onto explain that, as a result of a Supreme Court case, local jurisdictions are more limited in what they can do to prevent panhandling, as they found that it is protected speech.

“The speech used to panhandle in a non-aggressive way is protected speech,” he said.  “So essentially we can’t have regulations, ordinances, or laws that just prohibit someone from (asking for money).” 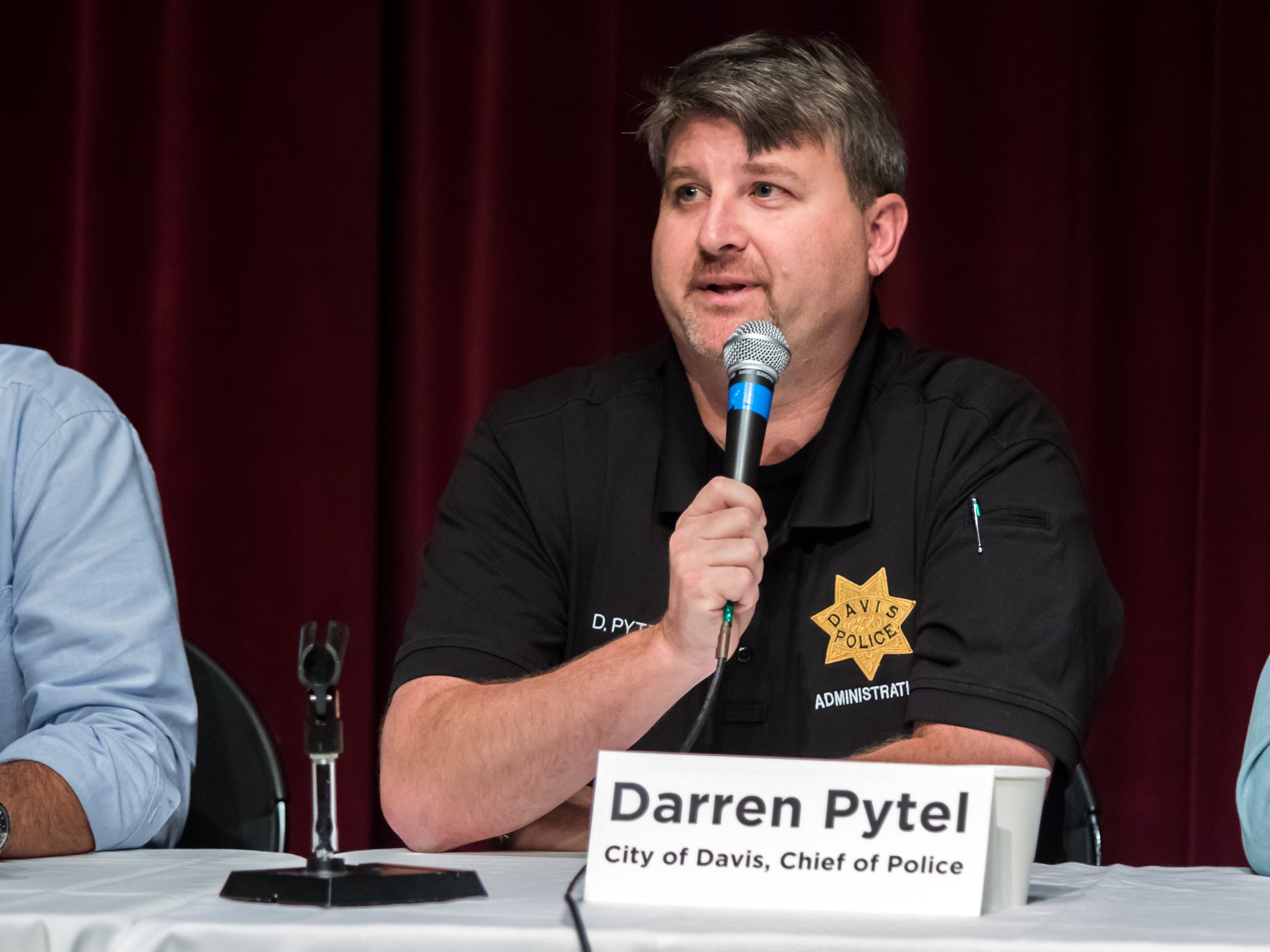 Therefore most panhandling ordinances that deal with panhandling or panhandling in certain locations are going to be invalid.  The chief did say there were some things we can do “unrelated to speech, dealing with conduct.  We can of course regulate types of conduct that can be dangerous.”

The two things that seem safe to regulate are preventing people from being in certain locations like near an ATM, or certain other places.

Tom Jobst from Froggy’s pointed out that if people are loitering in front of the bar, that is in violation of their liquor license.  So when people refuse to move away from the bar, they have simply called the police.  He said, “That’s what has worked for us.”

Chief Pytel agreed that “for bars under state law they can prevent anyone from loitering under state law.”  However, he did warn that the distance away from the bar was pretty limited in terms of their ability to move people.

Jack Armstrong, a long time radio host and resident of Davis, had a very serious incident that occurred at Dos Coyotes where he was eating with his wife and two kids.  “It’s hard to go anywhere with my kids in Davis right now because if we see anybody that looks like this gentleman looked, my kids start crying…” 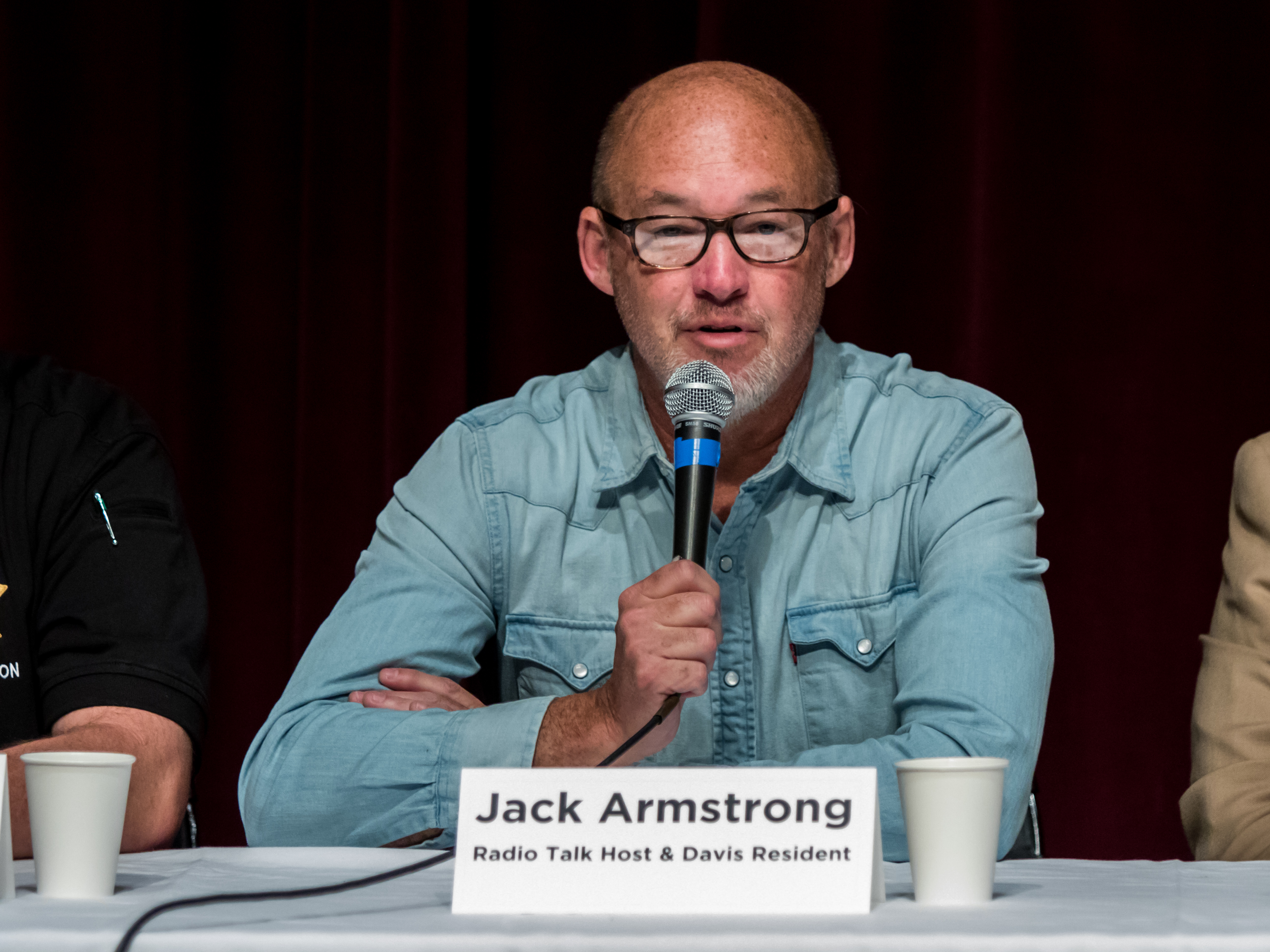 They were on the patio at Dos Coyotes eating dinner.  A guy came stumbling up to the patio, clearly intoxicated.  He walked right up to the table.  Mr. Armstrong said, “I can’t help you man, move along.”  At this point the guy went on a tirade.

His kids started crying, and he stood up thinking they were going to have a physical altercation.  “He took a couple of steps back and I was between him and the children who were just screaming ‘Daddy, make him stop.’”

He was trying to get his phone out to call the cops and at one point the guy reached into his pocket and said he was going to shoot him.  “I thought I’m going to get shot right here on the street.  I hadn’t calculated that in the process of standing up to this guy,” he said.  He quickly figured the guy was bluffing when he didn’t pull anything out.

“There was nobody coming out to help or anything,” he said.  When he got the police on the phone, the guy walked away and took off.

He said as he tells his friends this story, everyone they talk to realizes that they have been “slowly adjusting our lifestyles as places get sketchier and sketchier in town.”

They eventually caught this guy and found out that he has a record and is wanted elsewhere.  Mr. Armstrong said, “He is actually violent.” 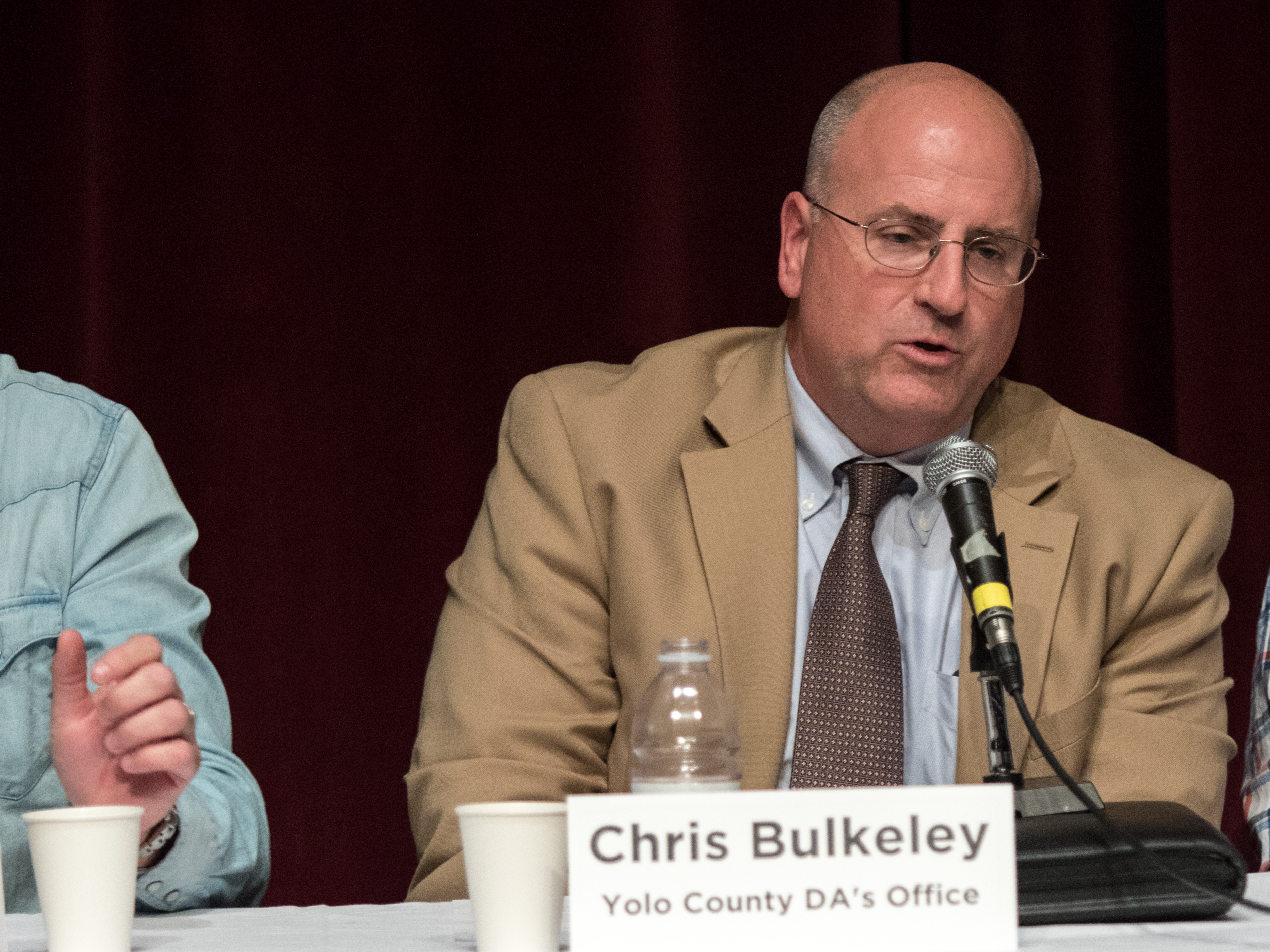 He said, “I want Davis to stop being a magnet” for these kinds of people.  He said, “This is the scariest thing that ever happened in my life.”

Darren Pytel said that they are starting to see a transition in the type of people they are dealing with.  He said that the homeless people come from a very wide cross section and, while some homeless in town never pose a problem, they are now starting to deal with more that are causing problems.

Part of the problem, he said, is, “The price of drugs has gone down considerably in the last five years.”  Combined with the fact that panhandling can bring in $80 to $160 a day, the amount of money flowing is just a lot of money and, as a result, there is “significant drug use in the population.”  The problem, he said, has “converted from beer to meth, heroin and of course marijuana.”

Those who aren’t doing panhandling are often involved in burglary, where homeless will break into cars and get rid of property quickly.

Bill Pride, the director of Davis Community Meals, while not discounting that over the years he has heard and seen stories of violent encounters, said that “as a general rule our programs are safe, people come eat and they leave peacefully.”

He also said that “I do not support panhandling.”  He said he believes that at any given time somewhere between 60 and 75 percent of the homeless population is drug addicted and that the core group of folks use panhandling to support their habits.  He has suggested, rather than giving people money, using the “giving meter” as a way to support the homeless without putting cash into their hands. 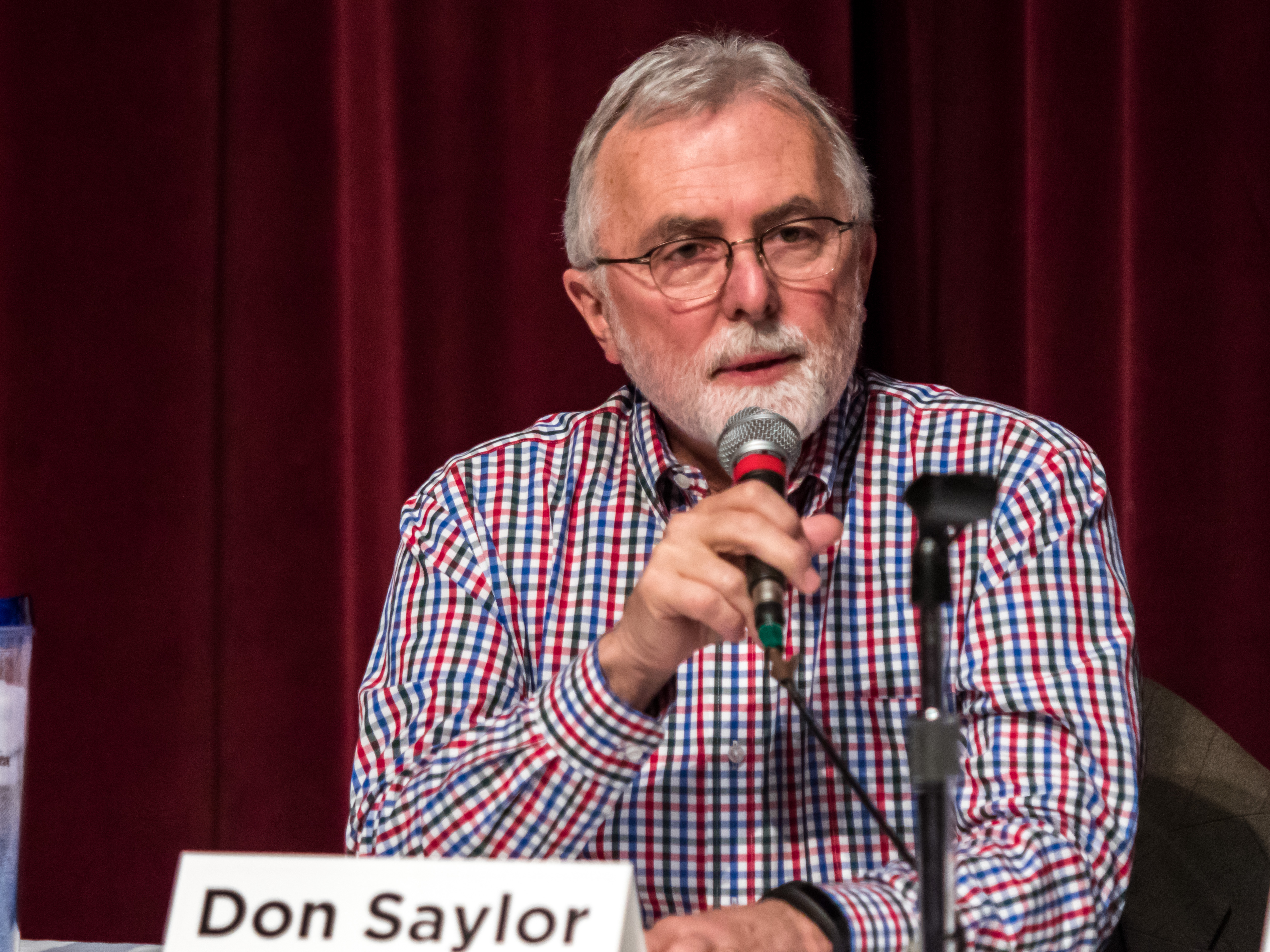 Deputy DA Chris Bulkeley said that one of the big problems is that a lot of people don’t want to get services.  And that getting people into treatment is one of the biggest challenges as, generally speaking, they cannot compel people to take medication unless they place them in a conservatorship – which is a long and difficult process.

Tracey Dickinson, Yolo County’s homeless program coordinator, said that they reach out to the unsheltered population “and what we find is that it often takes a very long time to build the relationship with that person so that they are willing to access services.  On average it would take like seven ‘touches’ so seven times of going out (and making contact) before they are even willing to engage in a conversation.”

She also pointed out, with someone living outside or homeless, “it’s very difficult to stabilize.”

A business owner who was an audience member and did not identify herself said, “I’m a downtown business owner, I have had a highly successful business for eight years, I want to be able to operate that business unbothered and unmolested by the homeless.”  She added that she wanted herself and her customers to be able to go from parking to her business “feeling safe and (not) having to step in garbage, squalor, filth – be threatened by pitbulls” and not having to step over people who have set up sleeping areas with stinking beds. 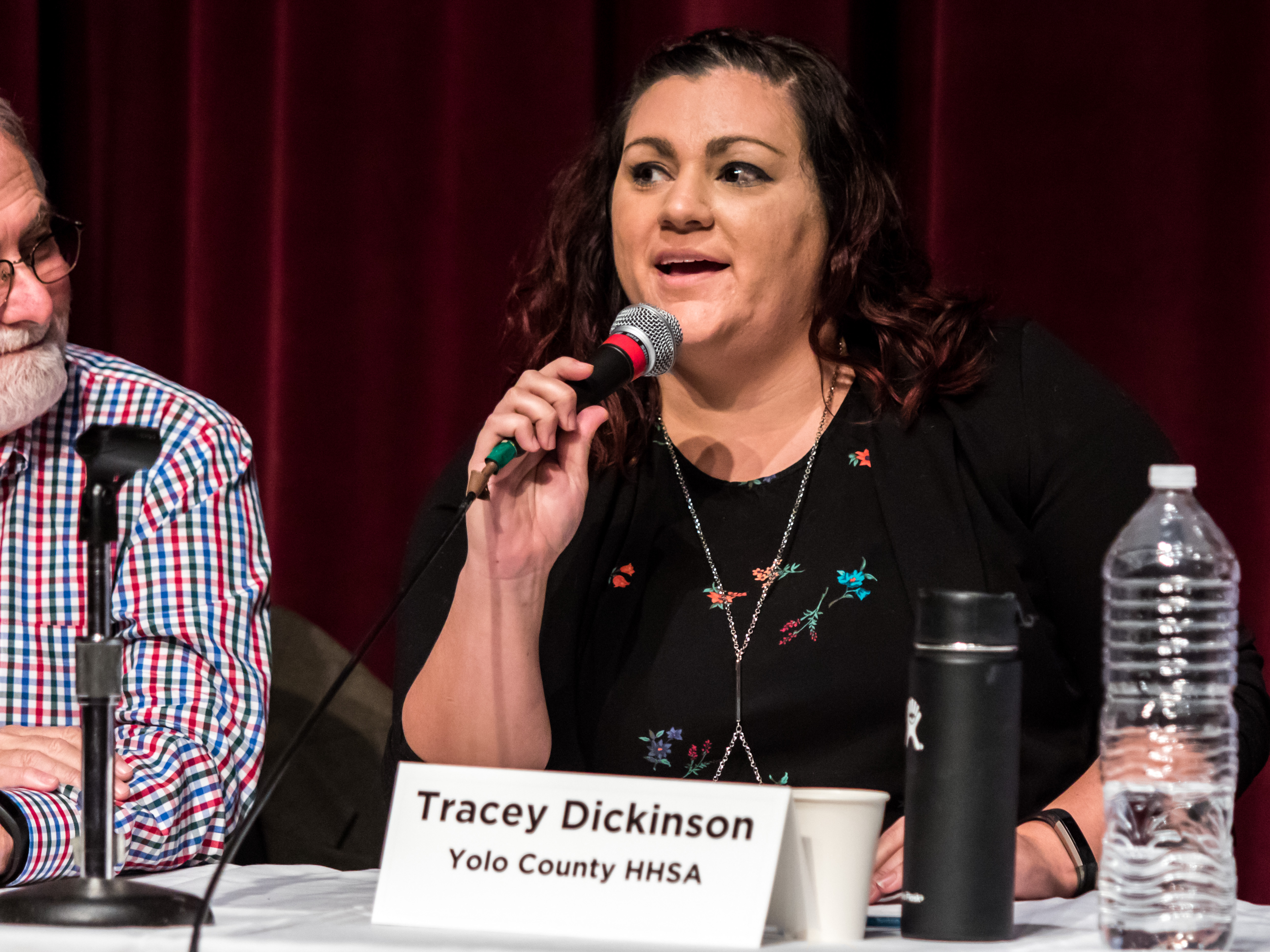 She also asked what offenses the police actually respond to.

Chief Pytel responded that “it is hard to give you very specific answers.”  He said he would have to listen to a call and determine whether it is something they can deal with.  They prioritize it.  He said that they will always respond to fighting or threats, people who are drunk or passed out, and those screaming.  He said patrols range from four during the day shift with a bicycle officer, to seven on the busiest night.

Jack Armstrong would ask if there is something we are doing to attract these people to the community.

Chief Pytel said that they are “seeing a change too.”  He said there were people who were being “extremely uncooperative.”  But he also added that it is “not something unique to Davis.”  He went to a regional conference and the most engaging discussion was on dealing with the homeless.  He came away “feeling good about Davis and the types of things we are doing.”  He concluded that this was not necessarily a Davis thing and what other communities are dealing with is far worse.

Mayor Pro Tem Brett Lee joined the discussion later because of council closed session labor negotiations.  He said that this issue very complex.  He said, “This idea of homelessness – it’s not a very good descriptor of what the issues are except in a very narrow sense. 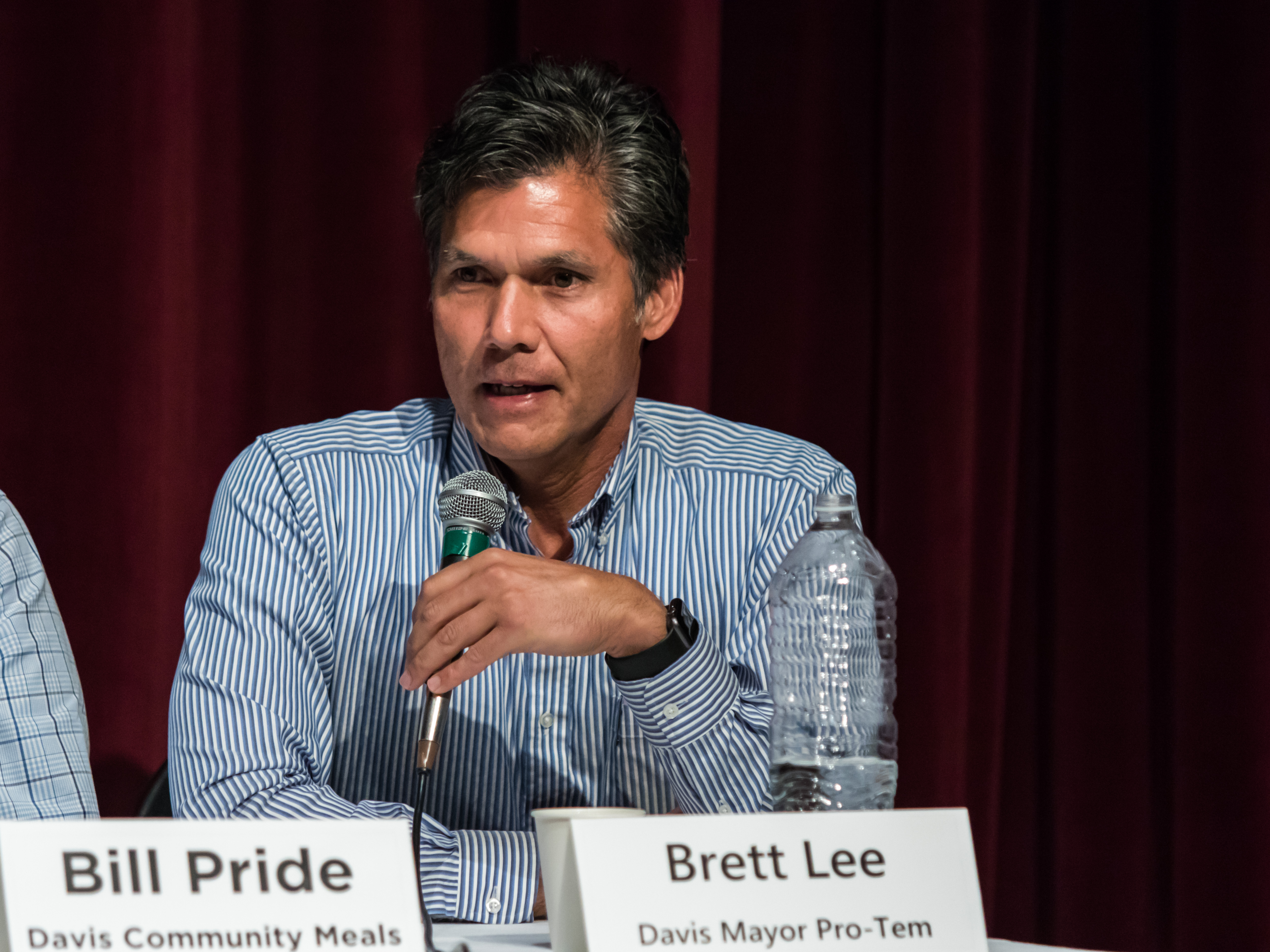 “It’s really about behavior and whether you have a roof over your head, whether you have a nice car in your driveway, if you come and are disruptive,” he said, noting that many of the problems in downtown on Friday morning are due to the behavior of drunk college students from the night before who are relatively well off.  “It’s really about behavior.”

He called homelessness “almost this third rail” when they talk about homelessness.  For instance, their discussion of restrictions on panhandling engendered a lot of pushback.  He said, “Immediately the discussion drifted into, you’re criminalizing homelessness.  What are you doing to support them?”

He said, “I think it’s totally reasonable to focus on people’s behavior.”  He added, “As a council person, I’m very aware of the issues… it’s very troubling that things take so long (to address).”

Jon Adler has worked with the homeless population for about 20 years, and is a former homeless person himself.  He said that we are attracting people here.  “The same reason that you chose to live here – it is safe, it is a nice town.  When I went to bed, I didn’t worry about someone kicking my head in.”

He said, “Living on the street is a traumatic experience.  I can see why someone might be a little bit aggravated.”   He said he’s not homeless anymore, he has a wife and kids who are in college, and “I got aggravated from what I was hearing.  There is a lack of compassion and until there’s compassion nothing is going to work.”

He said he has gone into homeless camps on a regular basis and has walked with Mayor Robb Davis at 9:30 on a Friday night into a homeless camp.  “I was fine.  He was fine.  We went in there with compassion.”

This was just one in a series of discussions on the homeless.  This is obviously a huge and growing issue, but, as Chief Pytel pointed out, Davis is not alone in dealing with this.

19 thoughts on “Complaints about the Homeless Aired at Chamber Forum”