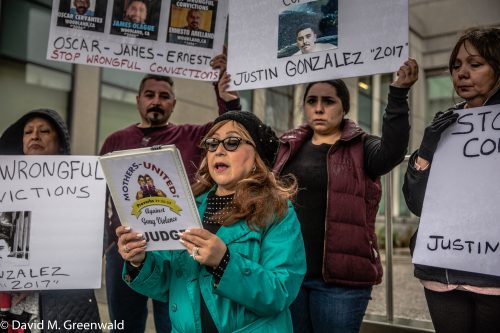 California has made great strides in criminal justice reform in past years, eliminating three strikes and reworking unjust sentencing laws and budgetary priorities among other progressive shifts.

These policies give hope that justice will be served in this state, which scholar Ruth Wilson Gilmore aptly called ‘the Golden Gulag’ in 2007. But what good is reform if the courts do not follow procedure? Besides justice reform in the abstract, will California’s courts provide justice for Justin Gonzalez?

On Friday, Jan. 26, 22-year-old Yolo County resident Justin Gonzalez is scheduled to receive a 55-year sentence for a murder that has not been convincingly evidenced in court.

Judge Daniel Maguire must not proceed on this flawed case. Instead, the District Attorney, Jeff Reisig of Yolo County, must be recognized for prosecutorial misconduct for the slippery, dangerous way he has let the trial’s key witnesses change their stories and positions.

Witness A, 16 months ago, repeatedly could not identify Gonzalez in a line-up. Changing her status from witness to victim in the intervening period, and applying meanwhile for a U-visa granted to victims of violent crimes, hardly seems like witness integrity. The wild inconsistencies in her testimony only confirm that she is not a credible source of the truth. Witness B’s status originated as co-defendant – she was a perpetrator of the crime — whose testimony now wildly conflicts with the previous testimony she gave at her Grand Jury indictment. She has openly admitted to perjury. How can it be that Reisig has incentivized these “witnesses” to serve as such, condemning a young man so that they might go free? What kind of court allows this kind of blatant misconduct, as well as other suppression of evidence and nondisclosure of critical circumstances?

Gonzalez’s family has been vocal in raising awareness for Justin’s wrongful conviction, but time is moving too quickly and their resources are few. Gonzalez’s mother organized a blood drive last

week, with supporters literally giving their own blood to raise the legal fees needed to mount this challenge.

Gonzalez’s aunt Mary, founder of Mothers United Against Gang Violence, spoke out at a press conference and protest outside the Yolo County Court on Jan. 8, listing multiple examples of misconduct in these proceedings: “discovery violations, no DNA, no fingerprints, no credible witnesses that can identify Justin being near the victim at the time of the assault… There is clear (and) convincing evidence that Justin is innocent.”

This event was co-hosted with the family of another young Latino man believed wrongfully convicted in the same court, Joshua Cadenaz-Lopez. They also charge that police did not follow procedure in handling their son’s case, and he now faces 85 to 100 years in the face of their disregard for the rules meant to protect the innocent and guarantee justice.

All the Gonzalez family wants is procedure: accountability in the court of law, and the due and diligent process every person in this country should be guaranteed. All they want is justice for Justin.

Megan Raschig is a member of Mothers United Against Gang Violence and is with the University of Virginia in the Department of Anthropology.