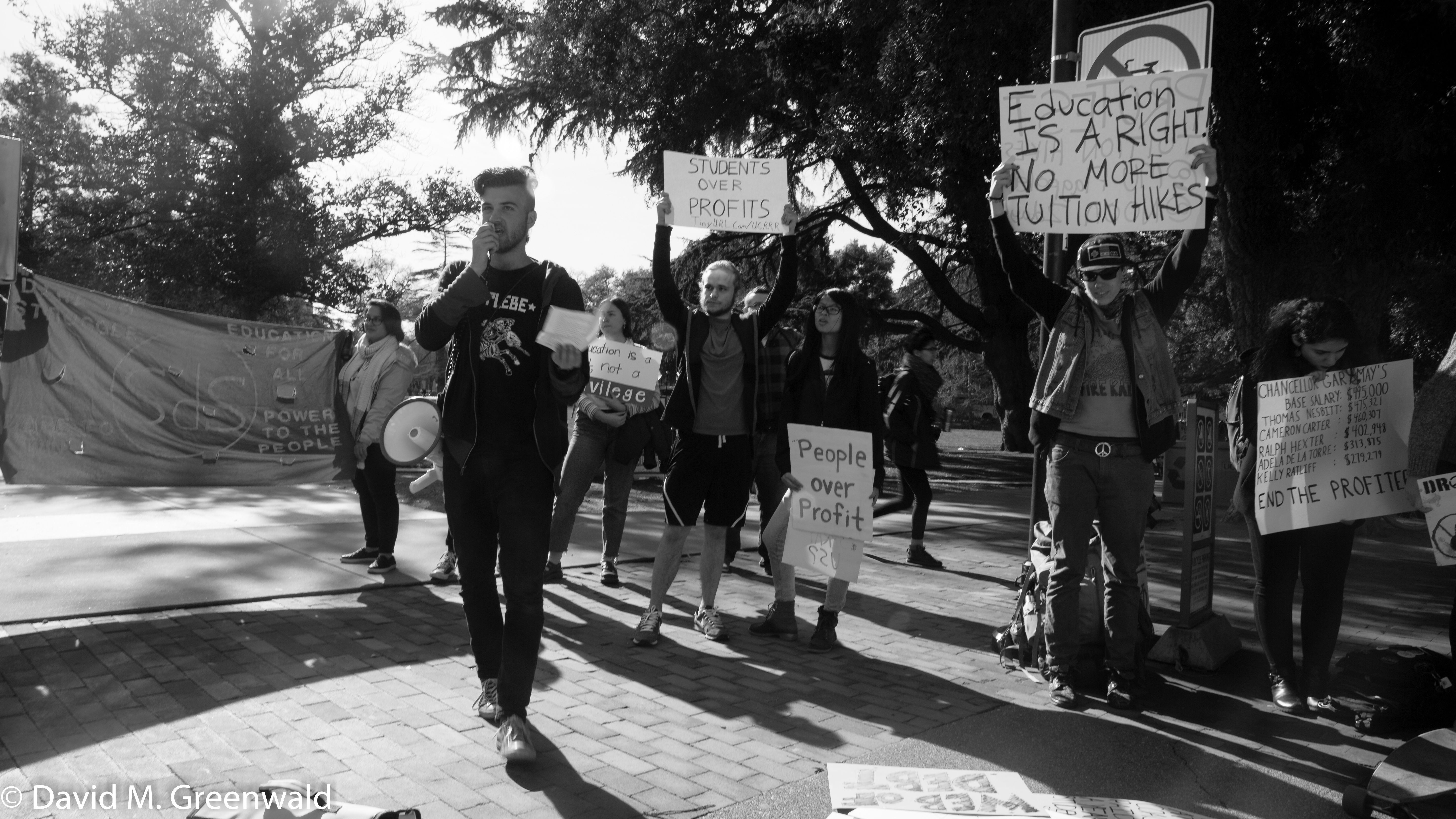 Last week the University of California proposed raising tuition and student services fees for state residents by 2.7 percent, an increase of $342 to a total of $12,972 for the 2018-19 school year.  The UC Board of Regents meets on Wednesday to consider this proposal, which would be the second consecutive tuition increase following a freeze for several years.

On Tuesday, at least 50 students gathered outside of the Memorial Union with speeches.  They then marched to Mrak Hall, chanting and protesting the chancellor. 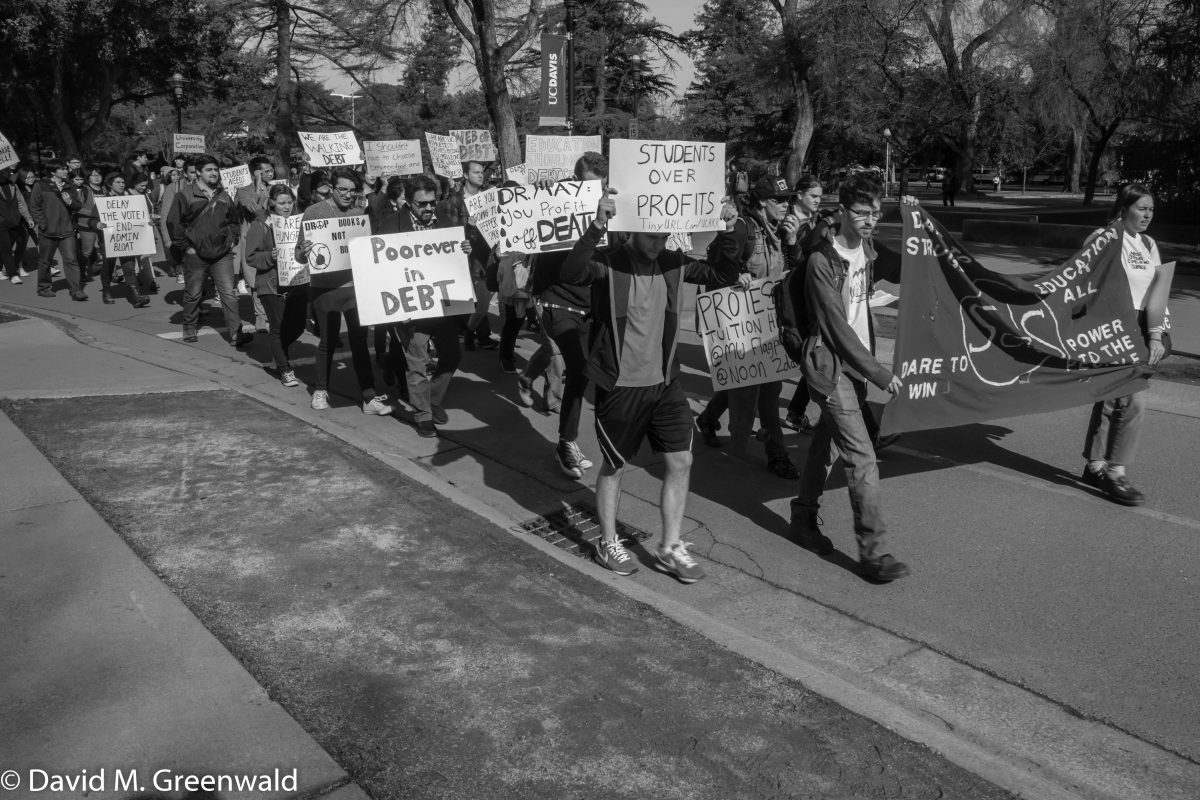 Tom said the regents claim that the money is needed because of minimum wage increases. “But they have always had the money,” they countered.  A year ago Janet Napolitano was found by the state auditor “to have $175 million of your tuition money in a private account.”

“I was there when the state auditor said it was the worst display of corruption she had ever scene in her whole time in that position,” they continued.

A university spokesperson told the Vanguard in response to the tuition hikes and protests, “Unfortunately, Governor Brown’s budget proposal provides less to the UCs than was negotiated under the multi-year framework with the university agreed to in 2015.

“In the meantime, the cost of providing a quality education has continued to rise with growing demands for increased enrollment, more housing and learning spaces. These rising costs outweigh the slight increase from the state.”

The spokesperson continued, “Having said that, even with a tuition increase, the majority of UC Davis students–56 percent–have tuition and fees covered by gift aid. In addition, 41 percent of our undergraduate students are eligible for Pell Grants. We are committed to making sure our students have access to the highest quality of education with the least financial burden possible.”

Systemwide, 100,000 UC students of limited means will actually see about $100 increase in aid due to the tuition increase; families eligible for the CA middle class grant will see a 10-40 percent discount on the amount of the increase; and only families with incomes greater than $165K will pay the full $342 increase.

Students were not just concerned about the issue of tuition.  Several who spoke brought up the issue of housing.

As Tom stated, “When they don’t give us affordable housing and the chancellor gets a free mansion… on top of his $495,000 salary…” 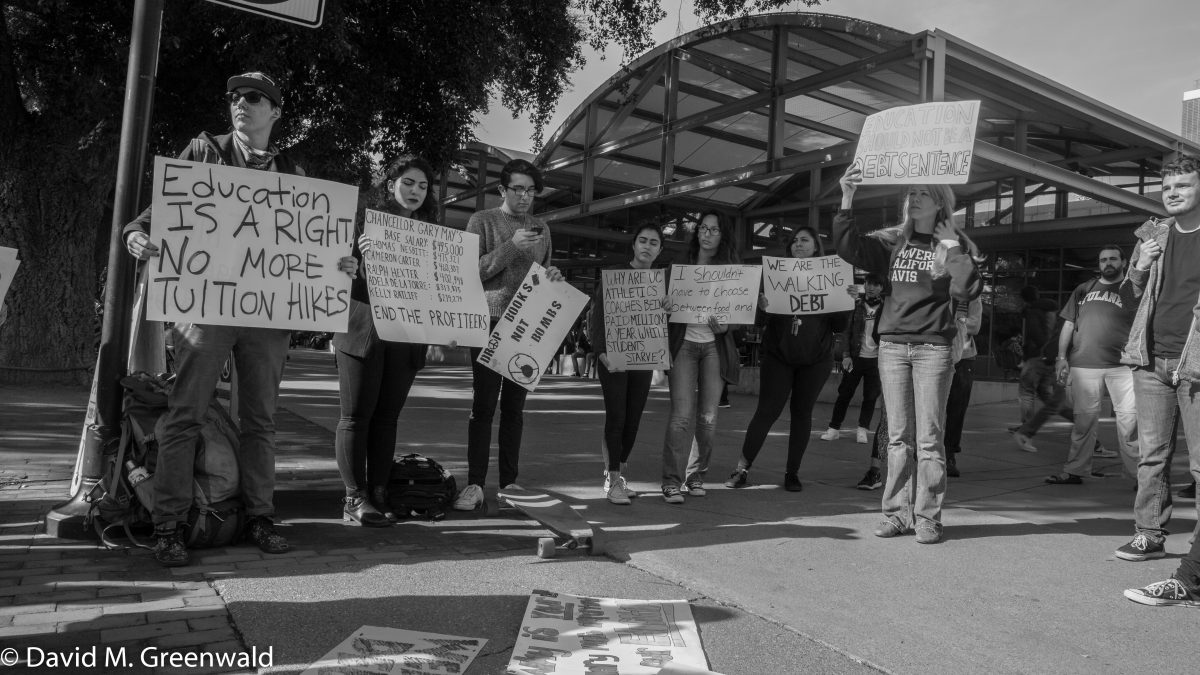 For the protesters, the regents and chancellor do not care about the students.  “They see us as vehicles for profit,” Tom said.

They argued, “It doesn’t have to be that way.”  Tom talked about their father who went to community college for free, graduated from college with no debt, and “a farm boy from Kansas, became an electrical engineer.”  Tom said, “That’s when people believed in students.

“If we are the future, why are they saddling us with lifelong debt?” they asked.  “We have to take out loans to just pay for rent.”

Amara Miller is a graduate student at UC Davis and an officer with the UC Workers Union.  She has been on campus for 12 years, having come to UC Davis as an undergraduate.

She was a physics major as an undergrad from 2005 to 2009.  “Back then my tuition was literally a fraction of what you all are paying now,” she said.  “Across the time I have been in the UC system, I have seen tuition pretty much more than double.

“The UC Regents are not our friend, they consistently put their own interests first and they consistently try to line their own pockets with their positions,” she said.  “The UC System works because we work.  We do the work and the labor that keeps this university running and keeps them in good standing.  We are the ones that pay into their pockets, and we are the ones who keep this university going financially.  It is time for us to say no more tuition hikes.” 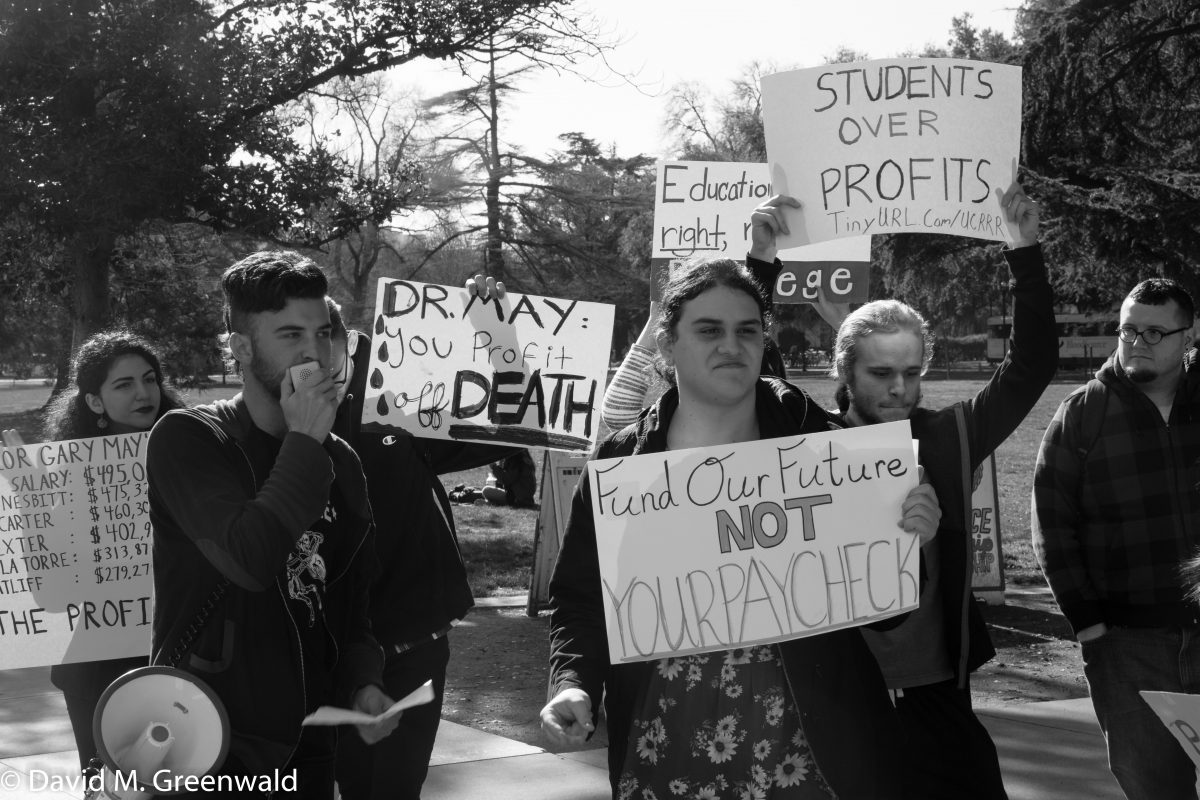 Ms. Miller added that the university “banks on the fact that you will not care that future generations of students will be paying more than you do now.  They count on the fact that you’re only here for two to five years depending on when you come in.

“They bank on the fact that you will only fight while you are here but you will not care about future students who have to pay more,” she said.

She pointed out that she was here fighting for the tuition freeze, but that most of the people around at that time are now gone.

In a flyer handed out at the event, “While we students are told our tuition is rising because of increased expenses, inflation, and decreased state funding, this is only partially the case. A huge factor of this is how we have been increasing our administration and increasing their salaries.” 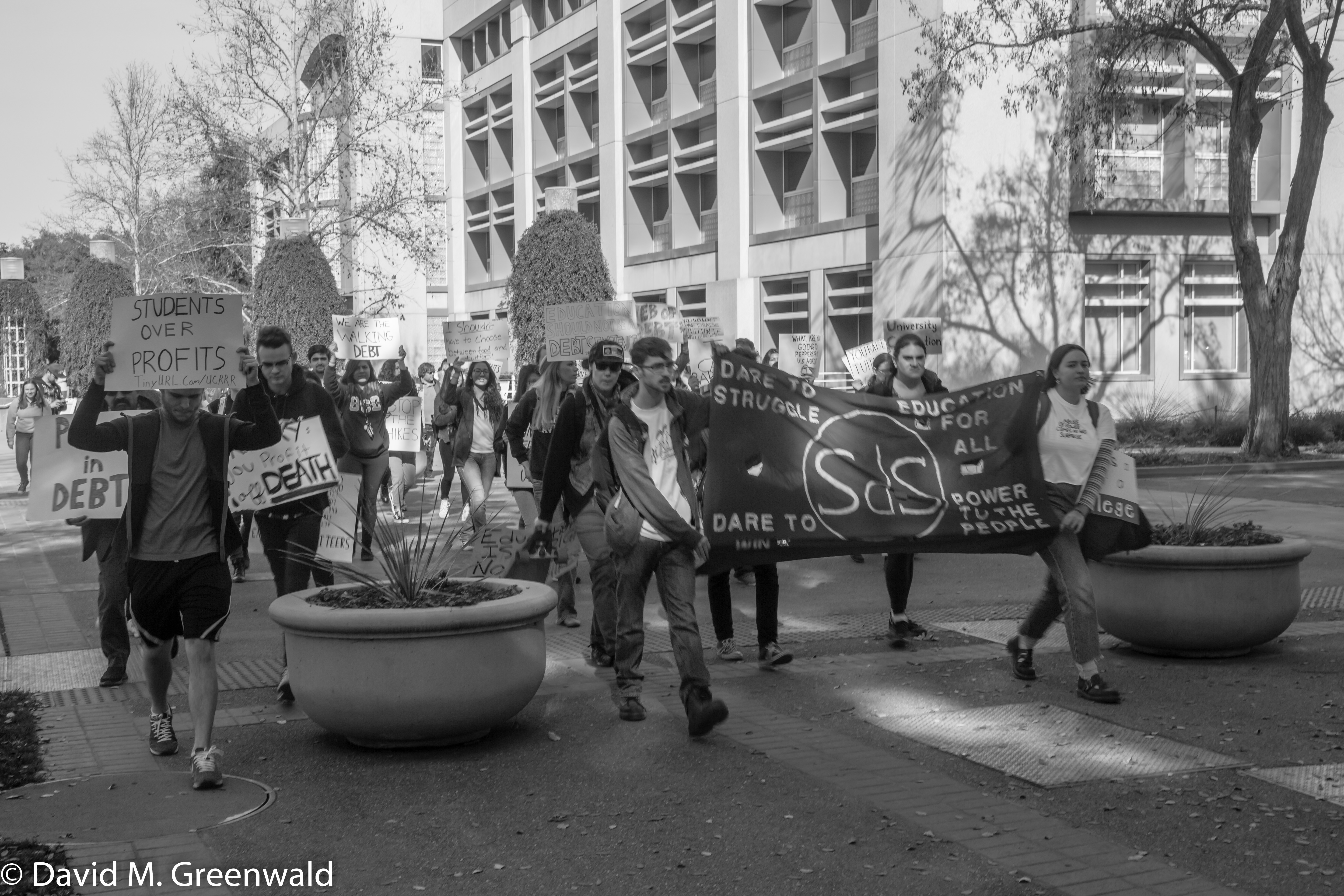 They argue: “We need to cut the admin salaries and amount of administrative positions in order to decrease the cost of tuition and increase the salaries of UC employees and student employees to a living wage.”

The students cite tuition hikes that have tripled costs since 2001.  They argue, “Combined with stagnant wages and significantly increased housing costs, we have forced students into egregious debt and even homelessness. Now the average student debt is $30,000. High tuition costs have made the university a privilege for the elite instead of a public right.”

Meanwhile they point out: “Our new chancellor, Gary May, receives $495,000 a year and a fully staffed mansion as chancellor, as well as over $300,000 from outside board positions on defense companies that profit off of prolonged war, stricter immigration laws, and increased defense spending, while students face debt and homelessness.”

They say, “It is clear that the UC has proved itself inadequate at operating for the students.” 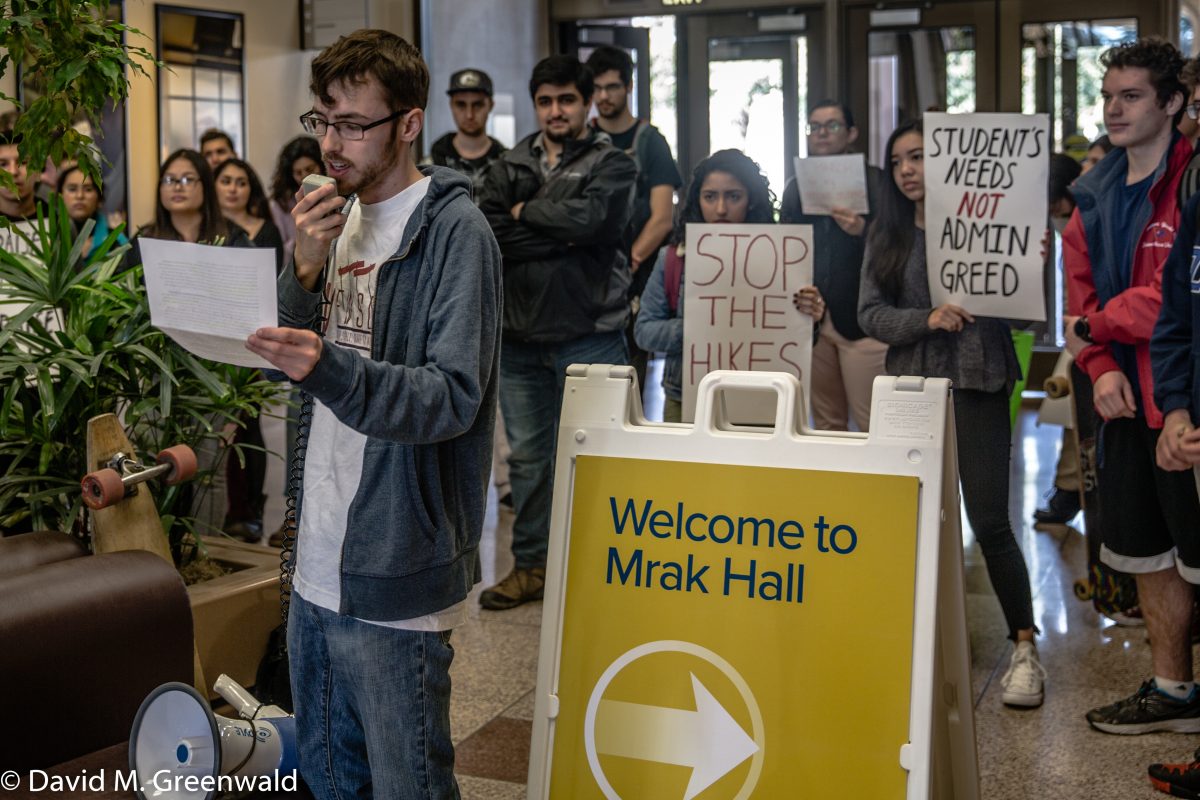 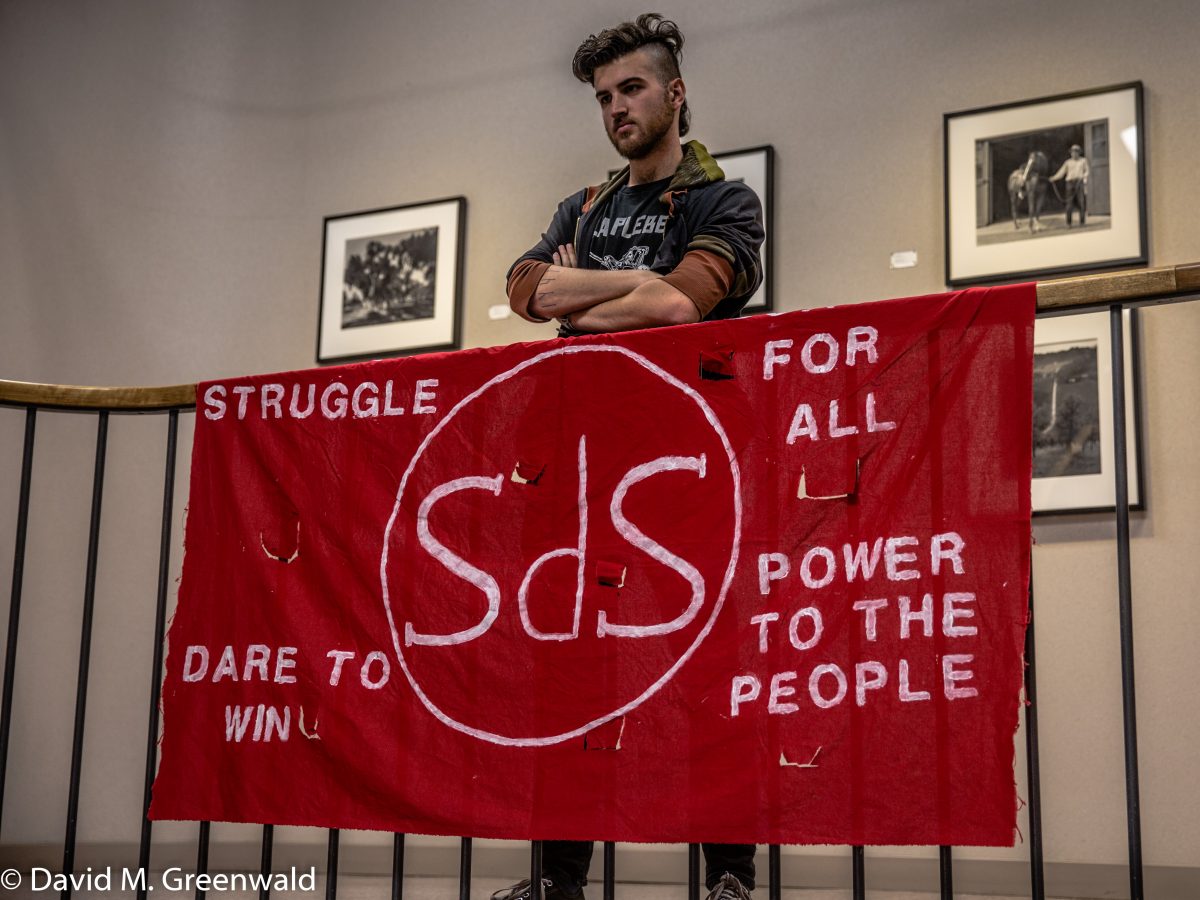 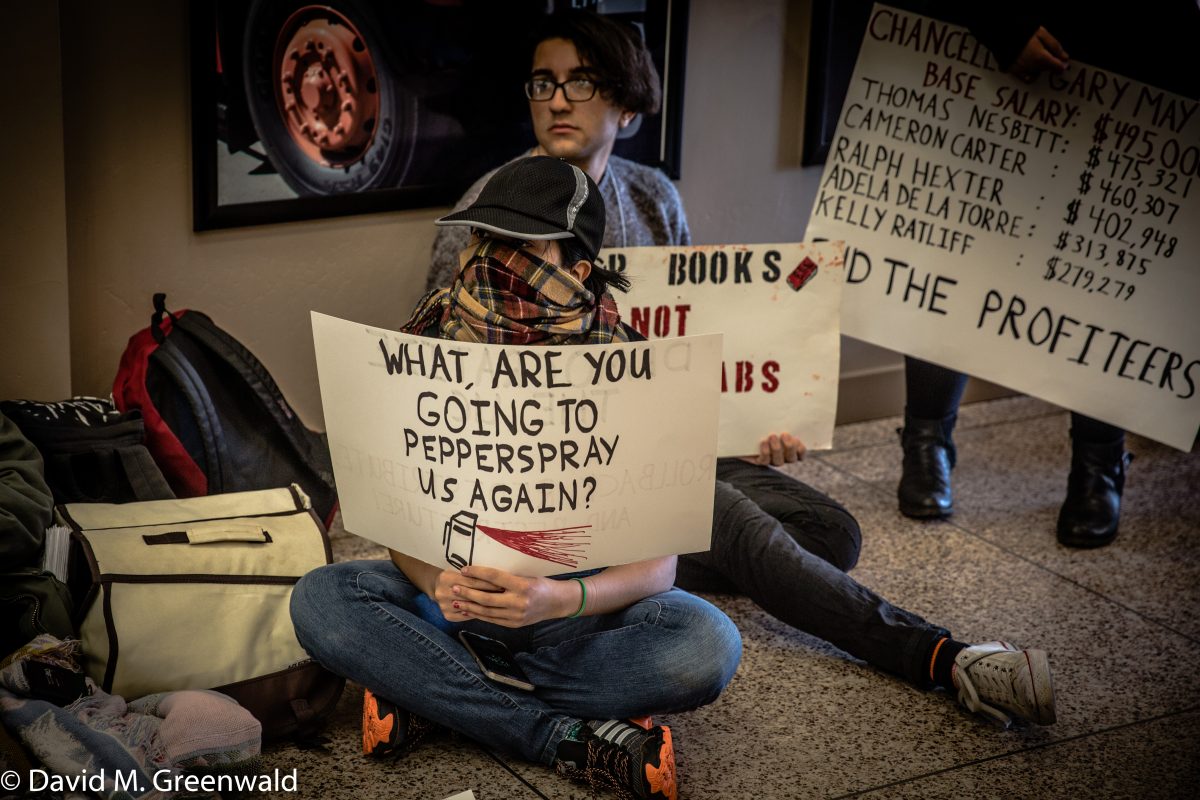 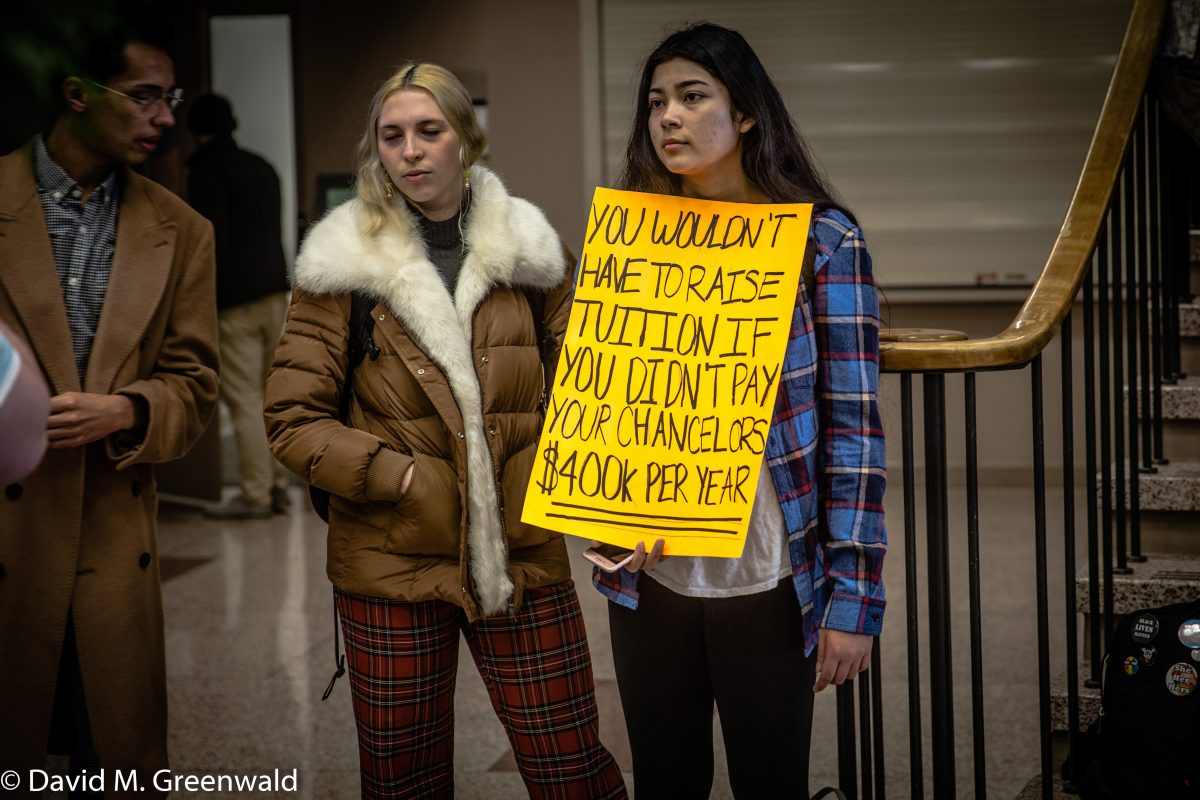 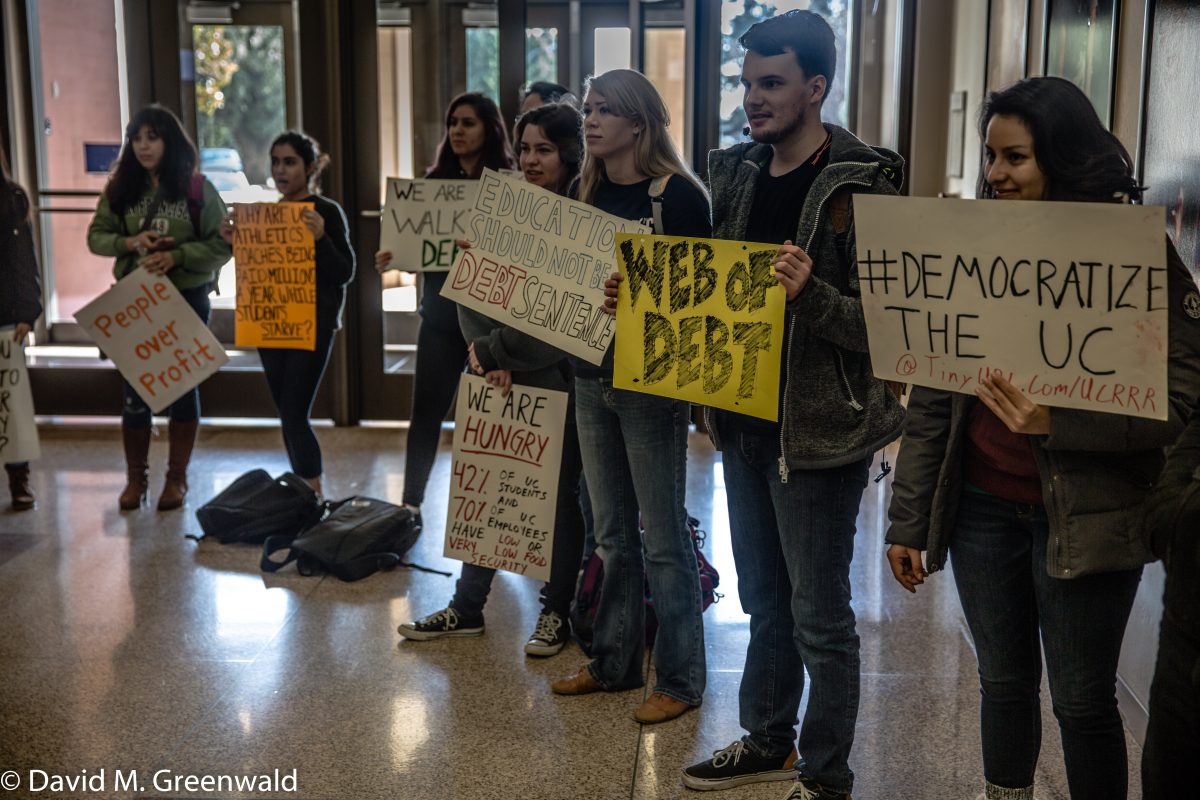