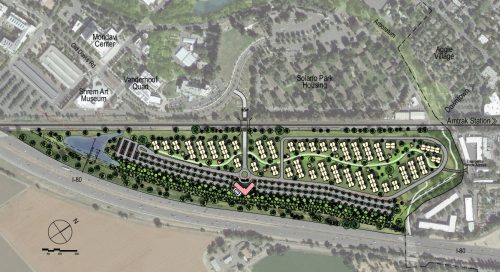 After a long night on Tuesday, the council in the wee hours of Wednesday morning voted unanimously to put Nishi on the ballot and allow the voters to decide its fate once again.  In 2016, a similar vote by council led to a narrow 700-vote defeat for the project.

The council recognized that this was not a perfect project, some argued that in many ways the original proposal was better, but they also understood that this project has a chance to provide desperately needed housing for students.

Councilmember Rochelle Swanson, for instance, said, “I was a little disappointed in the change from 1.0 to 2.0 with some of the loss of innovation.

“Things have changed since then,” she said, noting Sierra Energy and University Research Park.  She added that she was originally of the belief this should wait until November, but said, “I really feel a lot better about where this is at.”

Will Arnold acknowledged, “This is a reduced project from the project we had before, two years ago.”  He said, ‘There was a lot of things I liked about Nishi 1.0 that I’m lamenting aren’t part of

this project, in particular the innovation piece.”

He said that the Housing Element exactly describes this project: “Student housing with a connection straight to campus.” He said, “That’s what we have in front of us and that’s what is going on the ballot.”

“I’m not sure anybody is 100 percent totally satisfied with Nishi 2.0,” Lucas Frerichs added.  “For me Nishi 1.0 was superior in many ways particularly vis-a-vis smart growth principles – higher density, mixed used, commercial, residential and the R&D spaces, 300,000 square feet proposed.

“There are tradeoffs,” he said.  “A slim majority voted Nishi 1.0 down at the ballot box.”

He said that as a result Nishi 2.0 has addressed a variety of community concerns, including traffic, the MOU with the university on the undercrossing, affordable housing, among other issues.

Councilmember Frerichs added, “We live in a Measure J/R world where the voters have the final say and the voters have the choice.  If you feel that a specific project is not ready for prime time and you have any objections to Nishi 2.0, you can vote no. But I’m willing to let the voters decide.”

Mayor Robb Davis explained that the developers spent a lot of money certifying the previous EIR.  He said that “what we have is a project that fits within that EIR.  That doesn’t mean it’s an optimal project.  From my perspective it wasn’t, but it enabled us to move forward in a more timely way.”

He said, “We end up not acknowledging the trade offs in the decisions that we make.

“This is a crisis,” he said.  “Housing is a crisis.”  He said, if you run out on campus or even at cold weather shelters, “You’ll see students sleeping in their cars.

“The housing crisis in this community is real,” he said.  He said even though Nishi 1.0 was superior and met more community needs, he’s willing to support this, “because we do have a crisis.”

Mayor Pro Tem Brett Lee pushed through the change, stating, “I think the 10-5 appeals to me more than the 6-6.”

Rochelle Swanson, who made the motion, said, “Real affordable housing is so important.”  She said, “My only hesitation to change it… I don’t like the 3 to 1 swap out.”

She viewed 6 and 6 as helping “the most compromised and fragile amongst our students.”  She added, “You’re looking at a trade off between people who are more at risk than others.”

“Every one of those units represents a person,” Councilmember Swanson pointed out.

The council asked Aaron Latta to come forward to provide a student perspective.  He said, “At the bottom line, any level of affordability for students is a good thing.  This is the second project that exists that has it.”

He pointed out, “Every single one of these numbers are people, but if we don’t get this project passed, it’s that many more people without an affordable place to live.”

Ultimately the council agreed to go the 10-5 route on the affordable housing package, increasing the total number at the expense of a small number of extremely low units.

“This is an innovative path forward,” said Lucas Frerichs, adding that they were “trying to get the access and true affordability for students which has not been done before.”

Air quality issues were raised by the public, and council sought to address them.

Brett Lee said, “I view the air quality issues to be very real.”  However, he added, “I think I’m satisfied at some level with the mitigations proposed.”

He noted that this is a project by the railroad track and with a noisy train coming through, but he didn’t anticipate a lot of people having open windows regularly.

“I think that mitigations can be done to reduce the risk,” he said.  He said he was comfortable with the current proposal – rentals with students where people are not likely to live there for years.

Mayor Davis also addressed the issue of air quality and especially focused on the health related ones.

He noted that “there clearly is across the world an association between pollution and poor health outcomes.”  He cited the WHO (World Health Organization), “Locally the impacts are small and they add up to an enormous burden of disease.”

However, “None of these are saying, we need to keep people away from roads.”

He said, “It’s really hard to argue that Nishi represents a departure from what’s happening in our city.”  He said that at night the pollution drifts as much as a mile, “which means that a large chunk of the campus and the city are in those zones.

“What we’re not accounting for is if we do not build housing in this town, we continue to push people onto freeways where the health risk are extremely high,” he said.  “Even with the windows up, driving on the freeway can expose you to pollution levels 5 to 10 times higher than surrounding areas.  That’s the reality.”

Mayor Davis said that the best mitigation is “to build people houses closer to where they work and play.  That’s the solution.  Get people out of their cars…  That’s how we’re going to solve this.”

Mayor Davis concluded that “there is no evidence of increased risk for people living there.  I know I’ll be pilloried for that.  I don’t think additional studies will yield results that will tell us any different.”

The council has now put the question to the voters and on June 5, they will decide whether or not to approve Nishi.