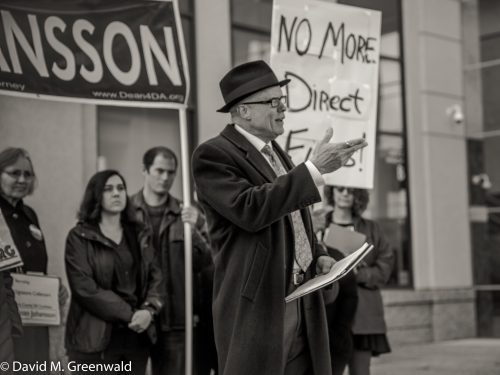 (From Press Release) – Yolo District Attorney candidate Dean Johansson today described a recent announcement by the incumbent DA as “politically motivated” – the announcement stated that the current DA may soon do what Mr. Johansson has been advocating since he entered the race…voluntarily reducing or dismissing convictions for marijuana-related offenses.

“Although this announcement is clearly politically motivated — and it is unclear whether the DA is exceeding or merely fulfilling his duties under Proposition 64 — I sincerely hope that the DA keeps his promise to help these individuals get their lives back. I’m also proud that our grassroots campaign is already having an impact and changing the conversation about drug enforcement in our county.

“If the current DA is truly committed to restoring justice I would urge him to be transparent about the harm that his past policies have caused. We all know that the war on drugs has disproportionately harmed communities of color, yet the DA’s office claims they do not track drug cases by race or ethnicity. The DA should also explain his past decisions to target medical marijuana growers. Did he truly believe that this was in the public interest and a wise use of our resources?”

Mr. Johansson has publicly taken a stand in favor of dismissing marijuana offenses as early as February 2 (just a week after he announced his candidacy), and has spoken about it several times since then at campaign events.

The current DA suggests his decision is motivated by an intention to follow the “will of the voters,” who voted, both in Yolo County and statewide, in favor of Proposition 64, which legalized adult

marijuana use. However, the current DA opposed Proposition 64.

In contrast, Mr. Johansson affirmed that he supported Proposition 64 as a private citizen, and that in his time as a public defender, he has seen how the DA’s over-prosecution of drug-related cases has ruined lives and torn families apart in Yolo County.

The DA’s press release claims that the District Attorney’s office has adopted “progressive” practices on Marijuana enforcement, but does not mention the office’s record of using extreme enforcement tactics against medical marijuana growers who have clearly made proactive, good faith efforts to comply with the letter of the state’s (complicated) marijuana laws.

Yolo County Supervisor Don Saylor likened the aggressive tactics of drug enforcement officers, who conducted four raids in 2016 under the direction of DA Reisig, to “terrorist activity” when speaking to the LA times in early 2017.

The DA’s press release also fails to acknowledge how past drug enforcement efforts may have contributed to racial disparities in Yolo County’s justice system. In an interview with the Sacramento Bee, Deputy District Attorney Jonathan Raven indicated, simply, that the office does not collect data related to the race or ethnicity of those charged with crimes.

Mr. Johansson is a former district attorney in Sacramento and Tulare counties, and has been a public defender in Yolo County (for the past 10 years) and the San Francisco Public Defender’s Office. He was a private practice lawyer for 10 years focusing on civil rights law. He is a graduate of UC Berkeley and McGeorge School of Law, and an adjunct professor at the UC Davis School of Law. He is running for district attorney to bring transparency and accountability to our local criminal justice system.