Normally party registration is not an issue in the Davis City Council race.  But when the UC Davis College Democrats held their candidate forum on February 28, only five of the nine candidates were allowed to participate due to party registration.

Mary Jo Bryan, Eric Gudz, Gloria Partida, Linda Deos and Mark West were the only five who were permitted to participate during the forum.

As a result of the article that ran on Sunday, the Vanguard got several inquiries about the registration of the four candidates who did not participate.

The Vanguard filed a request with the Yolo County Elections Office and received information on party registration and the date of the most recent registration.

Perhaps the most interesting thing we learned is that two of the candidates who were not previously registered as Democrats have now switched their party registration to Democrat.

Not only did both Ezra Beeman and Luis Rios switch to Democrat, but they did on the same day, February 27 – interestingly enough, the day before the candidate’s forum.

The new total leaves seven registered Democrats in the race with Dan Carson and Larry Guenther as No Party Preference.

Here is the full chart: 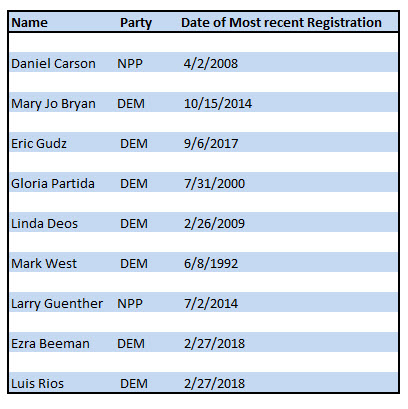 37 thoughts on “What Are the Party Registrations of the Davis City Council Candidates?”