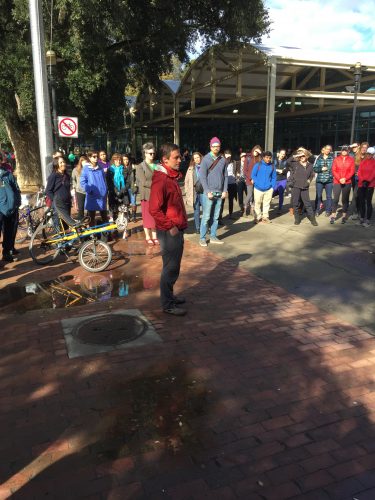 For 17 minutes on March 14, students and their supporters across the country are planning to walk out of their schools, honoring the victims of the Parkland school shooting and calling for Congress to pass meaningful gun regulation. Unfortunately, some schools view this act as a disruption and are threatening to discipline students who participate. A disciplinary response is a disservice to young people and a missed educational opportunity.

Too often, adults discipline students for expressing their opinions or simply being themselves. LGBTQ students have been sent home for expressing their sexual orientation, and girls have been disciplined when they challenge gendered uniform policies. Students of color are more likely than their white classmates to be disciplined, especially for subjective offenses like excessive noise. A hairstyle, a hoodie, or even a creative school science project can be seen as cause for disciplining Black and brown students. Punishment has even been invoked against students who attempt to speak up when they see abuse. That’s what happened to a high school student in Columbia, South Carolina, who was charged with “disturbing schools” after daring to speak up against a police officer’s violent mistreatment of a classmate.

The impulse to discipline and control young people may come from the desire to avoid a contentious conversation in the short term, but resorting to punishment doesn’t solve the problem, and it doesn’t keep kids safe. We’ve learned this lesson in other areas of school discipline. Adults too often rely on discipline and even policing to address student behavior rather than providing the
resources — like school counselors, special education services, and peer mentoring for teachers — necessary for a real solution. Moreover, reliance on punitive responses creates a school environment that feels more like a prison than a safe space for all students and staff.

In the wake of the Parkland school shooting, and after other school shootings, there has been a rush to increase the police presence in schools. There is no evidence this approach improves safety, and in practice, students — particularly students of color and students with disabilities — often end up the targets of increased police scrutiny. Fortunately, students are taking a stand against these practices, too.

experience. As the Supreme Court observed in Brown v. Board of Education, education is “the very foundation of good citizenship.” Public school is the place where students experience and interact with government, learn through discussion and debate with other students from differing backgrounds, and build the foundation for participation in a democratic society. Rather than seeking to silence students’ political engagement and quashing their desire for conversation, schools can approach this moment as an opportunity for learning about civic action.

Several districts are planning to do just this. Local and state departments of education — in Idaho, Montana, North Carolina, and New York — as well as the School Superintendents Association have provided guidance to aid school administrators in making the March 14 actions safe and teachable moments. ACLU affiliates in multiple states, such as New Jersey, Nevada, and Texas, are urging other districts to do the same.

“Security thrives in an open, trusting environment,” as school officials from Wake County, North Carolina rightly noted. The concept of school security must include making schools places where all students are safe to be themselves and express their views.