It has been a long process which first began in late 2015, but on Friday the university released its Long Range Development Plan (LRDP) along with its Draft EIR to assess the potential environmental impacts of the new housing projects.  Public comment is now open until May 29.

The key highlights of the LRDP include another surprise.  The expected campus population growth will remain the same as previously described, with enrollment by the end of the LRDP growing to 39,000.

The employment projected is roughly 14,500, an increase of 2000 employees over current numbers.

According to the LRDP, “The LRDP employment projection is 14,500 employees, an increase of approximately 2,000. Three factors may lead to potential growth in employment: (1) increased enrollment would require additional faculty; (2) increased research initiatives would require additional faculty as well as professional researchers; and (3) growth in the campus population would increase the number of support staff affiliated with academic and student life programs, as well as the stewardship of campus infrastructure and management of campus resources.”

What is new is that the LRDP is now planning on accommodating 9050 new on-campus student housing beds.  This reflects the previously agreed to construction of 8500 additional beds of new 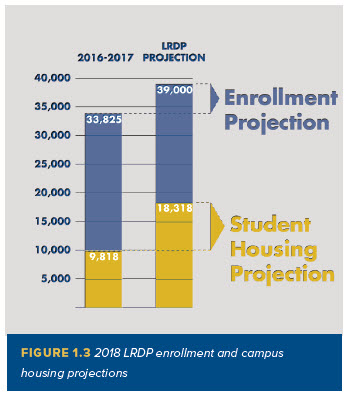 student housing under the 2018 LRDP and “occupancy of 550 additional beds at West Village that resulted from allowing doubling in existing apartments.”

That means with campus enrollment projected at 39,000, “the projected new housing would result in more than 48 percent of students living on campus.”

While that is not the 50 percent that some have asked for – it is creeping that much closer.

The LRDP EIR and the LRDP have “no height limit for student housing and we will continue to push for higher densities on less land.”

The DEIR identifies “the expected/typical range of environmental impacts and our continuing efforts to mitigate those impacts where feasible.”

The university stated, “Including the West Village Expansion and Orchard Park projects as project-specific analysis within the LRDP DEIR helps accelerate these two projects for 5,200 beds of student housing for early delivery in the LRDP period. Of the 8,500 beds of new construction in the 2018 LRDP, these first projects are targeting occupancy for 5,200 students as early as Fall of 2020.”

The West Village Expansion “would provide additional students for approximately 3,800 students north of Hutchison Drive and west of Celandon Street in the West Village neighborhood on the

It would take place on 48 acres with 1.3 million square feet of new student housing buildings along with 800 spaces of automobile parking with additional on-street parking.

Meanwhile, the Orchard Park component south of Russell and east of Highway 113 is located on 19 acres of land.

The project envisions around 642,000 sf of new student housing to be constructed for a total of 555 housing units.

“Internal roadways within the Orchard Park site would allow for safe passage of one vehicle in each direction and shared bicycle access. Additionally, approximately 480 parking spaces would be provided for student vehicles, as well as one bicycle parking space per resident. It is anticipated that solar photovoltaic would be provided within surface parking lots and could also be provided on rooftops of on-site structures,” the NOA states.

In a university release, it states, “The goal of the new LRDP is to plan for future growth in programs while providing a sustainable community where people can live, learn and grow. The plan identifies likely needs over a horizon of more than ten years and designates areas of the campus for functions including housing, research facilities and other services while targeting environmental goals in areas such as energy and water use, transportation and waste management. It does not commit UC Davis to specific projects, but currently planned and future development projects, including on-campus housing, will depend on the approval of the plan’s environmental impact report.”

Matt Dulcich, director of environmental planning for UC Davis, described the LRDP as a key component for building the campus of the future.

“We’ve put a lot of work into planning how UC Davis will grow and thrive into the future and we’re looking forward to getting feedback from the community,” Mr. Dulcich said.

Share:
Tags:EIRLRDPOrchard ParkStudent HousingWest Village
Previous : Council Candidates Meet in ChamberPac Forum – Part II
Next : My View: There Is No Real Danger that Daniel Marsh Would Be Released, So Why Fearmonger It?