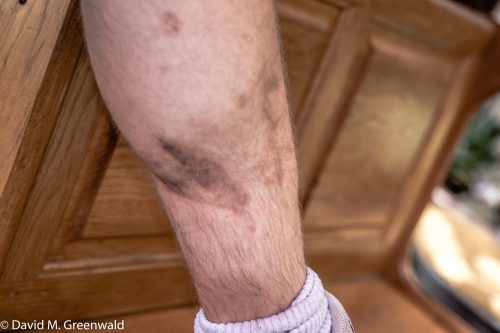 During the course of the Vanguard’s investigation into the three officers involved in the Picnic Day incident last year, the Vanguard uncovered a number of complaints against Officer Ryan Bellamy, who, according to police records, is no longer a Davis police officer.

A few years ago two young men had decided to steal a truck.  The truck was located across the street from the DMV, but one young man, who asked not be identified, started to get a bad feeling and attempted to leave the scene.

It was at this point he saw a police officer with a canine.  The officer released the dog and the dog chased him down.  The young man said that he made it about 200 feet before the dog caught him and grabbed him by the leg.

Two other cops came with a cop car, but, instead of having the dog release the man, the cops yelled to stop resisting as he lay on the ground with two cops punching him.

The dog proceeded to rip up his leg.

He was able to identify two of the officers as Derrick Russell and Ryan Bellamy.  It was unclear who held the dog.

At this point they finally subdued the dog, but the young man was lying on the street, bleeding out from his wound.  Instead of getting him medical attention immediately, they made him walk an additional 20 feet to the police vehicle.

As he moved, they claimed he was trying to attack him, so they once again slammed him against the car.

When he finally got medical attention, the leg wound required 37 stitches.

The young man told the Vanguard that he ended up doing two years and nine days on this.  This was despite the fact that his public defender believes his friend was used by the police as a lure to encourage him to attempt to steal the truck and allow the police to “bush” him.  But they could never prove it and instead he took a plea agreement.

This was not the young man’s first encounter with Ryan Bellamy either.  He told the Vanguard that in 2011 Officer Bellamy, then working for YONET, stripped him of his clothes and threatened to “beat the f*** out of him if you don’t tell me where the drugs are.”

The incident stopped when another officer intervened, telling Officer Bellamy, “He’s just a kid, he doesn’t know nothing.”

These are just the latest in a series of complaints against Officer Ryan Bellamy.  Last November, the Vanguard published video of Ryan Bellamy and Officer Justin Raymond punching Eduardo Letelier at his home during the serving of a search warrant.

Eduardo Letelier, then 43 years old, was arrested and accused of child molestation of a four-year-old girl in a high profile case involving a Davis daycare center.  He was also charged with resisting arrest.

Mr. Letelier was acquitted of the charge of resisting, while the jury ended up hanging 9-3 on the main charge in favor of innocence, and the DA last summer allowed Mr. Letelier to plead to a misdemeanor child endangerment charge that does not require registration, rather than retry him.

The video shows Officer Bellamy calling out to Eduardo, whom he knew because officers had raided the Letelier home once before, two years ago, as they ransacked the place in a failed attempt to located stolen property.  This time Officer Bellamy yells out “Donde Eduardo?” and then you hear, “He’s running!”

But by the time the officer reaches the back gate, you appear to see Mr. Letelier simply standing there with his hands in the air.  Officer Bellamy runs up to him and punches him in the face, knocking the man to the ground.

At this point, joined by several other officers including Justin Raymond, they attempt to put handcuffs on him.  Off camera, Officer Raymond then punches Mr. Letelier in the head, who is on his stomach with several officers on top of him.

At one point an officer is heard saying, “Stop resisting!”

Eventually, Mr. Letelier had his hands secured in the handcuffs and eventually had to be taken to the hospital due to his injuries.  The booking photos showed abrasions and bruises on both sides of his face.

It has now been a year since the Picnic Day incident in which Ryan Bellamy and his brother Sean, along with Sgt. Steve Ramos, used an unmarked vehicle in an effort to do crowd control.

The Interim Auditor Mike Gennaco faulted the officers involved for their aggressive approach, use of profanity and failure to properly identify themselves.

The interim auditor wrote that “while it is fair to say that the aggressive response of some members of the crowd towards the van occupants was also problematic – and formed the basis for subsequent criminal charges – a more thoughtful approach by the involved officers in addressing the blockage of the roadway would likely have limited (or) averted the resulting clash.”

He added, saying “the poorly devised strategy only served to antagonize. It caused a hostile initial reaction by some crowd members that was both unfortunate and unsurprising: instead of officers, the van’s occupants were as or more likely to be perceived as obnoxious civilians interrupting a festive event without justification. The use of profanity by one of the involved officers would only have escalated this impression and response.”

The city is moving to implement a new police oversight system where the Independent Police Auditor is joined by a Davis Police Accountability Board.  The council gave city staff the go ahead to return to them with more concrete proposals in the coming months.

Police Hammered by Interim Auditor over Handling of Picnic Day