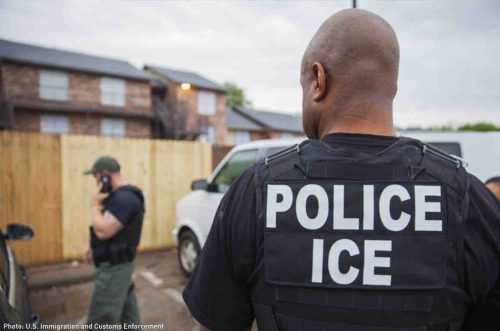 This week the Vanguard broke the news that ICE Agents entered Sacramento Superior Court last week, handcuffed an immigrant and made an arrest inside a courtroom, the first of its type in the state.  Quickly other news organizations released follow up reports (Capitol Public Radio, Sacramento Bee).

One reason cities across the state have created Sanctuary Cities and one reason for those Sanctuary Cities is they believe that in order for immigrants to cooperate with police, report crimes, and serve as witnesses in court, those immigrants have to have a belief that they will not be investigated and face deportation.

Los Angeles Police Chief Charlie Beck endorsed SB 54 last year, arguing it was “an important proposal that protects the trust between his department and the neighborhoods it polices.

“We depend on our communities, particularly the immigrant communities, not only to keep them safe but to keep all of you safe,” Chief Beck said. “Without that cooperation we all suffer.”

A report from the ACLU found that, under President Trump, “some crimes, such as domestic violence, have become tougher to prosecute because of increased fears on the part of immigrants.”

The report said immigrants are fearful of “immigration consequences,” including the possibility of deportation, so they are not helping police.

More importantly, the report found that immigrants who are crime victims are staying away “from courthouses where they could testify because they fear arrest by immigration authorities.”

These findings are based on a survey of 232 law enforcement officers in 24 states – as well as hundreds of others across all 50 states, including judges, prosecutors, survivor advocates and legal

“Prosecutors surveyed stated that in prior years, as cooperation between prosecutors and immigrant communities increased, survivors of crime were increasingly willing to come forward and assist law enforcement in prosecuting cases,” the ACLU report said. “However, over the past year, many categories of crimes have become more difficult to prosecute as a result of an increase in fear of immigration consequences.”

In 2017, the NPR did a story in Texas, where one Houston police officer told them, “People are afraid to talk to the police, and how does that help us as police do our job?”

His observation was backed by data from the Houston Police Department.  Chief Art Acevedo told NPR, “Hispanics reporting sexual assault have dropped nearly 43 percent in the first three months of this year, compared to last year. And the number of Hispanic-reported robberies and aggravated assaults are each down 12 percent.

“What we’ve created is a chilling effect that we’re already starting to see the beginning of,” Chief Acevedo said. “They’re afraid that we’re more interested as a society in deporting them than we are in bringing justice to the victims of crime.”

While the case in Sacramento involved the arrest of a defendant, the concern across the state is that this action will simply reinforce the possibility to immigrants that they will face deportation if they come forward and cooperate with law enforcement or show up in court.

“This will turn the judicial system on its head,” Sacramento attorney Charles Pacheco, who represented the man arrested, told the Sacramento Bee.

The judge in that court, Superior Court Judge Lawrence Brown, issued a statement to the Sacramento Bee “explaining that judges do not prevent lawful arrest warrants from being enforced.

“Remanding on an outstanding arrest warrant issued by another jurisdiction is the province of the Sheriff’s department,” Judge Brown said. “It happens on a regular basis, particularly in large felony arraignments courts. The court was mindful of the concerns raised by counsel about a chilling effect on undocumented persons coming to court – one articulated far more thoughtfully by the Chief Justice of California – but such concerns could not impede enforcing a lawfully-issued warrant at the moment.”

A year ago, in a letter from California Chief Justice Tani Cantil-Sakauye, she told the federal government to stay out of state courts.

The Chief Justice explained, “Our courts are the main point of contact for millions of the most vulnerable Californians in times of anxiety, stress, and crises in their lives. Crime victims, victims of sexual abuse and domestic violence, witnesses to crimes who are aiding law enforcement, limited-English speakers, unrepresented litigants, and children and families all come to our courts seeking justice and due process of law.”

Katherine Carlson, an attorney working in the Sacramento Public Defender’s Office, told the Bee she witnessed Wednesday’s arrest.  She indicated that, while the arrest might be legally correct, it has a chilling effect.

“This stuff shouldn’t be happening,” she said.  “There were some of those people sitting in court watching this thing go down.”  She was “referring to others who are undocumented and might be witnesses or victims.”

Next time the authorities need cooperation on a case, maybe the witnesses and victims will not be willing to go come forward.  And then what?

7 thoughts on “Sunday Commentary: Experts Warn that ICE Arrest in Sac Courtroom Will Have Chilling Effect across the State”