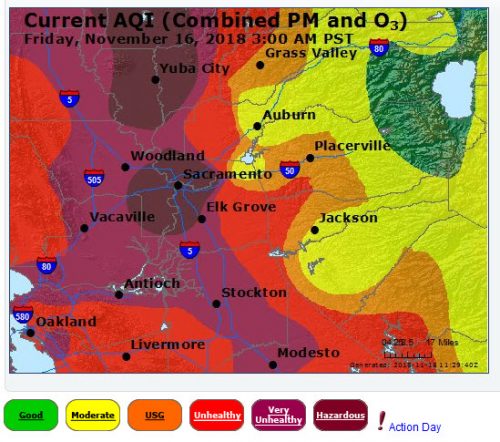 UC Davis tried to open earlier this week and the students protested the decision.  The administration after the push back re-considered their decision, and ended up closing school for the week.  Given that they lost a full week, it is hard to know what they will do about finals and graduation.

UC Davis probably had an easier decision to make than DJUSD.  A lot of people have questioned why the schools stayed open – that’s not that difficult to figure out.  It’s a difficult call to make because, while for some parents it is simply a matter of having the kids home with them, for those who work, it is a matter of making sudden arrangements for child care.

In our case, normally the kids would probably go with me to the office, but I had a full day scheduled with some activities like going to court where the kids could not come with me, so my wife ended up taking a “family” day and staying home to watch the kids.  For one day headed into a long week off, that’s manageable.  All week, that’s a different story.

It wasn’t a good situation at school for the kids this week anyway – kids with masks, doors kept shut, recess and sporting events cancelled.  The current Air Quality Index is listed at 405, hazardous: “People with heart or lung disease, older adults, and children should remain indoors and keep activity levels low. Everyone else should avoid all physical activity outdoors.”

This is the second time just this year we have had prolonged periods of large volumes of smoke settling over the valley and staying there.

One of the biggest questions is going to be – is this simply a view of what the future is going to look like, as we have hotter weather and more periods of drought and high dry winds to fan large

The short-term impacts of wildfire smoke inhalation include asthma and inflammation, along with cardiovascular and neurological issues.

Doing some quick research, I found an article from Montana written during a wildfire that had similar impacts from smoke.

They found: “While the short-term health impacts are alarming, they are, at least, easily studied. On the other hand, physicians know almost nothing about the chronic and long-term effects of such events.”

They write: “It’s possible that smoke inhalation could contribute to health problems including chronic obstructive pulmonary disease, lung cancer, vision problems, and chronic asthma, but academic studies on the topic are in short supply.”

This is now what we are exposing our kids to over the course of their young lifetimes.

They note: “The long-term health effects are less of a concern for places that suffer from smoke only very occasionally. Yet the uptick in smoke could lead to unforeseen problems down the road for communities where the geography is likely to lead to repeated exposures.”

The article cites Curtis Noonan, an associate professor of epidemiology at the University of Montana, who has been studying the long-term impacts that have grown as heavy smoke has become a more

He likened the analogy to smoking cigarettes.

“There’s evidence that, the more you smoke, the greater your risk of lung cancer,” he says. “That’s not to say you couldn’t get cancer from just one acute exposure. That’s why repeated exposure is a relevant way to look at risk—because it increases the potential that that mechanistic pathway is getting triggered.”

Apparently they don’t even have good data from studying firefighters.

John Balmes, professor of environmental health sciences at the Berkeley School of Public Health, noted, “Occupational studies of wildland firefighters are a problem because it’s a workforce that tends to turn over a lot.”

The impacts are not just physical either.  Mental health issues are also a concern.  You end up with people who are going without sunshine and also exercise.  In addition, depending on the job, you end up losing income or, if you’re a business owner, you could lose business.

But what we haven’t discussed enough is what kinds of impacts – health, economic and fiscal – we will have, trying to adapt life to a new normal.

People might somewhat callously suggest we not live in California anymore, but that begs a lot of questions over where we would live, and what kind of impact those changes will have economically, healthwise and fiscally.  There are a lot of questions going forward that have not been looked at nearly enough, because we have spent way too much time debating whether this is happening and not enough time discussing what it will mean when it does happen and when it does get worse.

66 thoughts on “Commentary: Schools Made a Tough Call, Is This Really the Future We Face?”