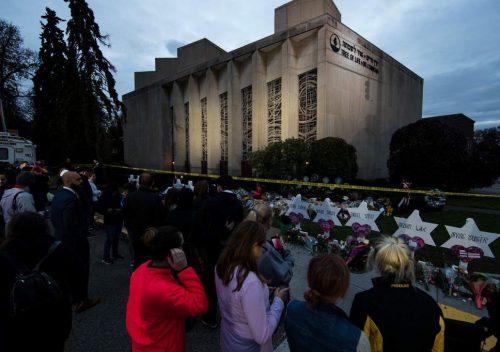 There was a lot of talk about healing through unity at the Interfaith Services held in the synagogues in Davis and  Sacramento after the attack in Pittsburgh that killed 11 Jewish worshipers. Leaders of the Muslim & Christian communities showed up to demonstrate that Unity.  More than 500 people stood with the Davis Jewish community.

The display of Unity was overwhelming…but that message does not seem to be enough.

There was vandalism at a Fresno Synagogue Friday.

If we need to heal, that means there is a disease—let’s ask what that disease is and who is spreading it?

The attack in Pittsburgh was aimed the Hebrew Immigrant Aid Society (HIAS); the shooter yelled, as he pulled the trigger, about “invaders to his country.”  Yet Trump and his supporters continue to stoke hate and fear of the other – immigrants – by framing refugees as “Invaders.”  This Invader meme was repeated on Fox TV 135 times in October.  Trump’s press releases & tweets on

calling up the Army evokes the Invader metaphor also…ignoring the fact refugees are families.

If fanning fear is the disease, what’s the cure?  While  Unity – standing with friends – can help you tolerate a disease, it won’t cure one.

There is a time for unity, a time for love and pacifism. But there is also a time for partisan action to take sides; calling out & defeating those who spread hate. What better way than through peaceful elections.

Please get involved in the election…beyond just voting.

7 thoughts on “Letter: Rabbis Call for Healing thru “Unity”– but Is It Enough?”