Matt Kowta presented his fiscal analysis of whether development in the downtown is viable to a joint commission with the Planning Commission, joined by members of the Finance and Budget Commission as well as Meg Arnold, Chair of the Downtown Planning Advisory Committee (DPAC).  The findings continue to show a challenging fiscal picture for development in the downtown.

However, others saw a caveat that this picture represents a snapshot with high construction costs and low vacancy.  As Planning Director Ash Feeney put it to the Vanguard, “We should focus on putting together a land plan that allows for scale and density on parcels where we have the greatest ability to achieve viable results.”  For instance, the G Street Corridor and Hibbert Lumber. 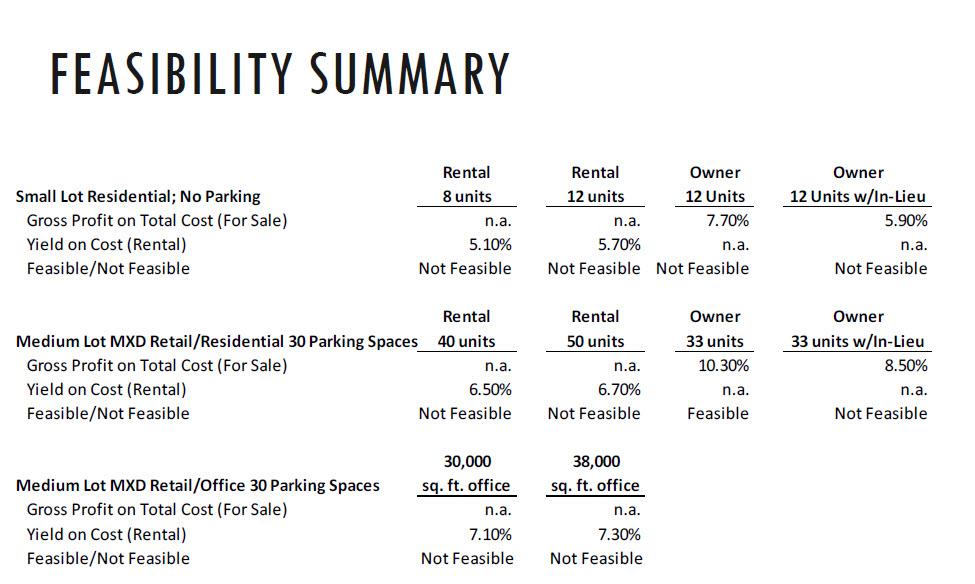 As previously reported, they looked at various configurations and sizes as well as ownership and rental possibilities.  What they found is, of the ten scenarios, only the ownership medium lot residential projected to more than 10 percent gross profit and therefore was considered to be viable.

Among his assumptions is that retail and residential are renting about $2.50 per square foot, while office is renting at $2.90 per square foot.  To meet the threshold for rentals, they have to achieve an

8.5 percent yield on cost, while a for-sale must return at least a 10 percent return on costs.

Even here he said, “It’s not extremely profitable, but it’s marginally profitable.”  He said, “We’re falling short currently with those small lot projects.“

He noted that the mixed is “close” but “not way out of the realm of possibility.“

Mr. Kowta said, overall, they are “seeing challenges to feasibility.”  But this problem, he noted, is “not exclusive to Davis.”

“We think that’s actually understated,” he explained.  “There is a very steady upward trend in these costs.”

Some of his key takeaways for feasibility:

But at the same time he pointed that some downtown projects do get built.  The question is why.

He also noted that projects which achieve scale “may be better able to absorb soft costs.”

There are some ways he suggested to mitigate feasibility problems.  One strategy would be to modify projects to optimize economics.  Here small condo projects may not be practical, but more density will hold land costs constant while improving the ability to generate revenue.

Second, he suggests leveraging publicly-owned land.  By the city contributing public land, it would reduce costs and therefore improve feasibility.

Third would be to take stake in the project, either by the city becoming an anchor tenant or partnering with developers “to obtain subsidies for catalyst projects that meet state and federal objectives.”

The city could also invest in public improvements and prioritize ones “that can help private projects.”

Finally, the city can take steps to reduce time and risk for developers.  They can do this by providing clearer planning guidelines, limiting discretionary decision-making, clearing the way for environmental approval through a Specific Plan EIR, providing a fast-track path to entitlements, and following through with streamlined and efficient building permit and inspection procedures.

Matt Kowta noted, “This is the one we really heard over and over again in the public stakeholder meetings.”

Cheryl Essex of the Planning Commission made the comment, “I wonder about the term feasibility, it seems like your using it in a broad sense.”  She noted, “It’s a disinterested investor feasibility summary – someone who doesn’t care at all about Davis and is looking for somewhere in the country to make some money.”

She said, “I think there are opportunities in Davis for our local builders that do care about Davis and are willing to invest with a lower potential return if they can get the financing, because they have a greater understanding of the plan.”

She added, “I don’t feel quite as pessimistic as I did at first glance.”  Ms. Essex said, “I think there will be people who will step up and do some of these projects with a lower threshold.”

Matt Kowta, “I think that’s very possible.  I think that’s why we’ve seen some of the projects around town that we have seen.”  He noted that what justifies that is “some perception of lower risk.”

Matt Williams of Finance and Budget said his concern about what they’ve seen “is it’s really in the form of a black box.  It’s in the form of one answer.”  He said, “We are not seeing… ways that we could make them more feasible.

One of the common complaints from members of Finance and Budget is the fact that the model from Mr. Kowta was described as proprietary, and therefore he would not turn over the data and model to them to adjust.

Doug Buzbee, also a member of the Finance and Budget Commission who also consults for developers, was pointed: “I think that as good as your analysis is, it’s wrong.”  He said, “The reason I say that is you’re not the developer.”

He noted, “Any developer is going to analyze these things in a different way.”

He noted that, in his experience, a 10 percent rate of return “in my experience, that’s probably not feasible.  That’s my experience as a developer.”  Mr. Buzbee added, “My experience is that developers, the ones who run sophisticated pro formas, are looking at 20 percent internal rates of return.”

Mr. Buzbee added, “Rather than trying to understand every potential scenario…  Our responsibility as a local government is to set the vision, I think that’s what the DPAC and the Planning Commission are moving toward, the vision as to what we want the downtown to look like… and then our job is to remove the barriers that we have control over.”

He said, “We can’t make construction costs go down, we can’t make rents go up…  But we can impact the barriers that we have control over such as extraordinarily costly affordable housing policy.”

On the other hand, Ezra Beeman submitted a revised model with some revised assumptions.  In an email he said, “Here are some of my own resulting conclusions and thoughts, for consideration.”

For instance, he found, “Three story office/retail and residential sales projects earned 14% and 12% for investors, respectively, with adjusted assumptions.”  Naturally these were more feasible.

In his comments he noted that the buildings were not selected to “make the most money” or get “the most development in the shortest amount of time,” but rather because they adhered to the vision laid out by Opticos and the DPAC.

“We have a vision,” he said.  “How fast are we expecting to get there?

“This is a point in time study,” he noted.  “These are economic forces.  What I learned in the analysis is if you were to take the costs in any one of these projects…  what you find is that the number one, two and three portion of costs come from construction, land, and if you’re in a leasing model, it’s going to come from financing.”

He pointed out that those are factors out of their hands, whereas the impact of development fees hardly moves the needle.

Meg Arnold, Chair of the DPAC, said that “the feasibility is really critical.”  She said, “If it ends up being infeasible from an economic perspective, why exactly would (we) be bothering” to do this effort?

“In that context, the comments we have heard tonight about the point in time analysis and the fact that conditions will change is really really important to keep in mind,” Ms. Arnold stated.  “It’s not a binary decision – this is not feasible, this is feasible.

“The decision that we’re facing is not an entirely binary decision,” she added.

Ashley Feeney pointed out that this was a picture right now, and they are using a static pro forma model for a plan that is expected to last for 20 years.

“It’s a 20-year outlook and if we focus too much on today’s picture in time, that may be a distraction over the overall 20-year period,” Mr. Feeney explained to the commission.  “The variables that are outside of our control are going to change.”