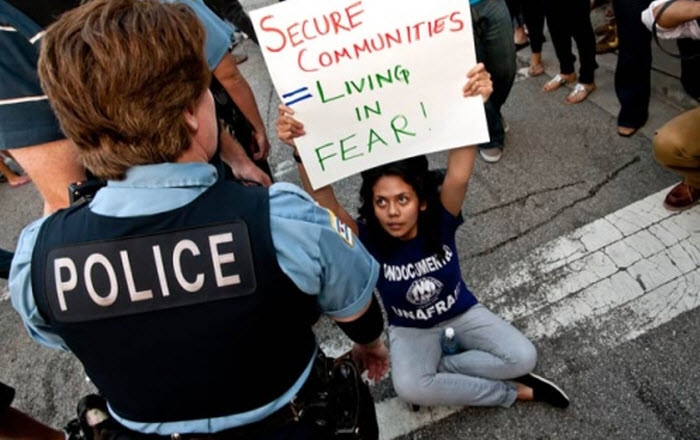 A study released by UC Davis on the deportation-focused program “Secure Communities” concluded that crime rates did not change before or after the program’s implementation.

UC Davis professor of economics Giovanni Perri and UC Davis economics department graduate student Annie Laurie Hines conducted a study on the program Secure Communities, a program that increased deportation by flagging immigrants in violation of immigration laws when local authorities arrested them. Started in 2008 by George W. Bush, SC would be expanded in 2013 by Barack Obama before being discontinued by him in 2014. In January 2017, President Trump restarted the program. The UC Davis study considered the effects of the program, namely on whether Secure Communities prevented crime.

“Using deportation as a way to reduce crime can be seen as a more extreme extension of a policy that targets people for very minor violations under the assumption that they may commit more serious crimes in the future; however, empirical evidence does not support this argument,” the paper states.

After studying thousands of local areas before and after the SC application ranging from low to high deportation rates, they claim the research suggests an increase in deportation rates had no evidence of significant change in crime, “particularly not a decrease in crime.”

“If deportations remove individuals who are more likely to commit crimes, then changes in the deportation rate should lead to a proportional reduction in the crime rate,” the paper stated.

According to a lawyer and legal director at the Tennessee Immigration and Refugee Rights Coalition interviewed by the Marshall Project, “There was no prioritizing. Everybody is fair game. The use of the criminal justice system was no longer based on the concept of somebody who has committed a crime is more dangerous—it was simply a dragnet system.”

In addition to examining the relationship between deportation and crime rates, the study also provides information on SC’s implementation and effects on law enforcement techniques.

The funding for the program was not “entirely clear,” according to the study, but Congress had appropriated Secure Communities funds for the ICE: $850 million from the current ICE budget to the program and an extra $150 million in the 2009 fiscal year, with the amount from the current ICE budget used towards Secure Communities to be increased to $1.5 billion in the 2010 fiscal year. Secure Communities also relied on local law enforcement to hold individuals suspected of violating immigration laws for 48 hours before the ICE took them into custody, a factor that utilized local resources that were not reimbursed. According to the study, these funds were diverted from other uses by the community.

The implementation of Secure Communities also appeared to have a negligible effect on police clearance rates for violent and property crimes – what the study notes as cases where police arrest the perpetrator, who is then charged with a crime, and the government must begin prosecution.

This emphasis on the effectiveness of the Secure Communities program in law enforcement stems from a statement earlier in the paper:

“If SC effectively targeted criminals or increased police effectiveness, this redistribution of resources may have helped reduce crime,” the paper stated. “However, if most people detained under SC were not serious criminals, and the program did not deter future crimes, then SC would be an ineffective and costly measure that may have further diverted resources in a way that reduced local capacity to fight crime. Despite the potential for resource displacement, we did not find evidence of any change in local resources.”

The paper notes other methods that could have been used by law enforcement that have shown more results in crime reduction, particularly focusing on methods that looked to individuals more likely of committing violent crimes.

“Our findings are consistent with these results: targeting a population that has a low probability of committing crimes, such as the undocumented immigrants, with deportations does not affect crime rates through deterrence or through incapacitation,” the paper stated.

According to previous literature referenced in the paper on immigration and crime, “much less is known about the effectiveness of immigration restriction in reducing crime.” One study from 2008 noted stated that immigrants are less likely to commit crimes than natives and a 2010 study suggests a negative correlation between homicide rates and immigration in the San Diego area. This UC Davis study also has a similar structure to the 2014 Miles and Cox study and confirmed some of that study’s findings.

Share:
Tags:DeportationImmigrationSecure CommunitiesUC Davis
Previous : Witnesses Questioned in DUI Case
Next : Commentary: Our Youth Are Worried, They Should Be, Why Aren’t You?