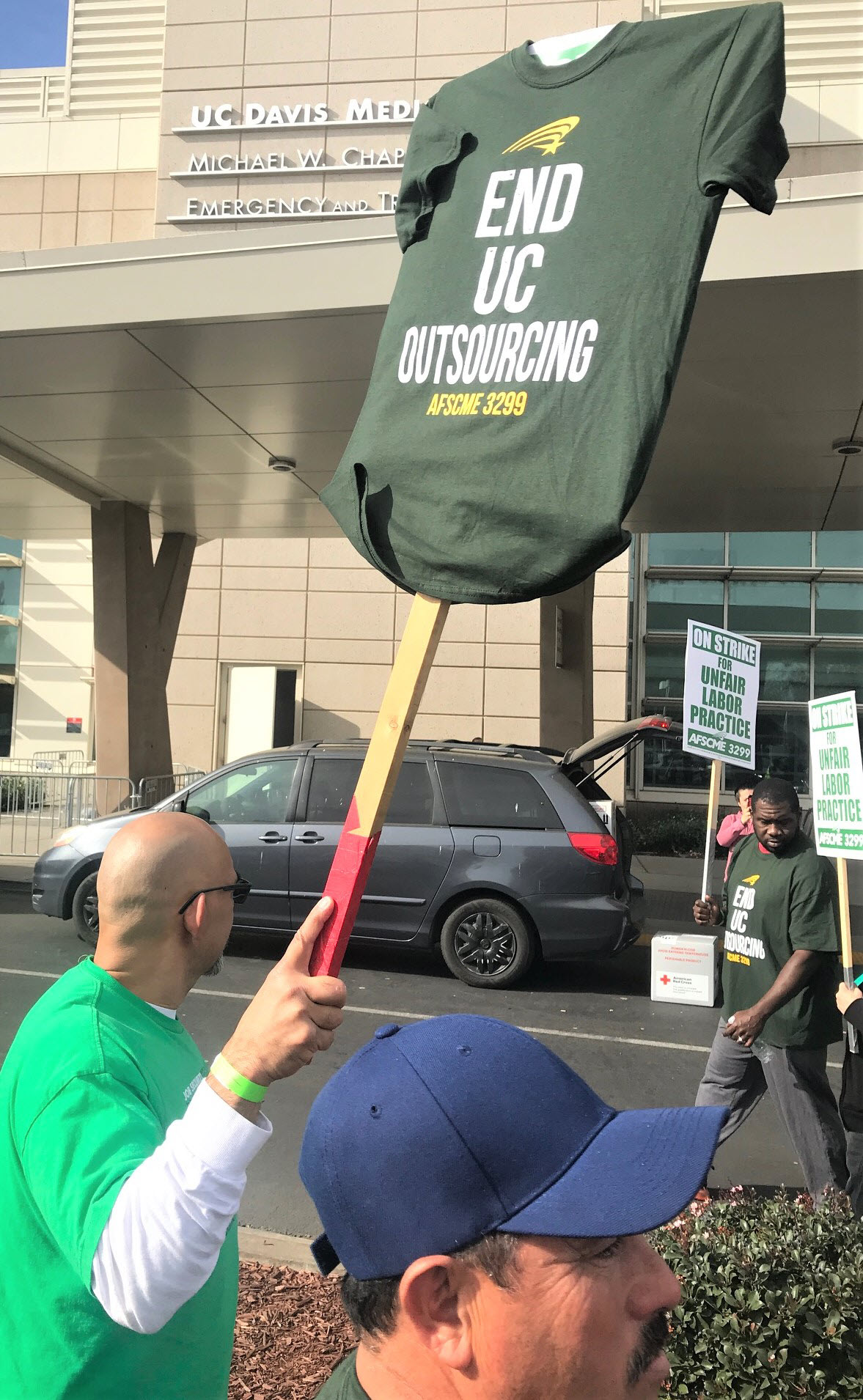 In response, AFSCME Local 3299 has issued the following statement:

“Over the last several years, UC service and patient care workers have stood together to expose the university’s unfair, unsafe and often illegal outsourcing of thousands of UC jobs.  Now, after years of dismissing the problem and the racialized inequality it creates, the Board of Regents is finally acknowledging the need to change course. That’s progress, but the devil is in the details.

A ‘policy’ isn’t worth the paper it’s printed on unless it is actually enforced.  Thousands of UC service and patient care workers went on strike yesterday because when it comes to outsourcing, the university routinely circumvents its own policies and legal obligations.  In doing so, it has secretly expanded and accelerated the outsourcing of UC jobs, while actively lobbying against bills that would have codified key aspects of its current proposal into law.

UC’s abysmal track record makes clear that only state legislation or binding contract language with its unions can deliver the accountability that’s needed to stop the university from doing the exact same thing again.“

In  2015, 2016, and 2017, both houses of the California Legislature passed measures that would have provided ensured UC contract workers receive commensurate pay with university employees who perform the same jobs.  UC publicly lobbied for vetoes of all three bills.

AFSCME represented service and patient care workers have been working without a contract since 2017.  The university has yet to offer a meaningful contract proposal on outsourcing, and no

A 2017 State Audit exposed a range problems with UC’s outsourcing practices.  These included the University extending or renewing contracts without competitive bidding and failing to follow its own policies for displacing employees in favor of contractors.

Subsequent internal UC audits and media reports have revealed other trends—including the University’s failure to enforce its own minimum wage policy for outside contractors, demands that contract workers accept arbitrary wage cuts, and well publicized incidents involving UC contractors who paid workers under multiple names in order to skirt overtime rules and other basic labor standards.

Recent research has found that the workers being adversely affected by UC’s outsourcing practices are disproportionately black women and other people of color.  As direct employees, these workers’ starting UC wages are already as much as 23% less than white men doing similar jobs, and as outsourced workers, they are paid as much as 53% less than regular UC employees. Research has also shown that African Americans at UC face a higher risk of involuntary job displacement, and their share of UC’s directly employed service and patient care workforce dropped by 37% between 1996 and 2015.

According to documents recently published by the State Legislature, the University of California has increased its spending on outsourcing of campus service and patient care jobs normally performed by university employees by 52% since 2016—and by 84% at UC Medical Centers alone.