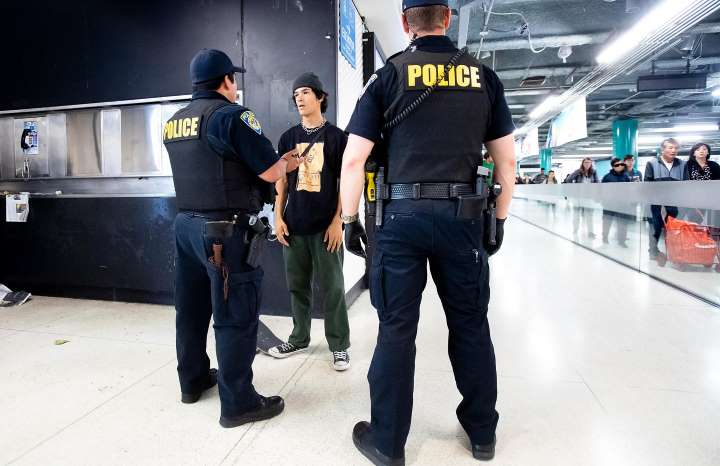 In a video posted on Twitter on Friday, a small woman with a pushcart full of churros is surrounded by four NYPD officers inside the Broadway Junction subway stop in Brooklyn. The woman cries. She pleads in Spanish with the officers and points to her cart. According to the woman who posted the video, one officer tells the woman, who is identified as Elsa, that she can either turn over her cart and receive a fine or face arrest and have the cart confiscated. In the video, the woman recording can be heard asking police if Elsa can just keep her cart and walk outside. The officer says no, explaining that the woman has been cited before.

The officers eventually put Elsa in handcuffs and drag her cart away, up a flight of stairs. Elsa said she was detained for 10 minutes, was given a summons and had all her merchandise confiscated. Elsa has five children, four of whom live in her native Ecuador. Selling food without a license in the subway is prohibited under Metropolitan Transportation Authority rules, but it rarely leads to an arrest. “In the past I was just given tickets and it has never been violent,” said Elsa during a rally Monday. “I’m afraid of going through the process of getting a license. It’s too much money.”

New York Governor Andrew Cuomo believes the subway “is a crime-ridden, dangerous place. He thinks the subway needs hundreds more police officers to make it safe again,” writes reporter Aaron Gordon in his newsletter, Signal Problems. “And he has ordered the MTA to spend $50 million a year on 500 cops to make that happen. Now, it is factually untrue that the subway is unsafe. It is even untrue that the subway is getting more dangerous. Even the cops, who normally jump at any chance to talk about how dangerous it is out there to get more cops hired, say this Cuomo narrative is a load of crap.”

A spokesperson for Cuomo said that the new officers are meant “to combat violent incidents including robberies and assaults on transit workers, and hate crimes,” although Cuomo had previously said the extra officers are needed to combat fare evasion and to address issues like homelessness. According to the New York Times, “the subway, which is already patrolled by 2,500 Police Department officers, has seen a decrease in most major felonies.”

“This policy of sending hundreds of cops into a place where there is no crime problem to speak of has resulted in the only possible outcome: lots and lots of bored cops. And the bored cops are doing what bored cops do: either nothing at all or finding something to do,” writes Gordon. In this case, that means finding people violating rules, no matter how trivial, and bringing the full force of the law down on them. Gordon lists some of the most prominent recent examples:

Handcuffing the women selling churros has garnered the most attention. Images of officers cuffing crying, peaceful, middle-age women with a cart of pastries might, Gordon muses, be “emblematic of our worst fears of what our society has become.” It was, he argues, “the only possible result of sending 500 police officers into the subway in a city with a long, troubled history of over-policing people of color and criminalizing homelessness. There was no other theoretical end result of sending a ton of cops to solve a non-existent problem.”

It isn’t merely a New York problem, either. In a video posted to Instagram yesterday, a white officer is shown trying to arrest a young man who is eating a sandwich at 8 in the morning on an outdoor platform to the BART, San Francisco’s rail system. The officer proclaims that the young man is “going to jail” for “eating,” which “is a violation of California state law.” At one point, he switches reasons and says the man will be arrested for “resisting arrest,” though the young man is standing and calmly arguing that it would be ridiculous to arrest him. The woman recording the incident asks the officer where there is any sign indicating that eating on the platform is prohibited. He is unable to provide an answer.

In 2017, a video went viral that showed University of California police officer Sean Aranas calmly taking money from hot dog vendor Beto Matias’s wallet and folding it into his hand. “Yep, this is law and order in action for ya,” Aranas said. He writes Matias a ticket for not having a vending permit and lectures onlookers about the importance of abiding by the law.

He might even have been correct. In each of these incidents, as much as the officers are wrong ethically, they may very well be right legally. This is precisely the amoral stance taken by New York City Mayor Bill de Blasio, who defended the police after the churro vendor’s detention. “I understand the facts. The facts are she was there multiple times and was told multiple times that’s not a place you can be, and it’s against the law and it’s creating congestion,” he said. “She shouldn’t have been there,” he added, and “the officers comported themselves properly, from what I could see.”

And in response to the hot dog vendor incident, UC Berkeley Vice Chancellor Scott Biddy asked to open up an investigation against the officer, but he noted that “in a case such as this, it is typical to collect any suspected illegal funds and enter them into evidence.”

Basically, they are saying, the law is the law. And if a person is in violation of the law, they can and should expect the might of law enforcement to come down on them without regard to the seriousness of the offense. They should expect to lose their belongings or go to jail or get deported. Officers are trained to get people to submit to their authority at all costs, which is what they do. There is no sense of proportionality baked into law enforcement. And they are sent on these missions to places where they can reliably be expected to target vulnerable people, poor people and people of color. “Stop and frisk” may be illegal, but the spirit of police harassment of marginalized people is going strong.

That is why Gordon is correct when he states that these arrests are the inevitable result of sending more officers into the subway system. To each cop who proudly announces to a peaceful vendor or commuter that he or she is violating the law and is subject to arrest, I would ask: “Is this what you grew up dreaming you’d do someday? What is the point of your presence here? And who would be harmed if you simply walked away?”

Beyond there being no notion of proportionality, the law itself is arbitrary. And it can change. In California, street vendors advocated for legalization of their work, citing harassment by police and disproportionate penalties. Last year, the state passed a law that said cities can no longer ban vending in parks, determine where a vendor operates, or require vendors to ask permission of nearby businesses—barring health, safety or welfare issues. Vendors are still expected to obtain permits and pay taxes. But in a nod to the unfair practices of the past, those who have previous citations on their records can petition for a dismissal.

“I never thought that a day selling corn could lead to my being torn from my family and nearly deported,” said one woman who had been caught up in the system for vending food on the street. Indeed, who would ever think that?

Originally published on the Appeal