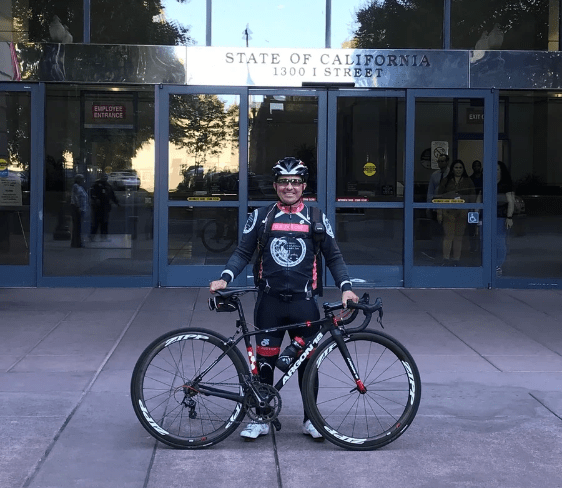 When Carlos Casillas sat on his first bicycle at 9-years-old, he had no idea the extraordinary role the bicycle would play in his life. He only knew at that time that it served as a great way for him to spend time with his father, going on long rides together.

Indeed, he didn’t even realize how much he truly loved cycling and how important it was to him until he got to UC Davis as an undergraduate. He had every intention of being part of the baseball team in college. That was his sport at the time. Or so he thought. As a freshman, he got a part-time job at the Bike Barn, teaching bike maintenance and working at the shop. He started cycling with some of the friends that he met there, and was hooked. Out went baseball, and in came a newfound love and talent for bicycle racing. From that point on, cycling and the bicycle became part of who

He now considers himself a bike racer that commutes. For years, he raced on a competitive level, putting in 500 miles of riding per week, and racing approximately 60 times per year. Now he races about five times a year. But he is still putting in some serious mileage — about 60 miles per day Monday through Friday rain or shine. He commutes to work from Davis to Sacramento and back, and also rides on his lunch hour. He is joined by about ten other workers on his lunch hour rides. In fact, seven of the other employees in his unit ride their bikes to work now, no doubt inspired by Carlos. One employee has lost 40 pounds riding to work and credits cycling with saving his life. And while this makes Carlos happy, it doesn’t surprise him. He has seen first hand the positive benefits of cycling for himself and those around him.

“Cycling has made me a better person, husband, friend and father. I never get sick. It is the hub and foundation of my life. There are obvious benefits — cost savings, health and environmental. But I also feel like cycling brings me peace and harmony, and gives me a better lens in which to view life. It brings an abundance of enthusiasm.”

Carlos has had quite the eclectic ride when it comes to cycling and its role in his life. He opened a pro shop at one point and sponsored a junior team. On that junior team was Kevin Moncrieff, who made the U.S. Junior Cycling team and rode with the likes of Lance Armstrong, Bobby Julich, and George Hincapie — heavy hitters in the world of bicycle racing. Carlos has a photo of Kevin and the other three racers in his office so he can reminisce. That’s not all he has in his office. He has racing medals, cycling-related signs, jerseys, and other cycling paraphernalia. They inspire him on a daily basis, and in turn, inspire other workers that come into contact with his office.

Carlos Casillas may not have known where that first bicycle would take him at 9 years old. Now at 57 years old, he credits all of the magic that has happened in his life back to that moment. His motto is Show Up For Life, and Cherish The Day. And he is indeed doing that … one mile at a time.

This article was written by Lisa Montanaro, commissioned by The Bike Campaign. For more information about how to “Drive Less. Ride More.”, contact Maria Contreras Tebbutt at funmaria@sbcglobal.net or www.TheBikeCampaign.com

Lisa Montanaro is the author of the book The Ultimate Life Organizer, and is a freelance writer for print and online publications. She is currently writing her first novel. When not writing, Lisa helps organizations and people be more productive. And when not working or writing, Lisa can be found on two wheels cycling!