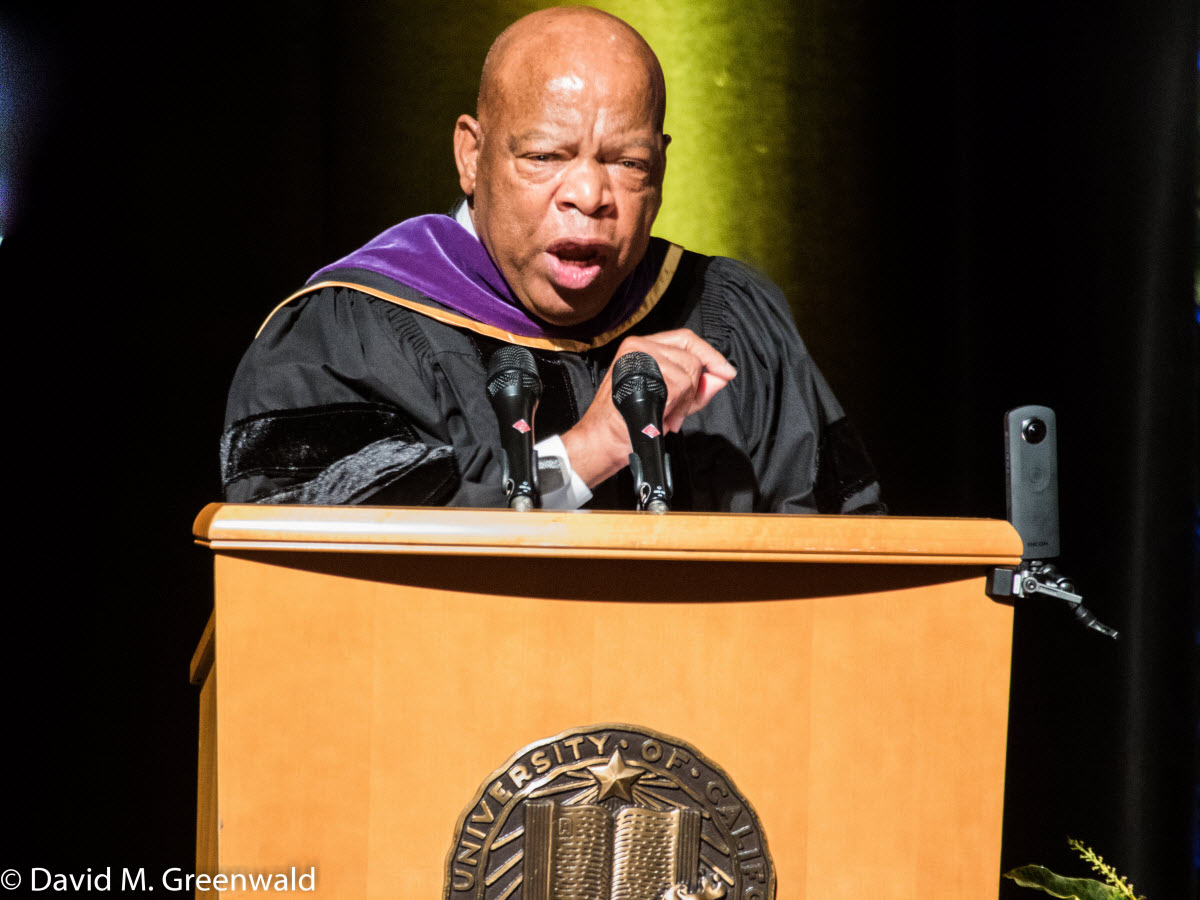 This week it was announced sadly that John Lewis has stage 4 pancreatic cancer. While many are putting on a brave face, the prognosis here is as bad as can be imagined.

The median survival is about two to six months after diagnosis, according to an article by a medical contributor in the Atlantic.

“I tell patients to expect a matter of months, not years,” Mary Dillhoff, a surgeon who specializes in pancreatic cancer at Ohio State University, told the Atlantic. “This will most likely end his life,

and there are no treatments that would prolong it extensively or cure him.”

Pancreatic cancer is one of the worst. The stunning figure is “the chance of someone being alive five years after a diagnosis of pancreatic cancer (at any stage) is only 9 percent.”

So instead of focusing on the negative, let us look at the amazing legacy of John Lewis. This is a man who has looked death in the face before – on the bridge to Selma as a young man – and risked his life to improve the condition of his people.

In my line of work, I have met many people I admire and getting to meet John Lewis will definitely rank up there as a highlight. 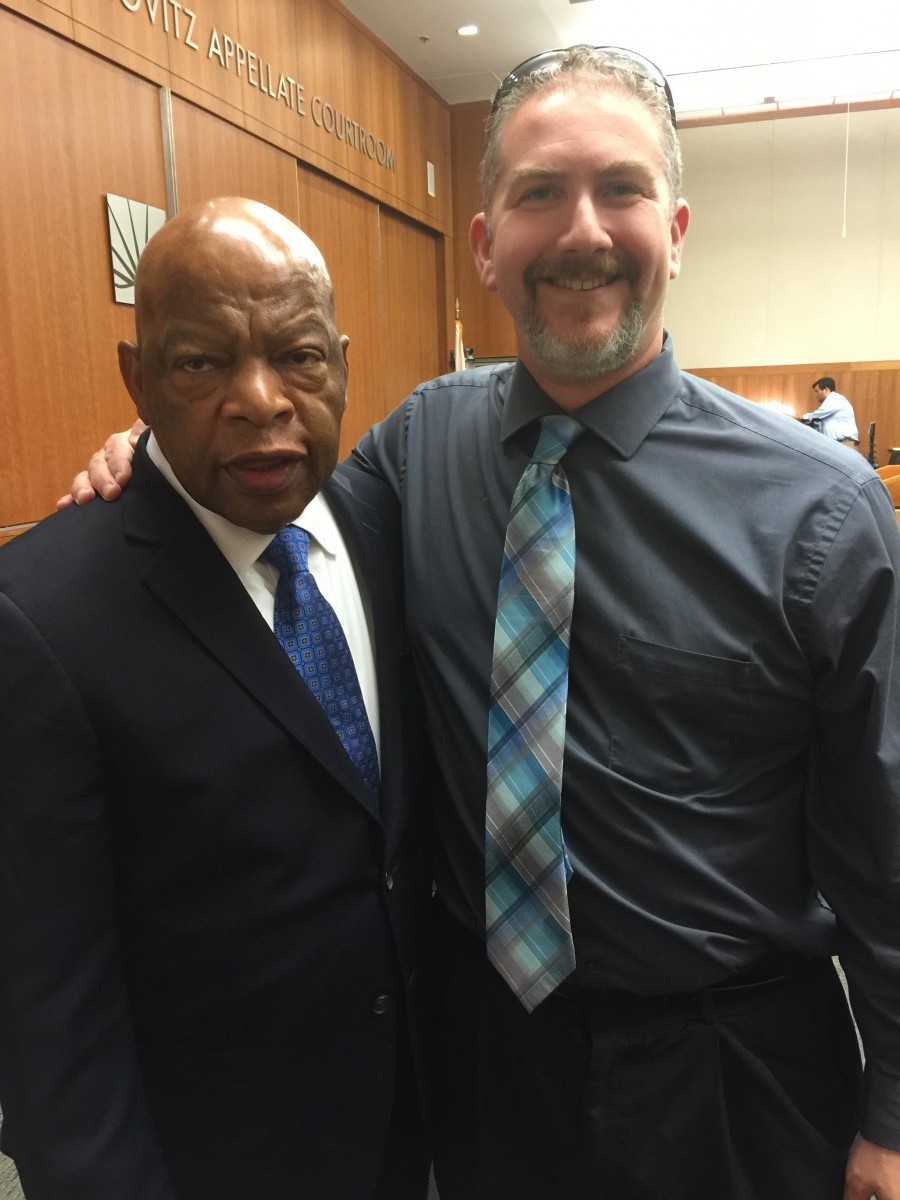 Here is the article I wrote in May 2016 on his speech at the UC Davis Law School.

On March 7, 1965, John Lewis was attacked and beaten by Alabama State Troopers as he and a group of protesters attempted to cross Edmund Pettis Bridge in an incident that became known as Bloody Sunday.

Now a 76-year-old congressman since 1987, John Lewis quipped to a large class of Law Graduates at the King School of Law, named for his mentor Dr. Martin Luther King, Jr., that he has been arrested 40 times during the civil rights movement, five since he became a congressman, and he figures he will be arrested again.  While his message was upbeat during the address, he told reporters after the commencement that he worries about the nation, going forward, and in particular about the driving factors of dissent in the presidential election.

He said he loved coming to a university like this “where there is so much hope, so much optimism.”

Congressman Lewis was clearly moved as he described being able to touch the statue at King Hall, made in honor of Dr. Martin Luther, Jr.  “If it wasn’t for Martin Luther King, Jr., I wouldn’t be standing up here,” he said.  “He helped free the black people.”

He told the graduating class, “You’re needed more than before.  You must be headlines and not taillights.”

John Lewis described his days with the freedom rides and even before, when he saw signs that separated the white man from the colored man.  He said he asked his parents and teachers why, and “they said, that’s the way it is.  Don’t get in the way.  Don’t get in trouble.”

He said, “But individuals like Martin Luther King, Jr., and Rosa Parks and so many others – it’s time for me to tell you something, I’ve gotten in trouble, big trouble, necessary trouble.  As young lawyers, you have a moral obligation, a mission and a mandate to get in trouble, to get involved, to make the world, this little real estate we call earth, a better place for all human kind.  You can do it and you must do it.”

“It’s because of the movement, the civil rights, the social justice, the women’s rights, the farmers, the gay rights, the immigrants’ rights that we’ve come a distance,” he said.  “But we still have a great distance to go.”

John Lewis continued, “You heard me say I’ve been arrested a few times.  Yes.  I went to jail.  Forty times in the 60s and five more times since I’ve been to congress.  I’m probably going to get arrested again some day,” he said.  “When you see something that is not right, not fair, not just, you must stand up, speak up, and speak out.”

He told the group of aspiring lawyers that, without lawyers, the civil rights movement would not have been possible.  He talked about the colored signs he saw.  “Those signs are gone today,” he said, and  “the only place our children and their children will see those signs will be in a book.  In a museum.  On a video.”

“Just a few short years ago, in the states of the Confederacy, many children could not register to vote simply because of the color of their skin,” the congressman said.  “There are still forces in America today that are trying to make it harder and more difficult for people to participate in a Democratic process.”

He called the vote “the most powerful non-violent tool we have in a Democratic society, and we must use it.”

John Lewis told the graduates, “I gave a little blood on that bridge to Selma.  I had a concussion.   I thought I was going to die, I thought I saw death.”  But somehow and in some way, they were able to get through, and congress passed the voting rights act.  President Lyndon Johnson signed it into law.

He said, “We’ve come a distance (as a society).  We’ve made a lot of progress, but we’re not quite there yet.”

He told reporters after the commencement that he sleeps well at night and doesn’t have any ill effects from that experience.  But he said, “It’s impossible to forget that day when we crossed that bridge – we were orderly, peaceful, there was men, women, and little children.  I still cannot understand why Governor George C. Wallace wanted to give the order to the troops.  He said that there were men waiting on the other side of the bridge prepared to kill us.  I said, brother, do you fear people?  And he didn’t have an answer.”

He said it was impossible to forget what happened. “We had a constitutional right to march that day.”

While John Lewis expressed a message of optimism, it is clear that he was concerned by the mood of the country.  “I worry about this attempt to divide the American people based on race and class and sexual orientation,” he said.  “I’m deeply concerned about the future of our country.”

He noted that we are a land of immigrants and he quoted A. Phillip Randolph from the 1963 March on Washington: “’Maybe our forefathers and foremothers all came to this great land on different ships, but we are all in the same boat now.’  That’s still true today.”

He said that he saw progress in the debate on police tactics.  He noted that, in congress, “there’s a great deal of discussion in a formal way between Democrats and some Republicans, in the Senate as well as the House, that they need to get a handle as to what is going on with the police departments all around America.”

He said that we have to fix it the same way that they had non-violent workshops and discussions during the 1950s and 60s, and he wants to see the community and police officers sit down and talk.  “Get to know each other better,” he said.

John Lewis said, “I don’t know what is happening” in terms of the tone that we seem to have reverted to in recent years, particularly around the presidential campaign.