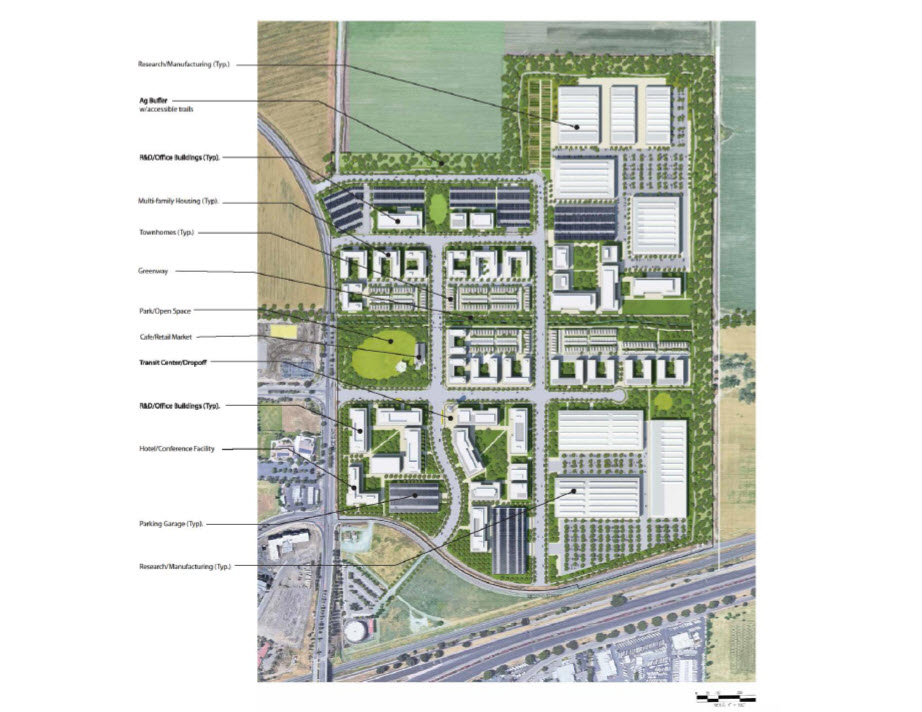 A number of opponents of the Aggie Research Campus project got up Tuesday night to complain about the lack of public meetings on the project.  While I think a lot of that is an attempt to impose paralysis by analysis on the project, they also give the city and project applicants a chance to understand potential concerns and address them.

Moreover, there are some important points that were raised here by Assistant City Manager Ashley Feeney.

“Right now we’re talking about zoning of land, not necessarily specific designs where you would typically review those details,” he said.

He added, “Absolutely the project will be going to those commissions – it’s a matter of what time does it make the most sense.”  He suggested that “it will be post this pre-zoning entitlements.”

This is hugely important for people to understand – we have created a Measure R process that may well work much better for housing which can be meticulously designed upfront and is built within a short period of time.

On the other hand, that is not how an Innovation Center is going to work.  Instead, we are going to see an upper bound for development – 2.6 million square feet of R&D space, 850 residential units, and a certain amount of that must be affordable with other standards that will be put in place.

But the build out of the innovation center is not going to be over a five- or even ten-year period.  Moreover, much of it will be internal project-dependent.  The first stage will see basic

infrastructure laid.  Perhaps there will be initial anchor companies.

But over time projects will come in, be designed at that time, and then have to go through an additional planning process.

We started to see this with the affordable housing proposal in front of the Social Services Commission.  As we saw with the comments by Ashley Feeney and some of the comments here on the Vanguard, that will probably represent a bit of a problem for voters wanting specificity and mistrusting city planning processes.

What we are used to with these projects is the Nishi/WDAAC model – the proposal is laid out, we have the exact details and layout of the project, the mitigations, the requirements and everything.  The voters knew exactly what they were voting for.

That is not how ARC is going to work.  In a way this is much closer to what I suggested several years ago.  Basically, they are going to ask the voters to re-zone the land, and they are going to put parameters on that re-zoning but the specifics are going to depend on commercial entities that decide to move to the campus.

It behooves the city and applicants to make this part very clear upfront.  Moreover, while many of the details of the project are not going to be known until much later, the city council needs to make sure that the project has as many protections, assurances, and guidelines as possible to allow the voters to be comfortable that making an affirmative vote does not allow for carte blanche authority for bait and switch later.

Along those lines, I have several thoughts.

First, while there is not going to be the specificity in design you would see with a housing project, the city can make certain requirements – things like phasing, size, density, FAR (floor area ratio), transportation, affordable housing, trees, parks, open space, etc. can be written into the project baseline features.

Allowing for more flexibility in the project does not undermine Measure R at all.  It simply allows the project that is quite different from a typical housing development to have be able to progress organically.

One of the biggest protections that voters have to guard against bait and switch is the establishment of baseline project features.

This is the key.  The Measure R process creates a degree of certainty that you do not get with non-Measure R projects.

What is being proposed here is not the circumvention of Measure R – it is an understanding that the way we have passed projects previously is going to be different from the way a project like ARC has to proceed.

With that said, there are several other things I would like to suggest.

First, while the people who came forward on Tuesday are undoubtedly opponents of the project and will attempt to undermine it and oppose it regardless, send the project to every commission that people believe will be helpful.   There really is no harm or downside to doing it and it takes an issue away from the opposition.

The Tree Commission will have some ideas about the number and placement of trees – none of that is going to be binding anyway, but you might as well have those recommendations up front.

Second, affordable housing is crucial.  What the Social Services Commission put forward as a recommendation seemed too loose for most voters.  My suggestion is to lock in some of that stuff upfront – make it on-site, and my suggestion would be to set aside five to ten acres and turn it over to an affordable housing developer to raise the funding and build the housing.  That is all stuff that can be put in the baseline features and be locked into place.

Finally, note that the applicants cannot simply develop housing first or as quickly as possible.  As we previously reported: “Future residential project proposals at ARC will be required to apply to the City for entitlements. Housing will be constructed in phases over the course of several years concurrent with the development of commercial.”

Remember, you can lock the phasing into the project baseline features and it become immutable without another vote of the people.  Those are the kinds of safeguards that can and should be locked into place.

Finally, once again, we may not have the specific designs of this project up front, but we should be able to lock enough into place to assure the reasonable voter that what they are voting for is not simply a blank check.  That what will be built will resemble what they have been told will be built.

37 thoughts on “Commentary: ARC Is a Different Kind of Project and That Presents a Challenge for Measure R Process”