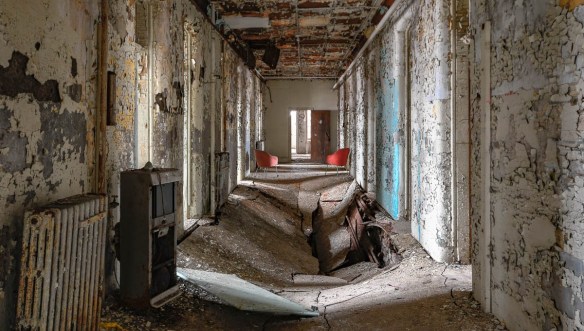 The frustration over the homeless problem has led some to advocate for going back to the idea of involuntary commitment.  This is an idea pushed for by the president, who has advocated creating government-operated mental institutions to house people for whom “something was off” but who had not yet committed crimes.

In 2018, he remarked, “You know, in the old days we had mental institutions. We had a lot of them. And you could nab somebody like this, because they knew something was off.

“You can’t arrest him, I guess, because he hasn’t done anything, but you know he’s like a boiler ready to explode, right? You have to do something,” the president said.

“We’re going to have to start talking about mental institutions,” he said.

When we have talked about the homeless and the need to house those with mental illness and drug addiction, some have called for a re-institution of the asylums, apparently hoping that we have learned something about mental illness over the last 50 years and therefore could provide better programs and perhaps monitored medication programs.

But the history of such institutions is really not a good history – and those who think we could do better now, while that’s probably accurate, need to take a better look at conditions in many prisons and jails before acting with certainty.

Involuntary commitment of course brings back images of Nurse Ratched and Ken Kesey’s 1962 novel that became a 1976 film, “One Flew Over the Cuckoo’s Nest,” which showed the abuse of such systems.

In fact, the asylum has a long and mostly bad history.  I recently read a good account of 19th Century New York’s Blackwell Island, Damnation Island, and the wretched conditions in that facility that in many ways are just as horrifying as the fictionalized account.

Many of the same problems, that existed there, existed here. There was significant question as to whether some of the people who were condemned to that island, with high rates of death and disease and higher rates of mistreatment and abuse, even belonged there.

Corrupt judges would dismiss and release the few cases of the wealthy and politically connected, and the majority of the people who were condemned to the island were the poor or were those for whom their families did not want to care. There was little protection and it was difficult even for people with means to file petitions for release.

Do you believe we can do better now?   We certainly understand basic things like medication, hygiene and sanitary conditions far better than we might have in the 19th century.

Overcrowding, violence, sexual abuse, lack of adequate health care.  These are not 19th century problems – these are documented problems in our prisons, today.

A New York Times article: “Prisons are the black boxes of our society. With their vast complexes and razor wire barriers, everyone knows where they are, but few know what goes on inside. Prisoner communication is sharply curtailed — it is monitored, censored and costly. Visitation rules are strict. Office inspections are often announced in advance.”

The New York Times received more than 2,000 photographs “that evidence suggests were taken inside the St. Clair Correctional Facility in Alabama.”

They write, “Some show inmates as they are being treated in a cramped, cluttered examination room. Others are clinical: frontal portraits, close-ups of wounds.”

California jails, it appears, are no better.  On January 6, McClatchy and ProPublica in a joint investigation report “found unchecked violence and inhumane conditions in county jails, but the state’s oversight agency has no power to stop it. Experts say that needs to change.”

What do prison conditions have to do with asylums?  It simply illustrates that poor conditions continue to exist today in correctional facilities, and we should probably not expect anything different in a mental institution.

One of the big problems cited in Damnation Island is the high rate of wrongful confinement – and in a large number of cases the people who were confined either did not live very long or were otherwise confined for life.

Obviously we have proper safeguards in place today that would prevent such wrongful confinement – right?  After all, we are talking about a vulnerable population being targeted here – homeless people.  The protection against wrongful confinement, much like wrongful conviction, would have to be some sort of indigent defense system – a system that for the criminal justice system is often stretched thin beyond repair, where in some cases defense attorneys are appointed to defend hundreds if not a thousand people in a year without a budget for expert evaluation.

In the mental health confines, you would need an independent court-appointed psychologist/psychiatrist to evaluate people’s mental competence, and that of course costs money.

We get a sizable percentage of criminal cases wrong, even with constitutional safeguards in place – civil commitment requires a much lower standard than proof beyond a reasonable doubt.

And then there is the question as to whether we can provide people with adequate health care.  Some of the proponents of involuntary confinement acknowledge it will take billions to do it right.  I agree.  The problem is that we have an example of a system where they refused to fund it adequately.

In 2018, the Marshall Project ran a story about a federal judge who ordered Arizona Department of Corrections to provide adequate health care for the state’s prisoners.

But there was a local news article that detailed how the state was “gaming a system put in place to ensure adequate health care for the state’s prisoners.”

“There is no other way to read it,” the judge said. “It’s just a game to beat the judge and his monitoring program.”

Parsons v. Ryan, which began in 2012, accuses “the state of providing care so shoddy that it amounts to cruel and unusual punishment: delayed or denied treatment, too few doctors and nurses, referrals and medication refills that fall through the cracks.”

Then here in California we have a Chronicle Article about the 37th and 38th prisoners to die by suicide in 2019.  “Their deaths pushed the suicide rate among prisoners to 30.3 deaths per 100,000 incarcerated people — a 30-year high in the state.”

Reports the Chronicle: “Experts appointed by a federal court have long sounded alarms about those numbers, saying they are too high and reveal serious flaws in how the state delivers mental health care to prisoners. Despite these warnings, the suicide rate in California prisons has climbed for the past five years, setting records in 2018 and 2019.”

The rising trend is “powerful evidence of ongoing failures” by California corrections staff, said Michael Bien, an attorney who represents mentally ill prisoners in the state.

He added, “They know what they need to do to identify, treat and properly monitor prisoners with serious mental illness, yet they repeatedly fail to follow their own policies and procedures.”

6 thoughts on “Sunday Commentary: Involuntary Commitment a Good Solution or Asking For Trouble?”