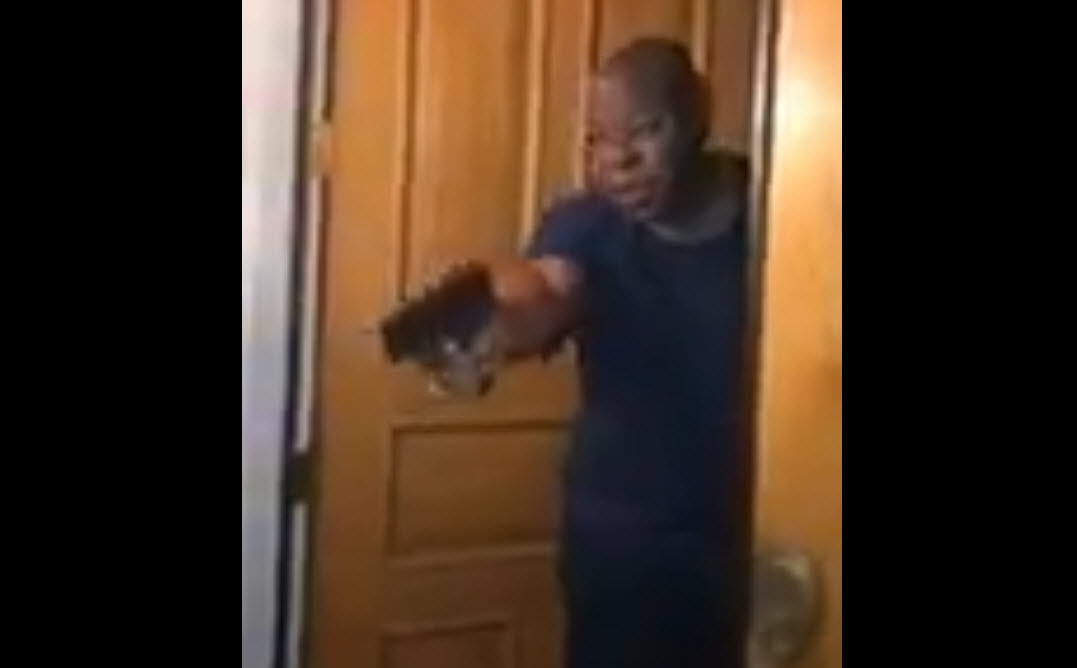 Experts are split as to the impact of the incident in Los Angeles, but the day before the election for District Attorney, the imagine of Jackie Lacey’s husband standing as his door, gun cocked yelling “I will shoot,” is unlikely to help.

The incident happened early Monday.  Video from the scene shows David Lacey, a former investigative auditor for the district attorney’s office, in the early morning hours, pointing a gun and

shouting, “I will shoot you. Get off of my porch.”

In a hastily called press conference downtown late Monday morning, Ms. Lacey offered an apology but at the same time criticized protesters for repeated harassment and threats during her time in office.

“His response was in fear, and now that he realizes what happened he wanted me to say to the protesters, the person that he showed the gun to, that he was sorry, that he’s profoundly sorry, that he meant no one any harm,” Ms. Lacey said, her voice swelling with emotion.

In a tweet Rachel Rossi, one of her opponents said: “I will never run from the community. And I never thought I’d have to say it, but I will also never threaten to shoot community members protesting for change.”

You can see the video of the incident here:

Los Angeles DA Jackie Lacey’s husband pointed a gun at @DocMellyMel’s chest and said “I will shoot you.”

Is this what Lacey meant when she promised a community meeting with @BLMLA?

According to one account, about 30 protesters arrived at the Lacey household pre-dawn.  Reportedly the demonstrate was to protest her refusal to to meet with black activists and organizers in South L.A.

“So we decided to have the meeting in front of her house,” said Melina Abdullah, a Black Lives Matter organizer and Cal State L.A. professor.

The group arranged chairs and prayed on the sidewalk, but when Ms. Abdullah and two others went the front door, they heard a gun cock.

“I thought I was being paranoid, and I said, ‘That didn’t sound good,’” Ms. Abdullah said. “And then her husband opened the door and pointed a gun and said. ‘Get off my porch.’”

The case is now under investigation by the Los Angeles Police Department’s robbery-homicide division, but any charging decisions will be made by the California attorney general’s office.

While George Gascon’s campaign has not commented, Jasmyne Cannick, communications director for the Rossi campaign wrote on Twiiter: “What if someone got nervous at the sight of a gun in their face and dropped their cellphone or something else that made a loud noise that then triggered Mr. Lacey’s finger causing him to shoot someone for no reason?  There are so many reasons that his actions are just wrong.”

POA in San Francisco Pushes Back Against Chesa Boudin – Again

In San Francisco, as the Vanguard first reported over the weekend, DA Chesa Boudin on Friday, announced new policies that will end the prosecution of people who possess contraband resulting from stop-and-frisk style pretextual searches and will no longer use status-based sentencing enhancements such as prior strikes or gang enhancements.

The San Francisco Police Officers Association is again pushing back and blasted him for the new policy reform.

“In his short tenure, Chesa Boudin has demonstrated that he is a clear and present danger to the law abiding residents, businesses and visitors of San Francisco. Get pulled over and have an illegal handgun or AR-15? No problem, Boudin will throw out your case. Have 10 pounds of meth all in small plastic bags ready for sale? No problem, Boudin will throw your case out too. It’s unconscionable that Boudin would let someone with an illegal gun go free, only to allow them the opportunity to arm themselves again. Chesa Boudin is emboldening criminals and we are all going to pay a steep price for his absurd policies.”

“Pretextual stops and sentencing enhancements based on who you know rather than what you did are relics of the tough-on-crime era that failed to make us safer,” said District Attorney Boudin. “Instead, they led to mass incarceration, targeted innocent black and brown drivers, and increased recidivism. They stand in the way of fairness and justice.”

They add, “Worse still, these enhancements exacerbate racial disparities in the justice system: 45% of people serving life sentences in CDCR under the Three Strikes law are black.”

The DA notes in his policy that “more than 90 percent of adults with a gang enhancement in state prison were either black or Latinx.”