The city of Davis released the long-awaited traffic stop data for the Davis Police Department.  The Vanguard had requested traffic stop data back in August 2019.  Under the Racial and Identity Profiling Act (RIPA), AB 953, the city was required to begin collecting the data starting in July 2018, and agencies like Davis are not required to submit data until April 2023—the city has released theirs early, becoming one of the few agencies of its size to collect stop data in California. 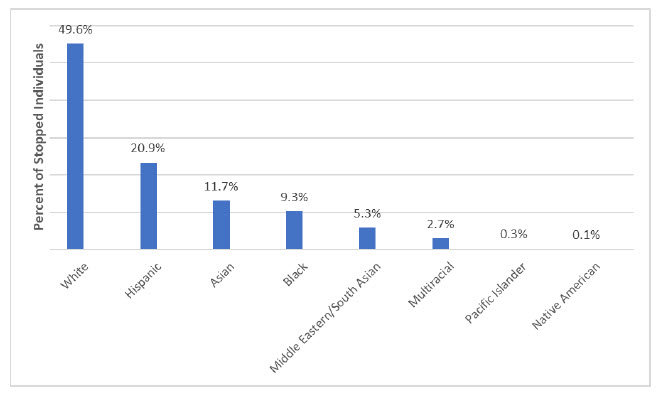 Standardizing these numbers is tricky.  Some have presented the possibility that people from out of town are getting pulled over, skewing the data.

In the city of Davis, Whites are 57 percent of the population in the most recently available data, with 21.3 percent Asian, 12.9 Latino, 2.1 percent black.

At UC Davis, the diversity is great—Asians are the largest population block at 28.4 percent, then 25 percent White, 21.4 percent Latino, and another 15.7 percent are International, and just 2 percent are Black.

From these data, it would appear that Blacks are disproportionately pulled over by police in Davis.  Hispanics would seem to be disproportionately policed in Davis as well, but given their population numbers at the university, that is more difficult to assess.  Whites would appear to be underrepresented in the traffic stop data, with Asians clearly far below their numbers. 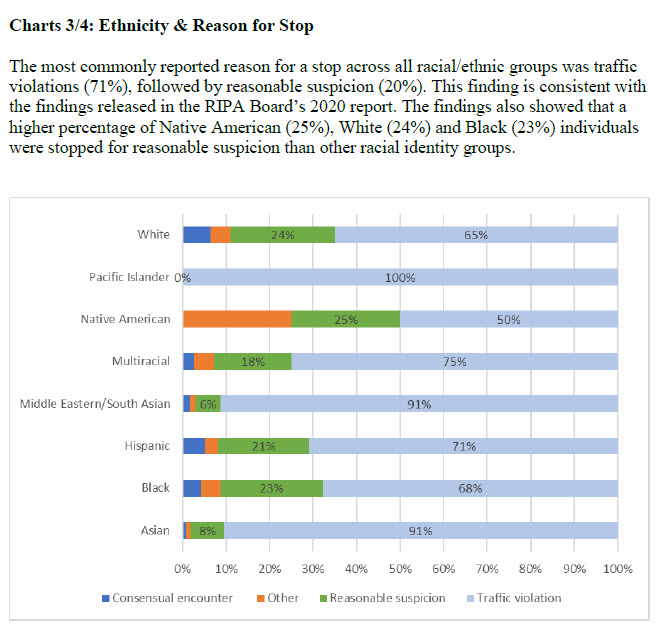 It is hard to make a lot of sense of the reason for stop data.  Looking at reasonable suspicion versus traffic violations may not warrant much.  For example, pretext stops for things like not signaling or having tail lights out would fall under traffic violations, even if the traffic violation is really a pretext.

The one we may want to look further into is the Native American group with a low rate of traffic violations and a high rate of “other.”  However, that is based on just eight stops.  Asian drivers, on the other hand, are almost exclusively getting pulled over for traffic violations. 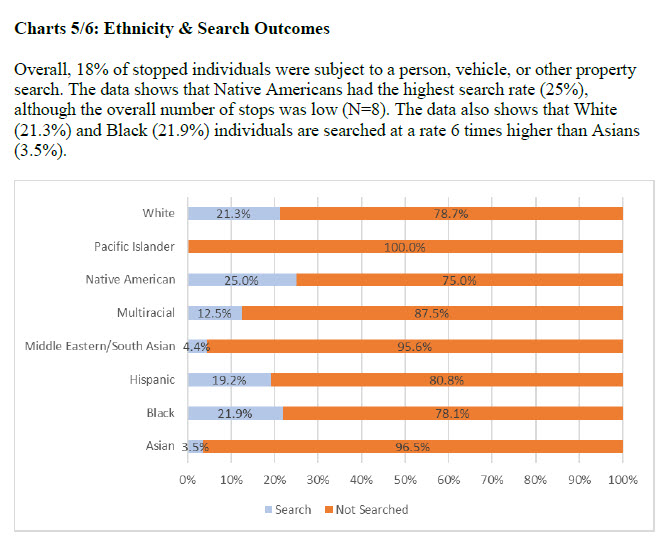 Overall, about 18 percent of stops are leading to a search.  Blacks only have a slightly higher rate of searches than Whites, Hispanics are being searched more than average, while Asians are rarely being searched.

Assessing Native Americans is a bit tricky because they only have eight stops. 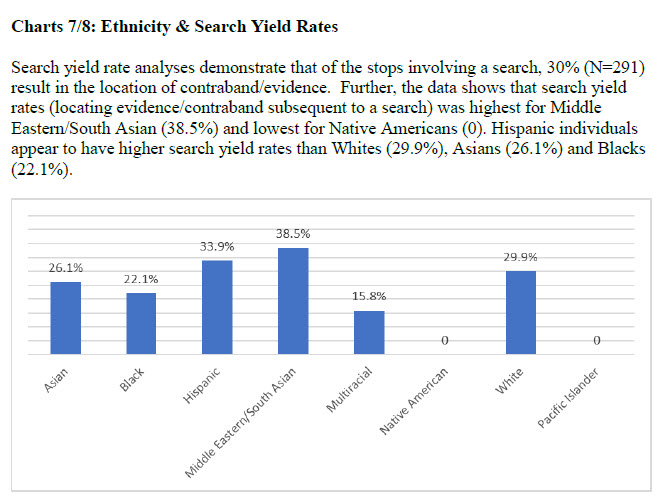 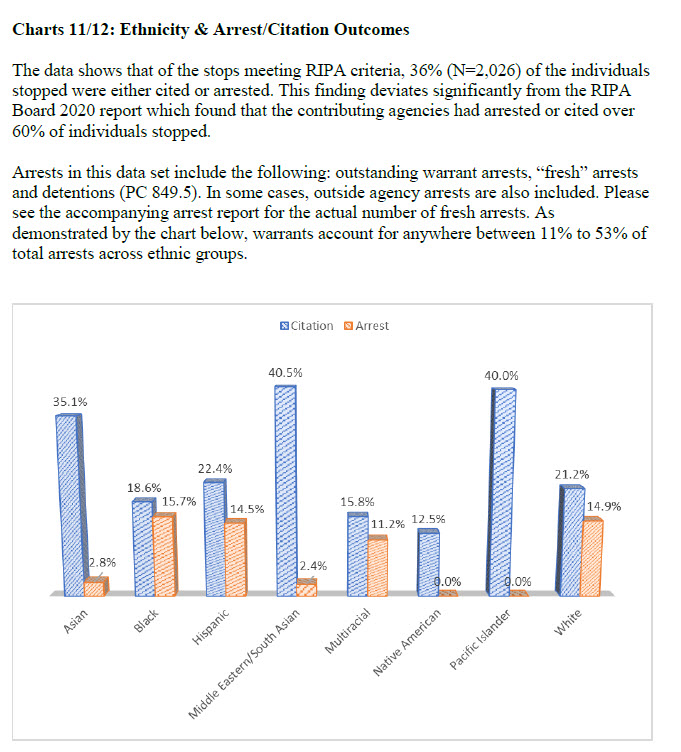 Finally, there is the arrest and citation rate by ethnicity.

There are some interesting things here.  First, when Asians and Middle Easterners are getting stopped, it is primarily for traffic violations—we can see that in the high citation rate and the low

Whites are getting citations just over one in every five times.  Hispanics about 22 percent of the time. Blacks, among the major groups, are getting the lowest citation rate—but not by a huge percentage.  A lot of the complaints we hear are they get pulled over a lot but don’t get a citation.  We see a bit of that here.

On the other hand, the arrest data is almost reversed.  Blacks are the most likely to get arrested at 15.7 percent, followed by Whites at 14.9 percent and Hispanics at 14.5 percent.  On the other hand, Asians and Middle Easterners are not getting arrested—2.8 and 2.4 percent respectively.

However, while there are some differences among Whites, Blacks, and Hispanics once the stop occurs, those differences are not huge.  Blacks are slightly less likely than Whites (14%) to get a citation, about as likely to be searched, but much less likely (35%) for the police to find something in the search.  But at the same time, it is somewhat more likely (5%) that a stop will lead to an arrest of a Black person than a White person.