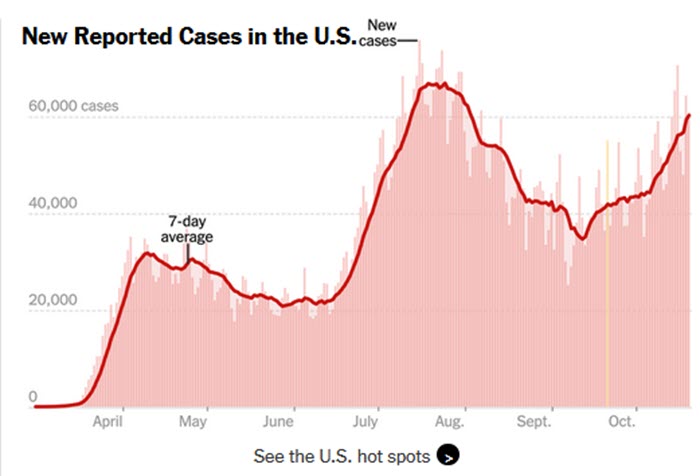 Throughout this whole pandemic, the US has shown a stunning lack of patience. What has happened is that we had the initial outbreak in March and April, we were able to go through lockdowns and other measures to level and reduce the number of new cases.

Instead of simply going into a holding pattern in May, we started to rush to re-open.

What happened was pretty predictable—the number of new cases surged in July to an all-time high. So things had to lock down again. I do think we got smarter about how to do things—we learned that, with masks, some places could stay open, businesses could serve food and other things outdoors, and so we could reduce the cases without a total shutdown.

Reports the New York Times: “After weeks of warnings that cases were again on the rise, a third surge of coronavirus infection has firmly taken hold in the United States. The nation is averaging 59,000 new cases a day, the most since the beginning of

August, and the country is on pace to record the most new daily cases of the entire pandemic in the coming days.”

This time, it is a little different. It is not clustered in acute and concentrated outbreaks.

It goes further: “The latest wave threatens to be the worst of the pandemic yet, coming as cooler weather is forcing people indoors and as many Americans report feeling exhausted by months of restrictions. Unlike earlier waves, which were met with shutdown orders and mask mandates, the country has shown little appetite for widespread new restrictions.”

The article adds: “The newest surge sets the stage for a grueling winter that will test the discipline of many Americans who have spent warmer months gathering in parks and eating outdoors, where the virus is known to spread less easily. At the current rate of growth, new daily confirmed cases could soon surpass 75,687, the record set on July 16.”

California so far has weathered this better than most—not one of the areas of huge increase. It mirrors what happened in April and May, when California avoided the worst, but then fell back over the summer to have a huge surge.

What worries me is that we haven’t really learned from any of this. Here in Yolo County, on September 30, Yolo moved into the red tier. That meant local businesses could reopen indoors or have eased restrictions. 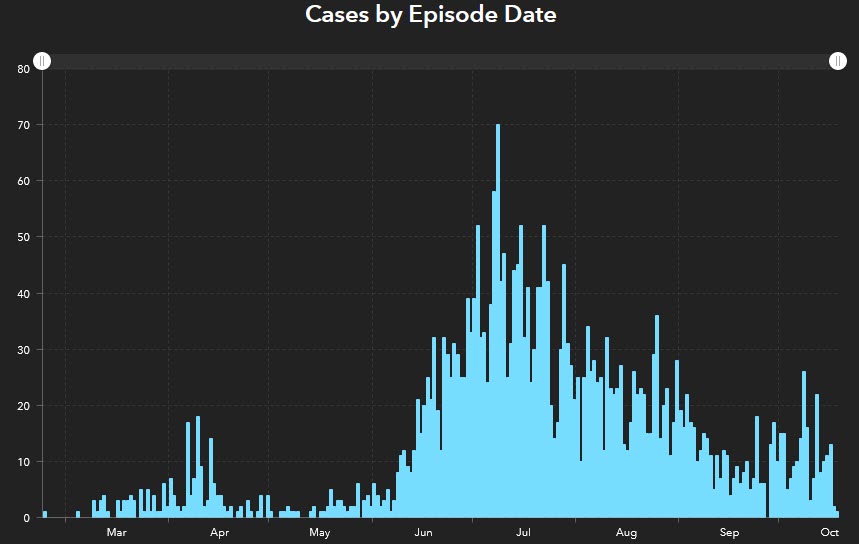 But why? What we were doing was working on September 30. We had dropped the rate back down—it wasn’t quite as low as May, when we were only getting a case or two a day, but far better than June through mid-August.

The real troubling aspect of this is that by the time we moved into the red zone, the nation was already seeing an uptick.

According to one supervisor, the county is under state guidance. But they do have the option of more restrictive measures—they just can’t go less restrictive.

We haven’t fallen off the wagon just yet, and if we act quickly, maybe we can avoid doing so.

The responsible thing to do is hunker down and wait this out until the spring, when hopefully a vaccine comes online.

Those worried about the economy—we have managed to cushion it through the stimulus process and we can continue to do so.

Unfortunately, it seems unlikely that any additional relief will come prior to the election. Senator McConnell reportedly warned his colleagues yesterday that “he had advised the White House against striking a pre-election deal with Democrats to deliver pandemic aid, fearing political repercussions.”

But, given that the election is only two weeks away, that is perhaps not the end of the story here.

Until we recognize that this is going to continue, we are going to be in this boom-or-bust holding pattern.

45 thoughts on “Commentary: Things Were Working, Why Change COVID Policies?”