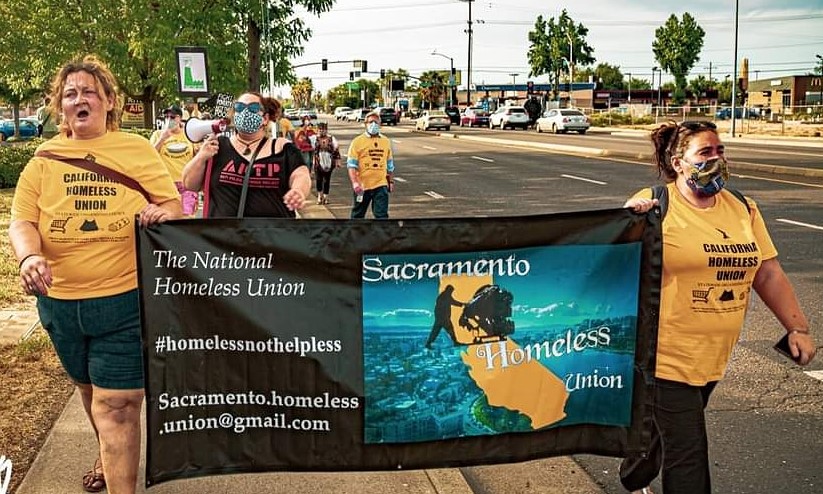 Kennedy along with Crystal Sanchez of SOUP, the Sacramento Homeless Union, demanded that the Sacramento County Health Department intervene in the current evictions of an encampment for the unhoused on Stockton Blvd.

Earlier in the week, a sweep was already made on 47th Street and Stockton, and now unhoused people living on the nearby, privately owned 50101 Stockton Blvd. lot were being forcibly removed without receiving the proper and necessary resources, especially for those who are sick with COVID-19.

With many shelters shut down due to the COVID-19 pandemic, or filled to maximum capacity with long waiting lists, these people really have nowhere else to go, and it seems that the city of Sacramento is not meeting these people’s needs.

Sanchez addressed the status of the jeopardized lot, explaining that it is privately owned, but that the owner “gave the city of Sacramento six months to house and place these folks, and they’ve done nothing… the negligence of the city is super important here.

She was noting that the Centers for Disease Control (CDC) months ago issued recommendations to communities to not do what Sacramento is doing—breaking up encampments of the homeless. The CDC said such action would spread the homeless to other parts of the area, including any COVID infections.

According to Kennedy, there are more than 11,000 homeless people in the city of Sacramento, including 70 under the age of 18. More than 100 of those people live in the threatened encampment, and with the heavy rainstorms approaching later this week and temperatures dropping, the immediate concern is finding them safe shelter to protect them from the hazardous elements.

Immediately opening up a “warming center,” a safe place for the unhoused to go when the weather is unbearably cold, is high up on Sanchez and Kennedy’s list of asks.

“They are bringing out a list of fraudulent resources that have been shut down since March of 2020,” Sanchez continued. The only resource provided, she said, was an attempt to move the women into a nearby shelter four days ago, which has since been cancelled due to an outbreak of COVID-19 in the shelter.

Kennedy brought up a recent example of an unhoused pregnant woman with whom she has been in touch, who was provided housing by the Sacramento police at a local motel.

“They placed her there without any food, without any way of communicating with folks,” said Kennedy, explaining that the woman had found a way to call her and asked for food. Kennedy and her husband immediately drove food and other necessary supplies to the motel the next morning.

“If they’re going to provide emergency housing and shelter, you just can’t drop off a pregnant woman without any resources, whether it’s a phone, food—and that’s been happening” said Kennedy.

Sanchez also claimed that COVID-19 positive, unhoused patients that had been in the hospital were only dumped back out on the streets, further infecting others in the encampment where testing is not prioritized.

Kevin Carter, a representative for the Sacramento Poor People’s Campaign, went to the Stockton Blvd. encampment earlier Tuesday to see for himself exactly what was going on. Carter explained that he works to provide unhoused people with basic needs that they are unable to obtain.

He told members of the conference that the city supplied security guards along with a police presence to ensure people left. Carter witnessed one man who didn’t agree to leave and was placed in handcuffs.

“Both of these groups are very aggressive in their tactics,” Carter said, “they were even aggressive with me, telling me that I could not be on the property.

“I tried to explain to them that I’m here to see if there is anybody here that may need help, and they said it doesn’t matter,” continued Carter.

Carter also said that when the unhoused people moved the belongings that they could carry to the sidewalk, they were once again told to move as it is private property, even though sidewalks are public domain.

“They’ve ordinanced everything to death where people can’t exist anywhere,” said Sanchez, “you can’t be on the sidewalk, you can’t be near a street because it’s public safety, you can’t be on an empty lot even if it’s for sale, they’ve given them no options.”

“It’s hard for people like me and other people that do basic needs,” Carter said, “to go out to these encampments and fulfill the needs of the people, when they’re being pushed and dragged and displaced.”

Despite the risk of spreading COVID-19, Carter said that neither the security guards nor the police officers were wearing protective masks.

Carter stressed the fact that the biggest issue is the absence of the city and Sacramento’s elected officials from this crisis.

“We’re not hearing back from city officials, even at the COVID-19 call,” Carter said. “The last three meetings we have had, everybody has been at the meeting except for the city, and that is a big problem, because…nobody knows what they’re doing.

“Especially with Eric Guerra,” Carter continued, “this is in his district. Eric has been quiet, he has not said anything, he has not come forward to do anything for the unhoused.”

“When it comes to the COVID money for the homeless, they’re quick to come and grab it, but we have to actually question, what are you really doing with it, and what we see today, you’re policing, you’re policing and that’s it, but you can’t police poverty… you have to do the right thing with it, and that is to give organizations that come out and do this work and make sure that they do it diligently, and be patient with the people that are going through these struggles,” Carter added.

Homeless advocates have previously revealed they have discovered that much of the pandemic funds from state or federal sources, and other city funding for the homeless, have not been used to

Instead, it has been spent—millions of dollars—to pay for overtime for police, who are the ones who tear down the only “homes” the unhoused have, destroying tents, sleeping bags and other meager items.

“This is the city and county’s responsibility,” said Sanchez, “we elect these people, it is we the people, all of us, not just these folks that think they can be in political control.”

She explained, “We know that the local health officer may take any preventive measure that may be necessary to protect and preserve the public health from any public health hazard during any ‘state of war emergency,’ ‘state of emergency,’ or ‘local emergency, as defined by Section 8558 of the Government Code, within his or her jurisdiction.

“Furthermore, the Board of Supervisors of each county shall take measures as may be necessary to preserve and protect the public health in the unincorporated territory of the county, including, if indicated, the adoption of ordinances, regulations, and orders not in conflict with general laws, and provide for the payment of all expenses incurred in enforcing them.

”We ask that the unhoused be put in hotels under the definition of shelter in place which is to find a safe location indoors in the case of an emergency and stay there until they are given the ‘all clear.’”

“Studies of human biology indicate that cold weather injuries can occur in the general population during low (>55 °F) and moderate (32−55°F) cold stress, in addition to high-cold stress (<32 °F) and the likelihood of hypothermia increases by over 50 percent for every 10 degree drop in temperature and by 10 percent for every 1 mm increase in precipitation.

“Right now, we have people entrenched in deep puddles of water from the rains, due to the refusal of a trash can being placed there and now trash is mix with these puddles in which people are living. There are no shelters there are no Eaves there is no place for these people to be.

“On August 6, 2020, the Centers for Disease Control and Prevention (CDC) issued Interim Guidance on Unsheltered Homelessness and Coronavirus Disease 2019 (COVID-19) for Homeless Service Providers and Local Officials. As I know that many of these things are not happening in Sacramento including priority housing, we still have seniors, chronic conditions, age, and everyone still living in these camps.  We are not receiving any resources on the ground, including: