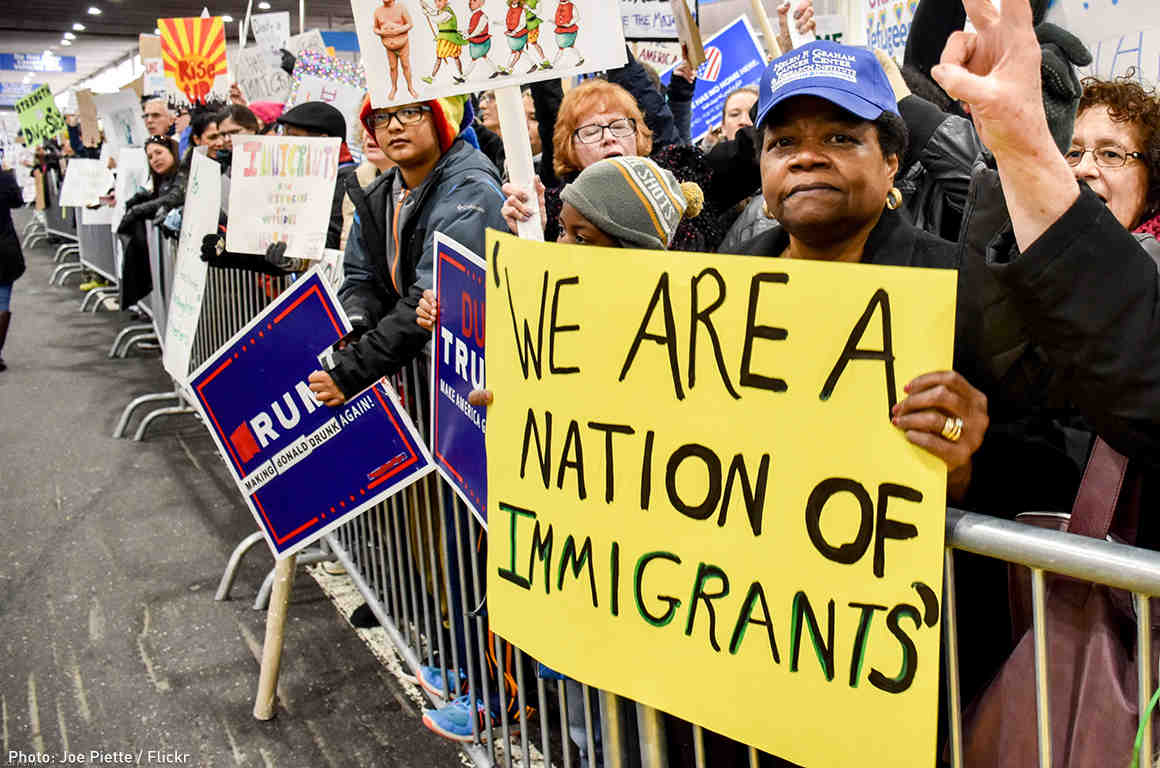 A deportation moratorium is a critical step to repairing the harm that has been waged against our immigrant communities and reimagining our existing system.

The past four years proved that the Biden-Harris administration must be bold and focused on overhauling the immigration system. The Trump administration has touted the “breathtaking” changes it has made to our immigration system. The changes are indeed breathtaking — in their dishonesty, abject cruelty, and white supremacist roots. The Trump administration has been single-mindedly obsessed with destroying our immigration and refugee system, using a global pandemic to upend it. On his way out, Trump is also shoving through “last-ditch efforts” at further harming immigrants.

Our border militarization and immigration enforcement machinery is overfunded, unaccountable, and increasingly lawless. It is this vast, “formidable machinery” that Trump has stretched to its limits, but the issue predates Trump. The last four years under Trump have

highlighted how cruel and unjust our immigration system can be — but also demonstrated the significant discretion the executive branch can exercise.

The Biden-Harris administration committed to an immediate moratorium on deportations. Hitting pause on banishing people from the United States acknowledges that our immigration system is deeply flawed — even more so after four years of Trump — but also provides the space to begin laying the groundwork for an audacious and inclusive vision for immigrants’ rights.

During a moratorium, the executive branch must immediately halt immigration enforcement and deportations while it works to undo policies like the Muslim ban, the public charge rule, the politicization of our immigration courts, and the evisceration of asylum. We know that just reversing course will be a massive task, but it is also not enough.
A moratorium also provides an opportunity for the Biden-Harris administration to reject our existing immigration system’s reliance on the punitive, enforcement-based approach driven by mass detention and mass deportation. This system costs taxpayers tens of billions of dollars a year.

The executive branch should instead invest in a humane and effective system focused on helping people navigate a byzantine immigration system and on a pathway to citizenship. In this reimagined immigration system, ICE and CBP would not use states and localities to funnel immigrants into the detention and deportation system, and would work to end racial profiling rather than engage in and encourage it. Immigrants would not be caged while going through the immigration system, but instead be with family and a support system as they pursue relief under the supervision of a judge. And the government would provide lawyers for people who are too poor to afford one because that is what fairness and justice demand.

There is a real opportunity and political will to reimagine our country’s approach to immigration: shifting from a detention and deportation-obsessed approach to one that is rooted in fundamental due process and human rights.

Take, for example, expedited removal, created by Congress in 1996 as part of a radical alteration of our immigration system. This law allows for summary deportations with virtually no safeguards — the antithesis of due process. As a result, many people do not have a hearing before an immigration judge before they’re ordered deported. In 2013, 83 percent of deportation orders did not come from an immigration judge.

Unfortunately, it’s gotten worse in the last four years. In 2019, the Trump administration issued an order vastly expanding expedited removal, which was halted until recently because of a lawsuit brought by the ACLU and its partners. While that lawsuit continues, and we hope to once again halt the expansion, the Trump administration currently has the ability to apply the summary removal procedures more widely than ever before.

The Trump administration’s move to expand the government’s ability to round up and hurriedly deport immigrants — especially as a pandemic rages on — is horrifying. So many of the people detained and deported by our government have lives, families, and roots in this country. It is impossible to gloss over their rights and humanity without irrevocably demeaning the values we profess as a nation.

It is clear that our existing enforcement infrastructure can no longer exist. A moratorium on deportations gives the Biden-Harris administration an opportunity to reset our system, and implement policies that will:

This is a unique moment in our history. We have faced unprecedented challenges this year, from a pandemic that has killed 318,000 people in the United States to thousands of protests nationwide fighting for Black lives and an end to racism in policing. Immigrants’ rights are inextricably linked to these moments: from our communities on the front lines of the COVID-19 fight to the disproportionate impact of enforcement, detention, and deportation on Black immigrants. While the ACLU works to achieve citizenship for all so that immigrants no longer live in fear, we will simultaneously push for a reimagined immigration system.

Madhuri Grewal is Federal Immigration Policy Counsel for the ACLU