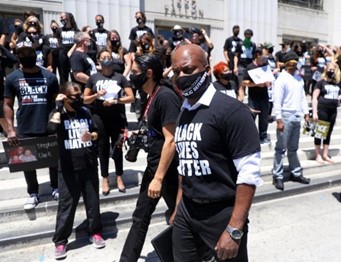 SAN FRANCISCO/ALAMEDA, CA – University of San Francisco law professor, Lara Bazelon, and Alameda County Public Defender Brendon Woods met virtually last week to have a conversation around the work of a public defender and how Woods works within that role to promote the Black Lives Matter Movement.

The conversation began around the discussion of why Woods eventually attended law school, and Woods stated that he had a single purpose: to be a public defender.

Woods articulated that there were no lawyers in his family and that law school was a foreign environment; however, despite choosing USF largely in part of location, Woods attributes his success in becoming a part of a support program at USF to further his dreams of becoming a public defender.

Known to be outspoken with problems with policing, bail, and placements on juries, Woods remains firm in his stance to voice his opinions. Although he does perceive it to be a concern, he understands that “our clients have voices. They have been silenced for various reasons…and I see part of my role as public defender to be outspoken.”

Woods stated his job requires that he be outspoken against the injustices that black and brown communities face, and “if people are not angry or uncomfortable, and I am not on the verge of being fired, I am not doing my job right. My job is to fight.”

Brendon Woods holds strong opinions on juror selections, in which he accounts for a lack of diversity within the system.

Even though Alameda County has a population of close to 50 percent Black, this isn’t represented in juries, and needless to say this is a statewide problem. Woods explained that this

underrepresentation in jury selections is based in history and systemic racism, whether people want to acknowledge the problem or not.

The Alameda County Public Defender’s Office has worked on reforms to create some diversity within the selection process, in which SB 310 was passed, whereby those with old felonies would be able to serve on juries.

In light of the statistics around what population of Black people are in the prison system, without this policy, many Black folks were kept from becoming jurors. The office championed this reform but still recognizes the need for more significant change.

Woods also noted the kicking off of Black people from juries, if they showed any issues with law enforcements or described any incidents where they had encountered law enforcement. Woods said that this has been mitigated to some extent.

The office has successfully increased the pool of jurors to select from, and continues to advocate for a policy that would pay jurors an hourly wage, similar to a regular job. This policy is rooted in the fact that many people of color have jobs in which they would face an enormous loss of income if they showed up in juries.

Woods was also asked about the effectiveness of Twitter and how he uses the platform in relation to his work as public defender.

In his role of public defender, Woods was always taught that public defenders should keep their heads down, but argues that they should take advantage of these platforms to tell people’s stories and show the injustices that they face.

Woods currently has a pinned tweet on his Twitter that received a lot of backlash. It states:
“I’ve been accused of being an angry Black man. Criticized for being too aggressive. Well…I am Black and I am angry and I have no choice but to aggressively fight for our clients, to aggressively fight to end systemic racism and white supremacy. No choice. #Defender #Battleready #BLM.”

Woods explained that this tweet was in response to changing the office’s mission statement to end white supremacy, and he described his shock from the enormous amount of backlash that he received because of it.

Woods recognized that the nation and the world has started to wake up on these issues, especially in the past summer, but he worries that the world again may have reached a point of complacency.

Prof. Bazelon noted that it is difficult for people to understand the core citation when they are not involved in criminal justice on a daily basis. Compared to Woods’s role as public defender and being surrounded by jails and courts, it is far different when you are on the outside.

Bazelon followed up on a point that Woods had made previously, regarding the need to appoint public defenders to the bench. Woods explained that there are sometimes bad judges he comes across who started off as public defenders, and “finding the right kind of people is hard for this job.”

Woods also stressed the importance of different people on the bench, including different perspectives and people of color.

As the only Black public defender in the state, Woods was asked to explain how more diversity could be created within the system. Woods believes that this phenomenon comes down to recruitment and processes. Certain places have a harder time recruiting people of color based on their location.

In addition to recruitment, Woods noted that the value these offices place on diversity is important, “since a lot of countries are very law enforcement centered, having a strong public defender makes people uncomfortable.”

On the topic of women’s incarceration and seniors 75 plus years and over, Woods noted that people should be willing to be uncomfortable and make uncomfortable decisions. Law enforcement wields a lot of power, especially in how we are supporting our communities and spending our tax dollars. Woods emphasized the need to reinvest our tax dollars to care for our communities directly.

Woods also commented on the system categorizing certain crimes that most people don’t give the benefit of the doubt towards, such as those accused with sexual assault, rape, human trafficking, among others.

Woods explained that he does agree these are serious crimes, but there is a serious overrepresentation from the Black community, and the system is designed to not get to the root cause of the matter.

Instead of asking “why this is happening or spending extra money on job training, education, grants, etc., we spend our money on prosecution and how we solve these problems by putting people in cages is only making it worse,” Woods argued.

The system operates on the assumption that all victims want the same thing: prosecution and time in a cage.

Most often, prosecutors will argue that they are defending the victim to support them. Woods emphasized that prosecutors don’t ask the questions of what they, the victims, need to heal; rather they lock them in jail for long periods of time.

Woods stressed the importance of more inclusion of restorative justice, especially because it has been shown to produce more healing for the victims, defendants, and our communities.

As Woods described it, “we see hurt people hurt people, but I just recently heard the phrase healed people heal people, and I think that is the philosophy we need to incorporate into our community.”

Bazelon also noted the difficulties behind restorative justice…people are forced to think about why they committed the harm in the first place and get down to the core issue.

In her experience, she states that “most people want acknowledgement of their harms, but I think the system is surrounded by not taking responsibility and that is followed throughout the entire systemic process.”

Woods explained his commitment to service the community, and stressed the importance of service within his office, interns, and staff. Not only does he look for a commitment to the community, but he also looks for a dedication and overwhelming passion to work for the client and fight for justice.

Woods found the same qualities in late Jeff Adachi, a former SF PD, who just recently had a book release earlier this week. Woods and Adachi had first met at USF, and later on, Woods discovered that Adachi set the standard for what a public defender should be.

Woods described his relationship with Adachi as he pictured himself as his little brother, and he strives to follow in his steps. Adachi embodied certain qualities, like service to the community, dedication to his clients, and being outspoken about issues, all of which Woods practices in his office.

In the words of Woods, Adachi “made being a public defender cool; he brought swag to it.”

Shifting towards the questions in the Q&A chat feature on zoom, Bazelon asked for a few questions from the members of the audience,

Woods was asked why phone calls weren’t free in jails, especially when studies have shown people to heal more in the presence of their family and friends.

Woods affirmed that phone calls should be free, especially during these times; however, he emphasized that the system is corrupt and devious in that it is here to “punish poor people and make life as miserable as possible, whilst making money off them.”

Woods was also asked about the caseload and the notorious lack of funding that public defender offices.

Woods acknowledged the limit of funds as a great hindrance to public defense work and Woods explained his blame on the system, in which he contributes it to a “flaw in design by government players.”

“There is one government agency that is there to set and hold police, DAs, prosecutors, and judges accountable, and get people out of jail; however, it is the only program that is less funded compared to others, and that is for a reason.”

Woods also noted an issue of importance within the jail system, in which 70 percent of people who are in jail have not had a trial, is to make sure calls in jails aren’t recorded unless there is a warrant.

The justification for recording these calls is always safety, “because it is always brought back to safety,” but we need to emphasize that jails cannot continue to become “warehouses for people.”

Woods stressed that “putting people into cages, it does nothing” and emphasized the need for services to directly help the community…our system is completely designed to dehumanize.”