For several years I have been warning that without a change to how the community grows going forward, we are facing a loss of quality of life and it will be harder to maintain our roads, our infrastructure and our schools—all huge assets to our community.

Sure enough, on Thursday the school board received a presentation showing declining enrollment, specifically of the resident student population over the next few

The report by Davis Demographics & Planning, Inc. found that “DJUSD will continue to have a declining resident student population.”

They note: “Over the years, DJUSD has been able to mitigate the impact of the decline from an increase in non-resident (out of district) student enrollment, maintaining a fairly level enrollment over the last 10 years.”

A big finding: “Future resident kindergarten population will be near pre-pandemic levels and then decline due to continued decrease in area birth and aging population.”

Even with that: “Enrollment is still expected to decline overall in the next five years.” 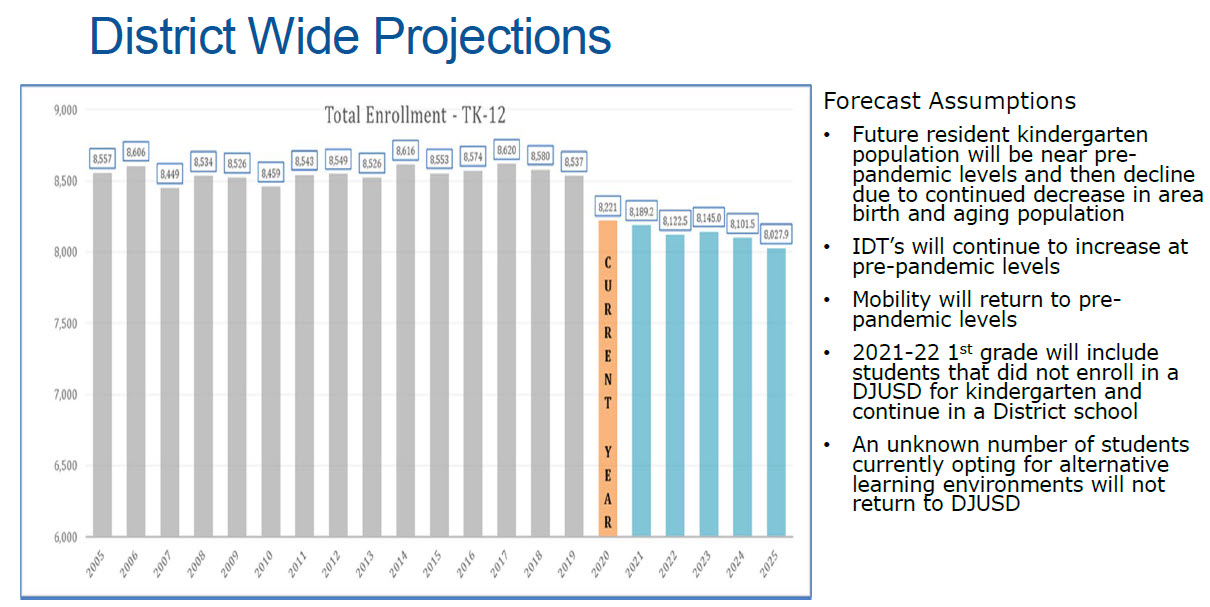 Second, there is a lack of new housing—especially for families.  While there are over 800 city-approved residential units planned within the next five years, “75% are apartments that typically do not house school age children.”  Most are designated as student housing.  While the report perhaps discounts the potential for the apartments to free up single family homes, the lack of housing currently planned beyond the currently approved units weighs heavily on this.

“Total enrollment has been fairly level over the last 10 years,” they found, but “resident student population (is) declining)” with “increased IDT’s (helping) mask decline.”

Davis Demographics predict that there will be a recovery of students as in-person learning resumes but a “continued decline of resident students,” while inter-district transfers (IDTs) increase.

Does this matter?  School finance is complex, but the basic problem that we have attempted to show is that declining enrollment puts a huge strain on a school budget because of reverse economies of scale.  Former DJUSD Business Associate Superintendent Bruce Colby used to estimate that the district would only save about 40 cents on the dollar for each declining student while it costs them their full ADA (average daily attendance)—roughly $10,000 (or more) per year.

As many know and as indicated, the district has stabilized its student population somewhat through out of district transfers.  This has become controversial in some circles—largely, I would argue, because they don’t understand the economics of school finance and the concept of reverse economies of scale.

Declining enrollment is generally the enemy of districts because it decreases the budget and, as former Superintendent of Business Services Bruce Colby explained to me, you can’t shed enough costs to offset the loss in ADA money.

Or to counter a prevailing sentiment on our comment board, you can’t right size a district because there really is no equilibrium.

Birth rate is definitely going down across the state, but the bigger problem in Davis is that we have an aging population.  (The article in the Enterprise this week is a bit misleading, Davis has a younger population if you factor in the number of students, but students are not staying here to marry and have children that attend schools).

A big factor then is the lack of local housing growth coupled with the increased cost of housing that is forcing the younger demographic that would have children to live elsewhere.

Watching the enrollment figure, therefore, is a leading indicator of what is happening with our demographic.

Right now, as Superintendent John Bowes noted, “We have been bringing in students on inter-district transfer to help shore up declining enrollment.”

But that may not last forever.  Scott Torlucci, a senior project manager at Davis Demographics, in response to a question from Vigdis Asmundson warned that there is a real possibility that interest in inter-district transfers will be saturated at some point.

He did say, “You guys have a spigot and as long as you keep it open I believe you have enough people in the area that are going to want to join and come to Davis Joint Unified School District.”

The majority of the transfers are students with UC Davis-affiliated parents.  But again, keep in mind, one reason we are seeing a lot of that is that those people used to live in Davis—now more and more, even on a faculty salary, they can’t afford to.

But in the meantime, the decline in enrollment looks to continue.  And unless we are concerned about the changes in the demographics of this community, that is not going to stop.

21 thoughts on “Monday Morning Thoughts: The Canary in the Coal Mine – Declining Enrollment”