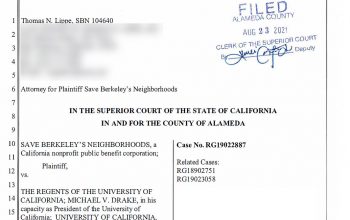 It is an issue that figures to resonate in places like Davis, which already see community concerns about growth butt up against university plans for student enrollment expansion.

This week the Berkeleyside reported that an Alameda County judge has ordered UC Berkeley to freeze its enrollment at 2021-21 levels until the university re-does a SEIR for a proposed housing site.

The Berkeleyside reports: “The order to freeze enrollment comes a little more than a month after Judge Brad Seligman ruled that UC Berkeley abused its discretion when it failed to study the impacts of increasing its enrollment by 33.7%, or 11,285 students, from 2005 to 2020.”

“The ruling is not only a victory for neighbors upset with UC Berkeley’s growth and its mitigation measures, but for other communities in California struggling to deal with UC campus impacts, said Phil Bokovoy, the president of Save Berkeley’s Neighborhoods, which filed the original lawsuit,” the publication reported.

“This is how UC is behaving in lots of different places — forcing its impact on communities and not doing anything about it,” said Bokovoy. “It’s the first time a judge has said UC cannot continue to grow and has frozen

The university responded, “We are optimistic that we can file documents with the court very soon that will satisfy the judgment with regard to future increases in enrollment.”

These battles tend to be fought on very narrow grounds.  But it is emblematic of a larger battle between communities battling to contain growth that is somewhat out of their control when UC is involved and the need for UC to continue expanding.

It is a battle that the city of Davis should be watching very carefully as it pits neighborhoods against students and the university.

The parameters of this fight should be very familiar.  Berkeley has plans to to transform an area around Heart and La Loma Avenue, which they unveiled in 2018 including a 150-bed housing complex – this one for faculty.

Save Berkeley’s Neighborhoods, as well as the City, sued, arguing “the SEIR was inadequate and did not comply with CEQA, the state’s environmental law.”

The City in particular is complaining “the university was trying to sneak a huge growth in student enrollment into the SEIR without examining its impacts and the costs to Berkeley for providing emergency services.”

Again a lot of this should sound familiar to Davis residents.

One thing I continue to wonder – do these lawsuits actually stop growth or do they just make it more expensive putting the burden on those who can least afford it – usually the students whose access to housing is delayed and the ensuing delays increase the cost of housing for all students?

One of the key points that gets lost is that student enrollment growth, while seen as a money-maker for the university – is actually a huge driver of benefits for students.  Enrollment growth has been put forward as a mechanism for delaying tuition and fee hikes for one thing.

But there is also a social equity issue.  A huge driver of economic advancement in today’s society is in fact a college education.  As the leading public higher education system in the world, the UC system is literally the gateway out of economic hardship and poverty for thousands of students.

At UC Davis for example – 41 percent of all freshman enrollees are first generational college students.  That means many of them grew up in working class or disadvantaged or immigrant households and the additional access to high caliber higher education is their gateway to a better future.

And so when I hear about people complaining about UC Davis expanding their enrollment and forcing housing growth on the community – I think about the people who have established affluent, prosperous lives – and while I don’t think they are doing it intentionally necessarily – that argument creates a push back against the potential future prosperity of many people who are on the margin of getting into college.

Clearly there is a middle ground that can and should be reached that balances the needs of the existing members of the community with those of the university and its students.  But at the core this is in fact a social equity and a social justice issue.

Housing and access to it is the fundamental issue right now driving the divide between the haves and the have nots.  This is simply a small proxy battle in the midst of that larger argument.

52 thoughts on “Commentary: Community Versus Students, This Time It Was in Berkeley, Next Time…”