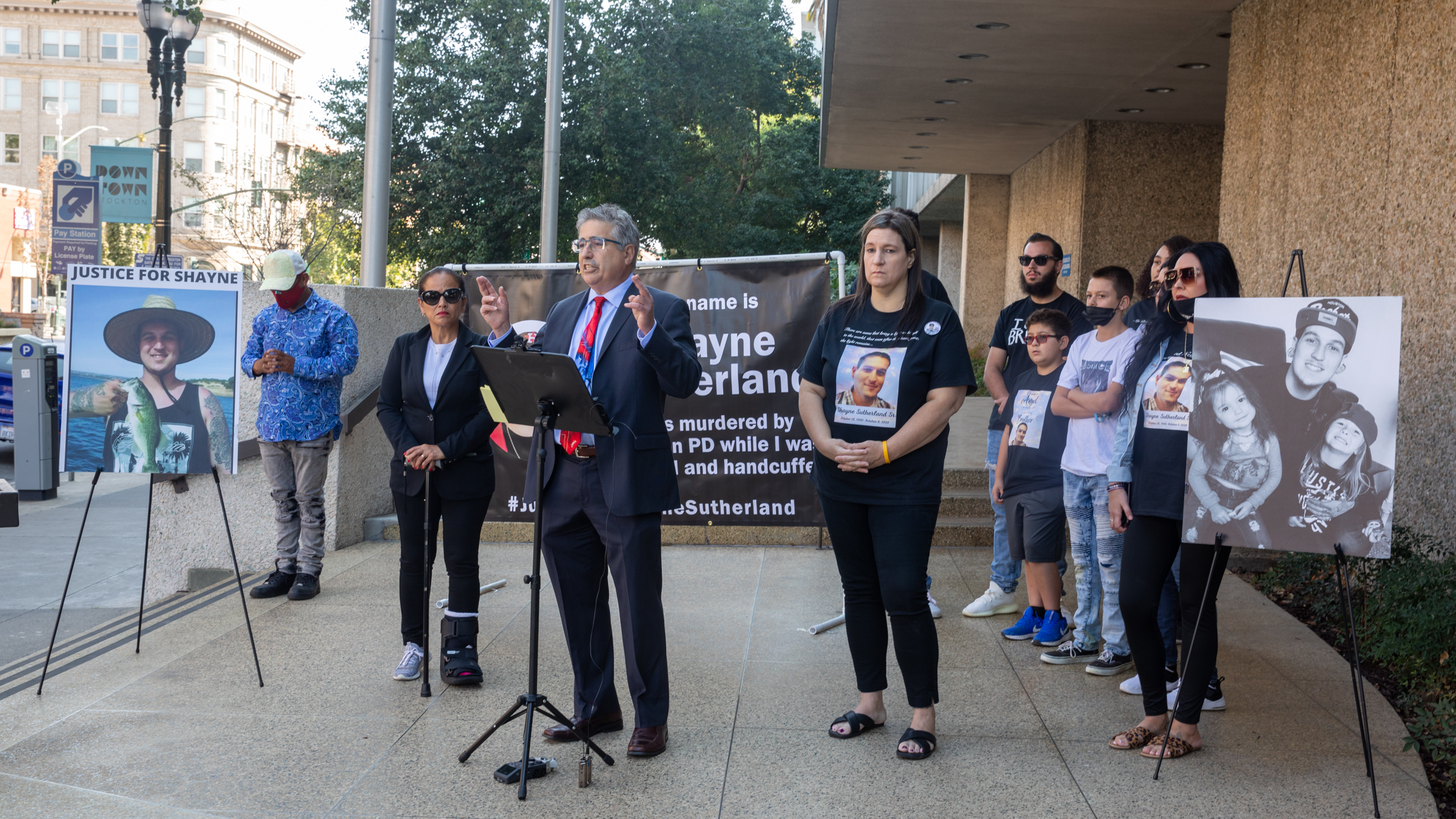 Stockton, CA – Nearly one year to the day from the time that 29-year-old Shayne Sutherland was pronounced dead (October 8, 2020), his family announced in front of the San Joaquin District Attorney’s Office that they were filing a lawsuit.

The family is alleging that two Stockton Police officers “used excessive force on an unarmed and handcuffed man, applying full body weight pressure and a police baton to the prone victim’s neck, shoulders and back, resulting in restraint asphyxiation.”

Civil Rights Attorney James DeSimone said during a press conference on Tuesday that they have filed a civil rights suit against the city of Stockton, “[b]ut ultimately we are calling for the criminal prosecution of those officers because, based on the facts, they unnecessarily took a life and used excessive force where really none was warranted.

“Shayne’s unnecessary death is another result of the SPD’s unconstitutional practice of using improper restraint and excessive force,” said DeSimone.  “At the time he was killed, Shayne was unarmed, handcuffed, in the prone position, not resisting, and posing no harm to anyone. Still, while he pleaded for his life, at least one police officer used his full body weight to literally crush the breath out of him. This violates well-established law enforcement standards and training, and the United States Constitution. This has to stop.”

His attorney described that Sutherland was at an am/pm, and he asked for a taxi.

“Obviously something’s not right,” DeSimone explained.  “Shayne is disturbing customers, maybe causing a disturbance.  But when the officers arrive, Shane leaves the store compliant with them. He puts his hands behind his head. Interlaces his fingers spreads his legs. They search him. He has no weapons. He sits on the ground and is compliant with those police officers asking questions.”

At this point, his attorney acknowledges he made “what turned out to be a fatal mistake.”

“In a moment of panic, he stood up, he took two steps, and he basically just turned into the arms of the officers,” DeSimone said.  He maintained that Sutherland was not trying to flee at this point.  “He wasn’t going anywhere.”

The police then immediately took him to the ground, and they handcuffed him without further incident.

“This wasn’t enough for the officers,” DeSimone said.  “They, after handcuffing him, began to place full body weight. And one of the officers took out his baton and presses down on Shane’s back, his shoulders.”

At this point Sutherland apologized to police and showed no further resistance.

The family charges that, despite this cooperation, at least one of the officers applied his baton, arm and body weight to Sutherland’s neck, back and shoulders.

Further, they ignored Sutherland’s increasing distress, his complaint that he could not breathe, and on the video Sutherland is heard saying “I’m f***ing dead.”

Moreover, as he lay motionless on the ground, the family charges that the officers delayed and failed to adequately provide medical assistance to help revive him.

DeSimone explained, “As you could see him, struggling for breath. This went on for close to three minutes. As these officers didn’t get up and they didn’t let up.”

The family has hired Dr. Bennet Omalu, one of the preeminent forensic pathologists in the State of California.

The San Joaquin Coroner’s Office determined that the caused of death was an accident.

“Dr. Omalu concluded that the cause of death was restraint asphyxiation.”

He said, “This is not a surprise. This has not come out just with the George Floyd, that if you have a person prone on the ground with their handcuffs behind their back, it cuts off the airway to the heart and to the brain and people die. Law enforcement has known this for decades.”

“I can’t begin to tell you the absolute devastating loss that I as a mother feel every single day. It’s a constant nightmare. I wake up to every single day and it was not justified. My son was of no threat,” Sutherland said.

From her perspective, he was complying.

“There was no reason for those officers to what they did,” she said.  “With my son begging and telling them I can’t breathe.” 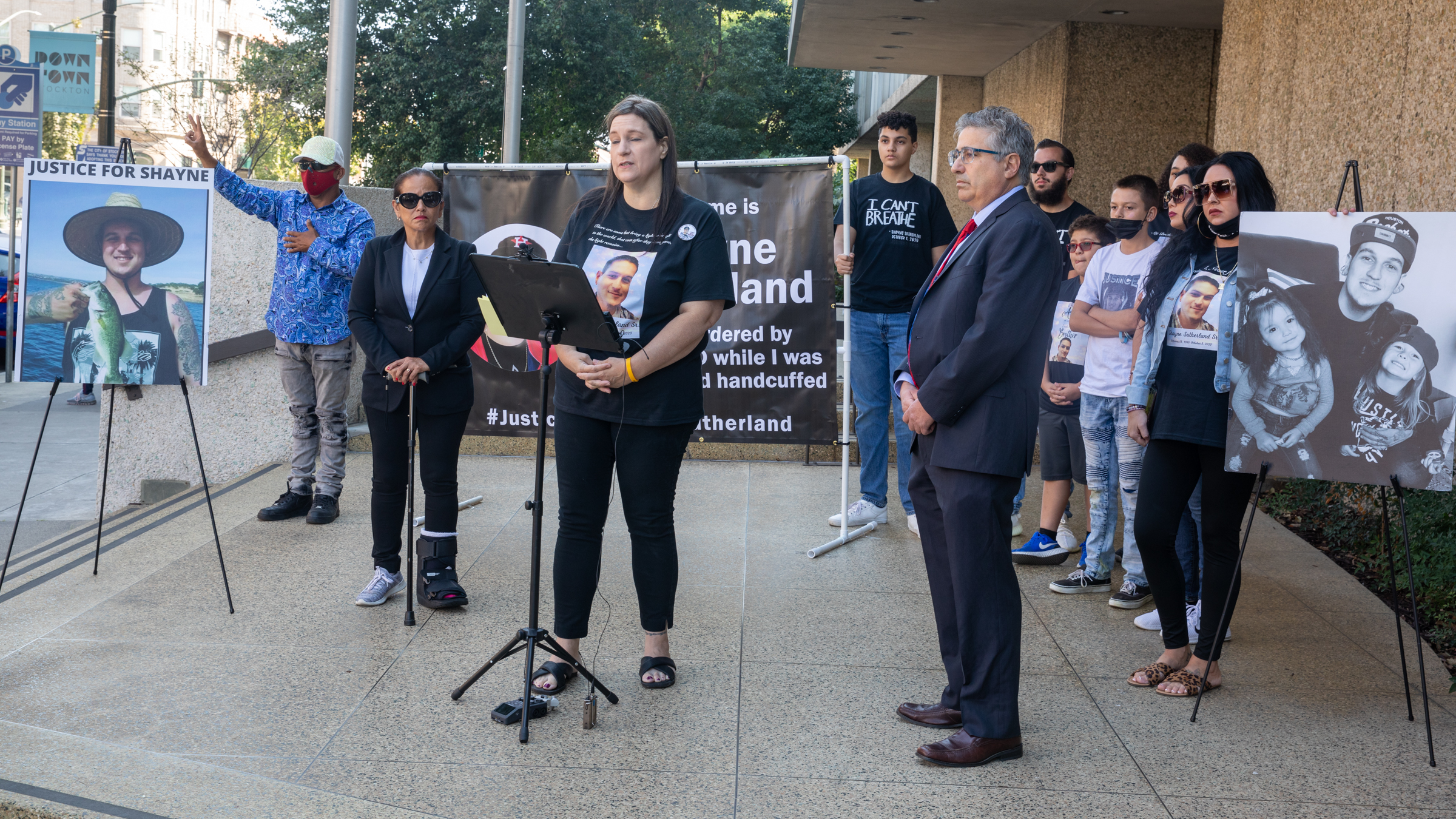 He pointed out that in the State of Minnesota, they were able to file criminal charges against Derek Chauvin days after viewing the video of George Floyd’s death.

In an unrelated Stockton PD excessive force case, they pointed out, officers were fired and recently indicted on felony assault charges for the assault and battery of a Black teenager.

After Sutherland’s death, DeSimone requested that the California Attorney General and San Joaquin District Attorney conduct an independent investigation of the SPD, its use of force policies and procedures, and file charges against the officers.

His family is seeking compensatory and punitive damages from the city and police department over the wrongful death. Named in the lawsuit are the City of Stockton, the involved SPD officers, Ronald Zalunardo and John Afanasiev, and Police Chief Eric Jones.

Neither the police nor the DA’s office would comment to the Vanguard about the ongoing investigation.

Elisa Bubak, the PIO from the San Joaquin County DA’s office, issued a statement to the Vanguard: “The San Joaquin County District Attorney’s Office is dedicated to ensuring public safety, equitable justice for all, and advocating for victims. Transparency is a key component to strengthening trust with the community we are privileged to serve.”

She added, “Shayne Sutherland’s case is under investigation. Further inquiries regarding body worn camera footage should be directed to the Stockton Police Department.”

Meanwhile, Joseph Silva, the PIO for the Stockton Police stated, “This incident remains an open multi-agency protocol investigation and is still under review by the San Joaquin County District Attorney’s Office.  Pending anticipated litigation, we cannot discuss this matter any further.”

To read a copy of the complaint – https://www.davisvanguard.org/wp-content/uploads/2021/10/Sutherland-Complaint.pdf