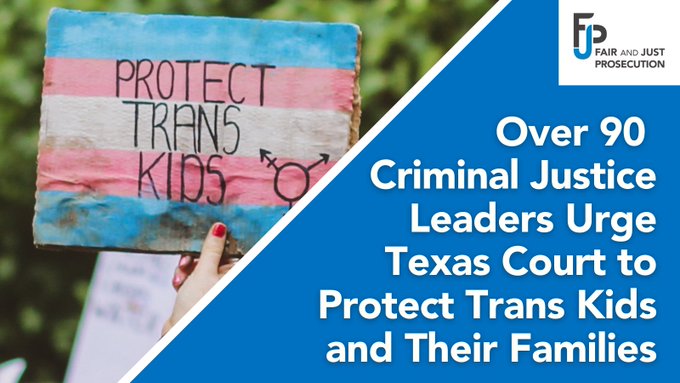 Austin, TX – Following an announcement that the State of Texas intends to prosecute parents who seek gender-affirming care for their transgender children, a bipartisan group of 93 criminal justice leaders from around the nation – including current and former prosecutors, law enforcement leaders and Attorneys General, and former Department of Justice officials and judges – filed an amicus brief in the 353rd District Court of Texas in Jane Doe v. Greg Abbott, supporting efforts to block the State of Texas.

The signatories argue that Texas Governor Greg Abbott’s directive to the Texas Department of Family and Protective Services (DFPS) to investigate, and potentially prosecute, these parents for child abuse – and to involve medical professionals, others who care for children, and even members of the general public in this mandate – will result in grave harm to already vulnerable young people. As noted in the brief, these divisive and deeply troubling policies erode public trust in the integrity of the justice system, and thereby inhibit the ability of law enforcement to keep communities safe.

“Instead of promoting policies that can actually make our communities safer and healthier, some state leaders in Texas have decided their priority is to attack the trans community and criminalize life-saving care,” said Miriam Krinsky, Executive Director of Fair and Just Prosecution, the organizer of the brief, and a former federal prosecutor. “At a time when trust in government is in dire need of fortifying, this

unthinkable action will only serve to deepen biases and divides in our community, put loving parents and their children at risk and further marginalize an already vulnerable population. And all of this inevitably will erode faith in the rule of law – an essential ingredient in maintaining public safety.”

The signatories emphasize in the brief the devastating impact the Governor’s actions will have: “By singling out families with transgender children for government interference and opening the door to intrusions into the privacy of deeply personal medical care, while also triggering potential family separation and even prosecution based on clinically recommended treatment, Governor Abbott, Commissioner Masters, and the Texas Department of Family and Protective Services have profoundly threatened both public trust and the well-being of these children and their loved ones. Mandates and policies such as these create troubling and destructive barriers between members of vulnerable communities and law enforcement and will only increase the risk of victimization, abuse and violence these individuals face.”

“When the public does not believe the government is working for them and is instead actively doing harm, our entire system of public safety crumbles,” said Bexar County, Texas District Attorney Joe Gonzales, one of a number of elected prosecutors in Texas and around the nation to join the brief. “As an elected prosecutor, I have an obligation to pursue justice, and it would be completely unjust to punish parents simply for providing their children with the care they need.”

“Why would people call law enforcement to ask for help when they believe that the government is utilizing its resources to prosecute loving parents?” said Joseph Brann, former Hayward, Calif. Police Chief, former Director of the DOJ Office of Community Oriented Policing Services and another signatory to the brief. “Anti-trans laws undermine the integrity of the criminal legal system, which makes the job of law enforcement even harder and compromises public safety.”