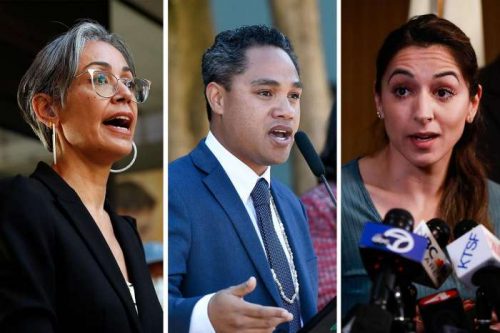 San Francisco – The contentious San Francisco Board of Education recall effort resulted in a major win for investors and venture capitalists alike on Feb. 15, when 76% of San Franciscans voted to remove board members Gabriela Lopez, Alison Collins, and Faauuga Moliga.

While these results show overwhelming support for the recall, the special election’s turnout rates do not offer the same urgency. The 2020 Board of Education election brought out more than 86 percent of eligible San Francisco voters, while this special election only brought out 34 percent of voters. “I think the most frustrating thing was that a lot of the working-class parents in my community didn’t even know about the election,” said Julie Roberts-Phung, Co-chair of the No School Board Recall campaign.

The dynamics of special elections are not new to Californians, as several others have materialized throughout the state within the past few years, including the recall of California Governor Gavin Newsom in 2021 and the ongoing recall against San Francisco’s District Attorney Chesa Boudin. In all three of these recall efforts, activists have scrutinized corporate funding educators. Special elections like these are opportune for those with business interests, as “in a regular school board election there is a funding cap of 500 dollars per person, but in a recall, there is no funding limit”, said Roberts-Phung.

Supporters of the recall campaign cited the board’s money management, their attempt to integrate Lowell High School, and the renaming of schools formerly named after slave-owners as reasons to remove the three members from office. Frank Lara, Executive Vice President of United Educators of San Francisco (UESF), believes that while there were parents who did support the recall effort, they needed to “align themselves with right-wing elements, with venture capitalists, because they don’t have the majority of the public’s support.”

Venture capitalists David Sacks and Arthur Rock were some of the recall campaign’s largest donors, alongside other investors. Lara attributes investors’ interest in this election to the fact that SFUSD is one of the city’s largest landholders;  investors in San Francisco have a vested interest in privatizing public land. “They saw an opportunity in a moment of crisis when we were all trying to provide students and teachers with basic safety measures….when we saw a crisis, they saw a business venture,” said Lara.

Rock, who has donated more than $500,000 to the recall effort, has also funded school board elections in more than ten different states and has given 12 million to charter school groups across the country. San Francisco is one of the only urban areas in the United States that does not have a large charter school presence. The past five years have seen great expansion in the privatization of public schools in Chicago, Oakland, Los Angeles, and New Orleans. The Charter school industry is a booming business, and SFUSD schools “are ripe for industries looking to profit off of public institutions,” said Lara.

A 2017 study by the U.S. Department of Education found “no measurable differences in average reading or mathematics scores on the National Assessment of Education Progress” between charter and public school students. Yet despite these results, the charter school industry is worth 54 billion dollars as of March 2021. The number of schools and the industry’s size has grown an average of 5 percent each year since the study was released.

Recalled board member Collins has spoken out against the privatization of schools, telling SF Weekly, “Charters are circumventing local control. We have very little power over fixing things and holding them accountable”. The board as a whole clarified its stance on charter schools in 2020 when members voted to reject the district’s request to hire a reopening expert because of his previous experience contracting with charters.

Sacks, another investor, has been outspoken about his financial support for the failed recall of Newsom in 2021. He has no direct connections to charter schools, but he has invested in countless San Francisco based startups who may be looking to expand their businesses. Sacks also voiced his opposition to unions in dozens of tweets, several in response to UESF’s demand for safe COVID procedures like vaccinations and rigorous testing prior to returning to in-person teaching last year.

Lara, a member of UESF, said the city government blamed the union countless times for the failure of the state government to provide safety for workers and the Board of Education for supporting union members during their campaign. “We saw that the folks lining up against this particular Board of Education were very much tied to privatization, to charter movements, and to the mayor’s office, which we have not felt supported by,” said Lara.

Pacific Gas and Electric (PG&E) contributed more than 25 thousand dollars to the recall effort. Roberts-Phung believes the company’s interest in funding the recall could stem from the fact that San Francisco has been attempting to buy out PG&E and create a public utility company after city officials found that PG&E overcharged customers in 2021. “This is an example of PG&E feeling like it’s a bargain to be able to pitch in about $30,000, and potentially pick the folks that will eventually be on the board of supervisors,” said Roberts-Phung.

According to recall opposers, these factors show that this election was not just about the decisions of individual board members, but instead reflects the larger issue of money’s role in politics. “We were outspent 40 to 1, the recallers spent about 20 dollars for every voter they moved to the polls,” said Roberts-Phung; “on one hand it means billionaires can buy recall elections, but on the other hand, it means there will be a more level playing field in November.”

All three recalled board positions would be on the ballot this November, and turnout is likely to be triple that of the recall election. Both Lara and Roberts-Phung believe that San Francisco voters have shown their dedication to progressive board candidates in years past. However, Lara says the only way to ensure November is a more democratic election is by “building up the dream of quality public education” and “continuing to build trust among families, educators, and students.”

Claudia Drdul is a writer for the Vanguard’s Social Justice desk and a student at the University of California, Berkeley.