Fentanyl was the topic of discussion at the Commons Town Hall meeting from the Yolo County District Attorney’s office on Tuesday.

Fentanyl is a synthetic opioid used to treat severe pain and is usually prescribed by a doctor after surgery or for a cancer patient according to Raven.

In the United States, 73 percent of all drug overdoses in 2019 were from fentanyl according to the Center for Disease Control (CDC).

Fentanyl is made more dangerous by it being manufactured in clandestine laboratories and sold by fentanyl dealers and laced in other drugs.

“It’s cheaper and easier. It doesn’t take a lot of effort to maintain and create it,” Raven said.

According to Raven, it is often laced in heroin, methamphetamine, and even other prescription drugs.

Seventy-five percent of street oxycodone pills are counterfeit and of those, 92 percent are straight fentanyl according to the Sacramento Crime Lab.

“There’s lots of it running around Yolo County,” Raven said.

CCHC is the largest federally qualified health center in Yolo County which sees about one out of nine people in the county according to Cook.

Cook, a youth services coordinator, says CCHC has been providing substance use programs since its inception in 1972 and is the primary provider for those covered by MediCal or Medicare.

In Yolo County, 32 people died from a drug overdose in 2020 and 8 of them were fentanyl.

In 2021, 12 people died from a drug overdose and 7 of them were killed by fentanyl poisoning.

Three people have died from fentanyl poisoning this year already according to Raven.

Jake Lee died of fentanyl poisoning on April 11, 2021, after taking what he thought was Percocet but was pure fentanyl according to Kristy Lee, his mother.

“I don’t know that I would have done anything differently. I did everything I possibly could have as a parent,” Lee said.

However, she said if she knew about fentanyl test strips and other forms of harm reduction that she would have made sure they were available to Jake.

“Without judging him, if I had those tools then I absolutely would have used them,” Lee said.

Lee wants other parents to embrace the concept of harm reduction and to try not to be judgmental of their children if they suffer from substance abuse.

“People have agency and are going to do things even if you don’t like it,” Lee said. “Don’t judge, your goal is to keep them alive.”

Lee also wants parents to enjoy every minute they can with their children.

“You can’t control them, they’re their people so just make sure you enjoy as much time as you can with them,” Lee said.

Cook said one myth about fentanyl is that it’s safe if it came from a doctor.

“Even people who were prescribed it can not realize how much they become addicted. Anyone can get addicted,” Cook said. 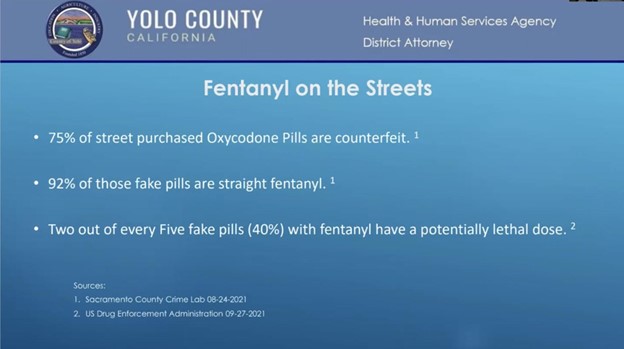 Another myth is that the body’s tolerance to pills doesn’t decrease and always stays the same.

“This is just not true,” Cooks said.

Raven said in years past not much would be done at the scene of overdose death.

“The police and coroner would come out to the scene and not much beyond that was done,” Raven said.

He says they now focus on what crimes may have been committed.

Raven says the DA’s office is looking at fentanyl use as a health issue as opposed to a criminal issue.

“We’re diverting cases rapidly compared to how we were in mid-2020,” Raven said. “Again we’re trying to deal with this as a public health issue and not a public safety issue.

Share:
Tags:FentanylJonathan RavenYolo County District Attorney
Previous : Guest Commentary: Children Deserve Protections that Too Many Aren’t Getting in the US Justice System
Next : Commentary: A Closer Look at Some of the Former Prosecutors Who Have Come Out Against Boudin